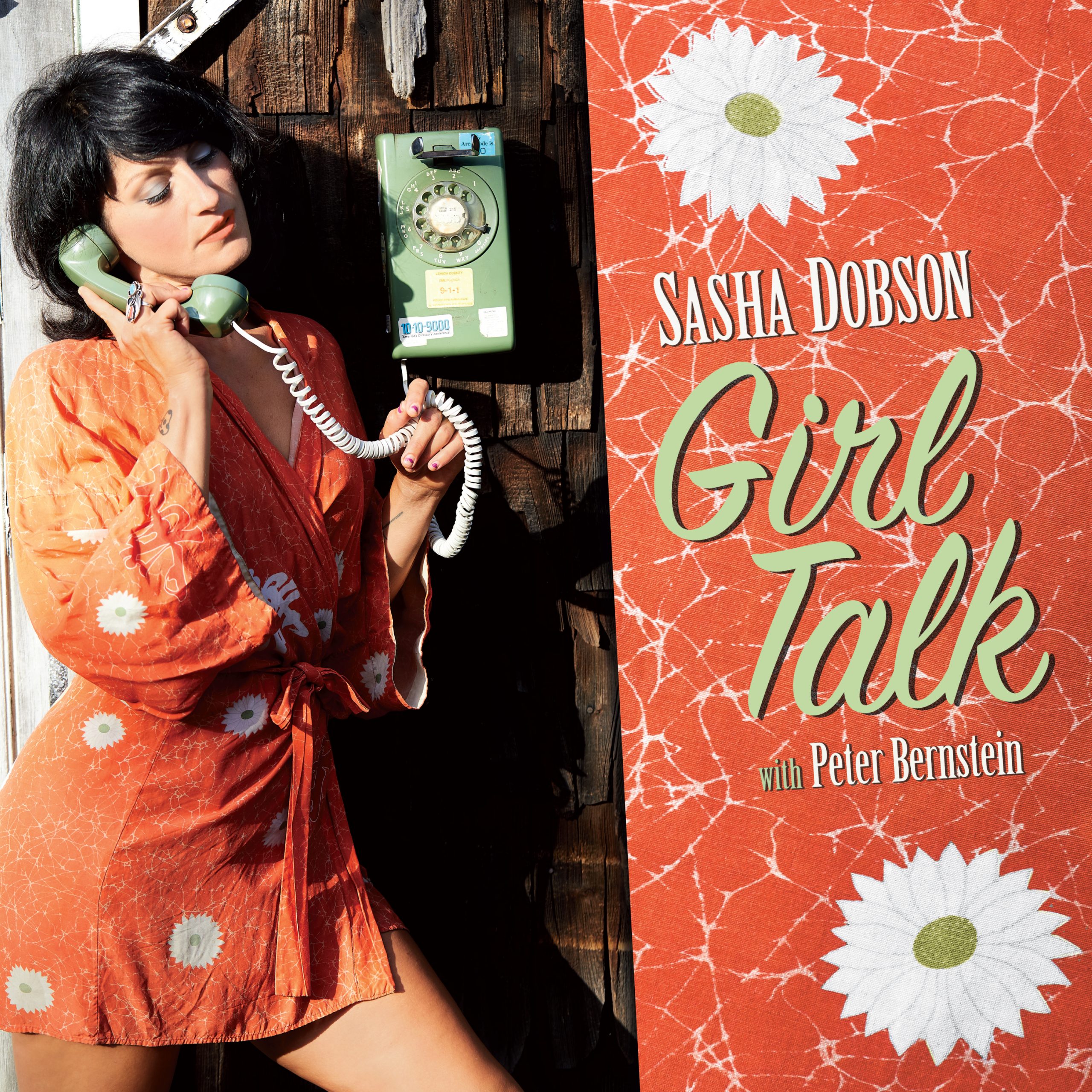 “Dobson has the genes and a strong musical foundation to make powerful, uplifting music” — NPR Music

“An eminently listenable voice: sensuous but diffident, and devoid of showy pretense” — The New York Times

“[Sasha Dobson] has jazz in her genes” — San Francisco Chronicle

Singer, composer, master lyricist and multi-instrumentalist Sasha Dobson has performed across the world as both a leader and first-call collaborator. The stylistic chameleon has released projects with such defining voices as Norah Jones, Chris Byars, Don Was, Jay Lane, Jesse Harris, Mikael Jorgensen and Charlie Burnham; she has composed with Bill Murray, opened for Willie Nelson and toured with Neil Young. Now, with the release of Girl Talk, Dobson issues her most personal recording to date. Ten tracks of original compositions and enduring favorites feature a core trio of Neal Miner on bass, Dred Scott and Kenny Wollesen on drums and album guest artist Peter Bernstein on guitar — and unveil Dobson’s intrinsic fascination with spontaneity and the resonant bebop tradition. Girl Talk will be available as a digital download, CD and vinyl LP on September 10, 2021.

Girl Talk has received worldwide critical acclaim since its release, including accolades from Jim Hynes at Glide Magazine, who says this record “is Dobson showing us what she was raised to do.”

Dobson’s video for the single “The Great City” is out now. The charming music video was featured as the Video of the Day on All About Jazz on Thursday, August 5. You can view it here.

“Over the years, I developed into a guitarist and songwriter,” says the New Yorker, “But in my heart and soul, I am a jazz singer and improviser. And this album represents something essential that I needed to do.”

Dobson’s wit resonates across her phrasing. Raised inside the music by her father, pianist Smith Dobson who played for two decades with Bobby Hutcherson, as well as Art Pepper and Red Holloway, and her mother, highly sought vocalist Gail Dobson, a young Dobson internalized nuances of the music early in her artistic development. That active listening and sense of time has allowed her to craft a self-renewing career among countless diverse expressions, but she always returns to the music that’s a part of her.

“I’ve loved playing in diverse projects as a guitarist, drummer and vocalist, but I am always listening to jazz when I am home. That’s my happy place,” she says.

Now she’s released her own. A fiercely receptive interactivity emerges on Girl Talk at every turn, particularly between Dobson and Bernstein. “There’s something about working with Pete that just sparked a flame,” says Dobson. “I felt motivated to push forward through these ideas — kind of what I set out to do in New York as a jazz singer and as an artist.”

Engineered by Colin Monacs and Andy Taub, and mastered to digital and vinyl by Vadim Camby and Bill Scibbe, respectively, Girl Talk came together in two sessions with Dobson at the production helm. Written between the band’s first studio date before the pandemic hit, and their second, scheduled during the lockdown, Dobson original “Better Days” features Wollesen on drums and spotlights her sophisticated concept of harmony, master-level song interpretation and deep connection to the blues no matter which feel she’s channeling in the moment. Throughout “You’re the Death of Me,” another of Dobson’s originals, she and Bernstein sit in a groove together, buoying each other from one phrase to the next.

The album’s title track showcases Dobson’s effervescent, at times wry sense of humor as well as her sacred connection with longtime collaborator and close friend, singer-songwriter Norah Jones who recorded backing vocals to the Neal Hefti tune remotely during the lockdown. Despite the artists recording their parts at different locations and times, Dobson’s lock-in with Jones reflects their intuitive pacing and phrasing as well as Dobson’s expert storytelling. “The lyrics are a little quirky and subversive,” she says, “a little counter, counterculture [laughs].”

“The Great City” crept into Dobson’s consciousness during the lockdown. At a time when she witnessed New York gutted from the inside, she meditated on its pain and resilience, electing to film a music video as a tribute to the city she loves so much. Bernstein proffers a swinging statement on the Curtis Lewis composition, while Dobson’s signature improvising follows the head out. Miner’s presence on Girl Talk extends beyond the low end. Apart from a strong pulse and melodic foundation, his contributions include arrangements for “Sweet and Lovely,” “Softly as in a Morning Sunrise” and “Autumn Nocturne.”

“Neal is one of my best friends of all time,” says Dobson, who connected profoundly with the bassist-composer in Manhattan’s West Village when she was 18. The two have been playing together for more than 20 years. Their hookup during live performances radiates from the bandstand and pulses across Girl Talk whose title track Miner introduced to Dobson. “After years of collaboration,” says Dobson, “we are one and the same when it comes to feel, tempos, arrangements and repertoire.”

Dobson feels fortunate to have world-renowned Brazilian percussionist and good friend Mauro Refosco contribute nuances of mood on “Perhaps, Perhaps, Perhaps” and “These Boots Were Made for Walking,” along with Steven Bernstein and Ian Hendrickson Smith. “Mauro is the cat,” says Dobson, who frequently plays off his choices and against elastic grooves he pulls and bends and integrates from countless regions across the world.

Apart from two dates in the studio with her core trio, the pandemic compelled Dobson to lean heavily on tracking as she added personnel and prepared the album for mixing — a practice the sonic purist never thought she’d engage, but one that offered unexpected perks, including vital remote contributions from her brother, vibraphonist and multi-instrumentalist Smith Dobson, based in San Francisco. The sibling-artists were able to collaborate for the first time. “He’s an incredible musician and one of my favorite drummers,” says Dobson, “but he’s also a chameleon like me.”

“All the records I’ve made in the past — under my name and as collaborations with other artists — have been an explosive new learning experience,” she says, “but the one thing I haven’t done in my 20-year career so far is record what I can do, and what I was raised to do.” For Dobson, it sure is good to be home.

Sasha Dobson has performed all over the world in diverse contexts as a leader and first-call collaborator. The singer-songwriter and multi-instrumentalist represents one-third of hit trio Puss n Boots, alongside Catherine Popper and Blue Note Artist Norah Jones, with whose band Sasha has toured fairly regularly for the past eight years. As a guitarist and songwriter, Sasha bonds intuitive phrasing and refined storytelling chops with her honest, witty lyric-writing. Daughter of vocalist Gail Dobson and highly sought pianist and arranger, the late Smith Dobson, Sasha developed a core understanding of the lineage of jazz from an early age — one that has allowed her to develop into the powerhouse singer and multi-instrumentalist she’s become. In addition to traveling the world as a three-dimensional performer, Sasha spent her early days in New York hitting as a leader at many of the city’s noted venues including Jazz at Lincoln Center and Smalls Jazz Club where she and her band are a regular fixture. In recent years, she’s led her own project at Farm Aid and opened for Willie Nelson. In 2020, Sasha released Simple Things, her anticipated EP featuring Don Was on bass and production and Jay Lane on drums. Her 2021 release of Girl Talk featuring guitarist Peter Bernstein reflects her most personal contribution to the music to date.