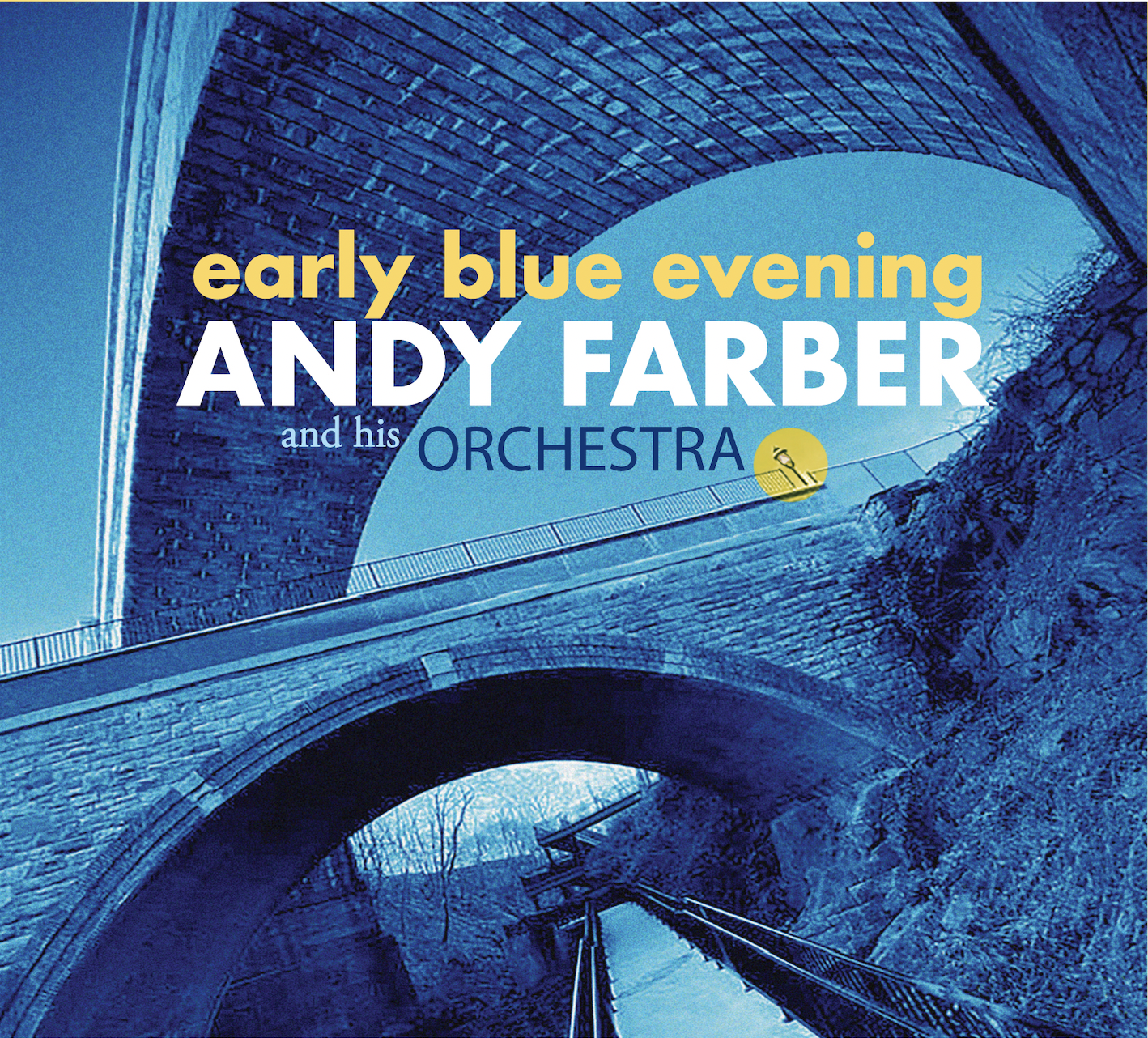 Saxophonist, arranger, composer, and bandleader Andy Farber is pleased to announce the August 27, 2021 release of Early Blue Evening, the second big band release from Andy Farber & his Orchestra and Farber’s fourth release as a leader. Over 11 tracks, Farber’s 17-piece big band speaks the foundational language of big band’s forebears — swing and the blues — in a decidedly contemporary dialect, navigating nine originals and two Farber-arranged standards with a rare, elegant blend of verve and verisimilitude that is, at once, inspired by history but never bound by it.

Farber “doesn’t recreate specific existing charts or records,” writes noted author and music critic Will Friedwald in Early Blue Evening’s liner notes. “Nor does he slavishly strive to make everything sound as contemporary as possible. He has found a viable and exciting middle path, expanding the legacy of Duke and the Count, rather than strictly recreating their work.”

Farber is aided in the execution of these humble yet lofty ideals by a band consisting of many of his oldest and closest friends. Anchored by a rhythm section of Adam Birnbaum (piano), Jennifer Vincent (bass), Alvester Garnett (drums), and James Chirillo (guitar), this is a group that came together as the on-stage band for After Midnight, the Broadway revue of Jazz Age nightclub fare from the likes of Ellington, Jimmy McHugh, Dorothy Fields, and Harold Arlen. Listening here to the band’s first recording together since that production’s 2014 closing, one quickly perceives a molecular-level chemistry that comes from having played nearly 300 performances together.

Listeners will notice this chemistry manifest itself in myriad contexts. On the album’s more straight-ahead blues tunes— “Don’t Tell Me What to Do” and “Aircheck”—you’ll notice it as a strutting coolness, an attitude and a lifestyle communicated via the casual virtuosity of Dan Block’s clarinet solo on the former and a tenor sax solo from Lance Bryant on the latter.

On more structurally complex compositions—like “Fanfare on Fairfax” and “Feet and Frames”— that baked-in chemistry becomes even more paramount as Farber’s compositional craftsmanship transcends a by-the-numbers feel, eschewing repeating choruses in favor of uninterrupted streams of continuously evolving musical ideas.  The serpentine “Fanfare,” a piece of smoky, hardboiled West Coast noir with cinematic flare, is particularly illustrative. Carl Maraghi’s Mulligan-esque runs on baritone saxophone combine with the warmth and roundness of Chirillo’s tone on electric guitar to form the head of the snake, while stands of woodwinds and muted trumpets form the muscly body, coiled and ready to strike—which, before too long, it does, propelled by the elegant aggression of a Godwin Louis alto saxophone solo.

Louis reappears on the album’s title track, where both his alto sax playing and the Farber composition itself, invite comparison to Benny Carter, the prolific multi-instrumentalist, who, like Clark Terry, is forever linked to several of the era’s leading bandleaders. And speaking of Terry, the groundbreaking soloist for both Ellington and Basie, there’s “Symphony for Dr. T,” a smiling locomotive of a tune powered by Brian Pareschi on flugelhorn.

Early Blue Evening is rife with nods to the big band gods. And not just bandleaders like Ellington and Basie or game-changing instrumentalists like Terry and Carter but also the indispensable composers and arrangers.

Friedwald, in his liners, identifies “Portrait of Joe Temperley,” an elegiac tribute to the baritone saxophonist who played in later iterations of Ellington’s band, as “particularly Strayhornian.” Farber’s own playing here is inspired in part by how Temperley used to play “Single Petal of a Rose,” the gorgeous, melodic Ellington ballad that was part of The Queen’s Suite, a work Strayhorn famously composed with Duke in 1958 for an audience of one: Queen Elizabeth II. The emotional coup de grâce here is that Farber plays this most inspired of tunes on the late Temperley’s actual baritone saxophone—even the most austere of royals would be moved.

Farber’s arrangement of Hefti’s “Theme from The Odd Couple” is his salute to the longtime Basie composer/arranger who wrote so many of the charts that came to define Basie’s signature sound. Farber, as Hefti did for so long, writes in a manner that amplifies the strengths of his personnel. Among that personnel are Birnbaum and Farber himself on alto saxophone; with inspired solos, these master improvisors elevate iconic motion picture theme music to bona fide jazz.

Whether it’s the poignant reverence of the Temperley tune or the jazz-pop sensibility of “Odd Couple,” Farber & his Orchestra demonstrate a willingness to cover nearly all the idiomatic ground available to a world class big band. Put simply, there isn’t a note—emotionally and otherwise— Farber and company cannot strike.

Take “The Holidaymakers,” a send-up to Ellington’s Afro-Caribbean catalogue and a true hip-shaker that’s every bit as vivacious as the tribute to Temperley is solemn. Or “Cork Grease and Valve Oil,” the musical equivalent of a knowing smirk, a happy-go-lucky tune concealing a secret weapon: a dialogue of good-natured bravado between Farber’s tenor saxophone and Bruce Harris’ muted trumpet.

Though Farber saves the most showstopping surprise for the very end, bringing out celebrated jazz vocalist Catherine Russell to join the band for his arrangement of the Parker and King standard, “How Am I to Know.” With its maximally supportive dynamics, the band lets Russell’s star shine—she breaks ever so briefly to allow Farber (tenor sax) and James Zollar (trumpet) share in her moonglow—lending credence to what might otherwise sound like hyperbole from Friedwald: “…this is some of the best big band jazz we’ve heard in a long time.”

Farber is thrilled to release this album with ArtistShare, one of the leading labels in the large ensemble space. ArtistShare has arguably produced some of the most notable releases within the genre over the past fifteen years including albums by Maria Schneider, Brain Lynch, Gil Evans, and others.