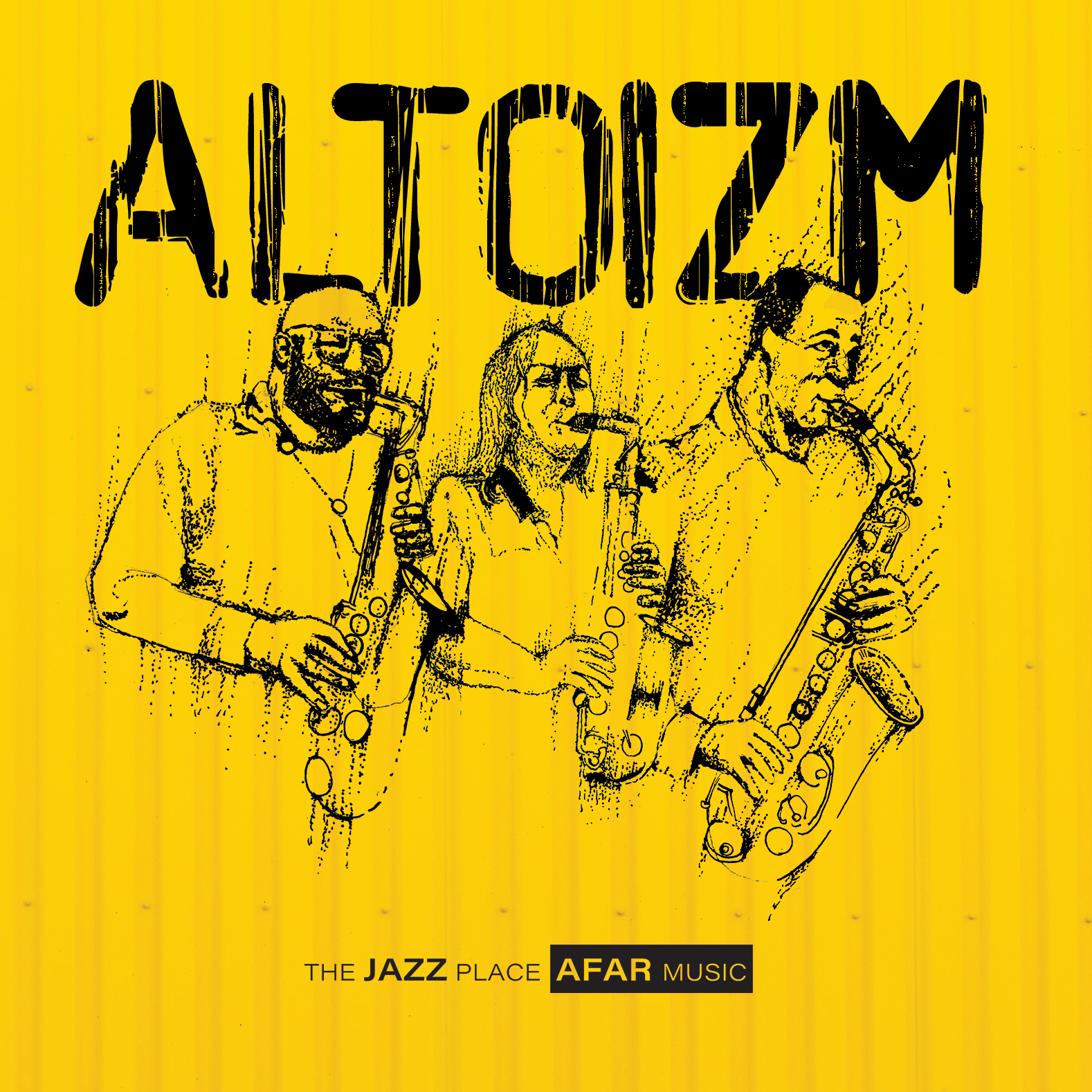 AFAR Music is proud to announce the July 16, 2021 release of Altoizm, the self-titled debut recording from a three-headed alto saxophone supergroup led by Greg Ward, Rajiv Halim, and Sharel Cassity.

Featuring a rocksteady yet explosive rhythm section of Richard D. Johnson (piano), Jeremiah Hunt (bass), and Michael Piolet (drums), Altoizm is seven tracks and 42 minutes of original jazz. Ward, Cassity, and Johnson have each written two tunes, and Halim adds “Bembe’s Kids,” a melodically complex tune that’s perhaps the first to simultaneously honor both the bembé rhythms native to sub-Saharan West Africa and the madcap animated comedy Bébé’s Kids, a symbolic nod, Halim says, to “the chaotic social, economic, and political environment in which Black American music has been— and continues to be—developed.”

Musically, it’s a bluesy, noirish tune that sees that chaos and raises it a mischievous grin, while getting the absolute most out of three saxophones playing both in unison and in harmony.

It takes great individual talent but also real chemistry as a unit to pull off the kinds of sophisticated arrangements presented here. Even though these three saxophonists are used to being featured soloists and, collectively, have released about a dozen albums as leaders, their chemistry with each other is palpable. Far from being able to discern any ego, what shines through most prominently is the collective desire to produce purposeful and meaningful compositions.

All three—Ward, Halim, and Cassity—are stalwart stewards of the Second City’s jazz scene. Ward, a prolific instrumentalist and composer, counts pioneering free jazz saxophonist Fred Anderson as a mentor and Chicago rapper Lupe Fiasco as a colleague. There are few compositional commissions for which he’s not qualified. He’s composed classical music and jazz, scores for ballet and film, and concerti for symphony orchestra and chamber ensembles, as well as tunes for his own bands, Fitted Shards and Phonic Juggernaut. His 2010 debut with the former, South Side Story, was named Recording of the Year by the Chicago Tribune, and he’s presently a member of the jazz studies faculty at Indiana University’s Jacobs School of Music.

Halim, like Ward, has collaborated regularly with the Jazz Institute of Chicago, and, like Ward, possesses a boundless musicality. As a young saxophonist, he found a mentor in iconic Chicago tenorman Von Freeman, frequently sitting in at Freeman’s long running jazz jam at the South Side’s New Apartment Lounge. And not far removed from his high school graduation, he played Lollapalooza as a member of the hip-hop-fueled sonic cauldron that was Kids These Days. From that association, he befriended Chance the Rapper, appearing on the latter’s 2017 Grammy-winner Coloring Book.

A similar thing happened when Halim found himself in the same recording studio as Cassity. A twelve-year member of the Dizzy Gillespie All Stars and a professor at three universities, Cassity has released four albums as a leader (most recently 2020’s Fearless), has played in bands led by Cyrus Chestnut, Nicholas Payton, and the late Jimmy Heath, and has shared stages with Christian McBride, Wynton Marsalis, Dee Dee Bridgwater, and too many other jazz immortals to properly note here. Cassity had met Ward while touring together a decade prior in New York, and had previously played with Halim at the weekly Von Freeman tribute led by Geof Bradfield at Andy’s Jazz Club. Each in the studio working on individual projects, Cassity and Halim got to talking—then soon got to jamming. Feeling instant chemistry, Cassity suggested “an alto summit.” Halim quickly agreed, but they needed one more. It had to be Ward.

Wise choice. Ward understood instinctively how to get the best out of these three altos, both individually and collectively. Case in point is his first composition here, “The Mighty Mayfly of Truth,” which explodes warmly and gradually like the break of a bluebird day, with brilliant three-part section playing that shines warm on your face and solos that melt it.

“I thought about each saxophonist and tried to imagine how our sounds would come together,” said Ward. “And then, ‘The Mighty Mayfly of Truth’ almost jumped out of me.”

Next, Cassity’s “Thoroughbred,” introduces an original melody of the highest pedigree over the chord changes to Benny Golson’s “Stablemates,” raising the stakes down the stretch with an eight-bar tag reminiscent of the late Jimmy Heath’s elegant codas.

Not only can she end a tune with grace and style, Cassity can also open an album with authority; allow “Cedar Groove” to testify. Composing atop the chord changes to Cedar Walton’s “Fantasy in D,” Cassity has constructed a theatrical yet muscly tribute to the late Jazz Messenger, with a couple of rejuvenating micro-cations to Latin America woven into the tune’s hard-swinging and eminently hummable main theme.

Alto summits bringing together three saxophonists of this caliber are rare. Factor in the quality of the rhythm section—see Johnson’s “Last Minute,” the album’s closer, for masterclasses from both Piolet and Hunt and Ward’s “John Cotton” for bluesy improvisational pianism at its breeziest from Johnson—and you can forget about it.

Cassity knew when she caught Halim in that studio that they couldn’t let the pitch go by. “This opportunity” she said, “has allowed us to work together in a way we never would have been able to otherwise.”