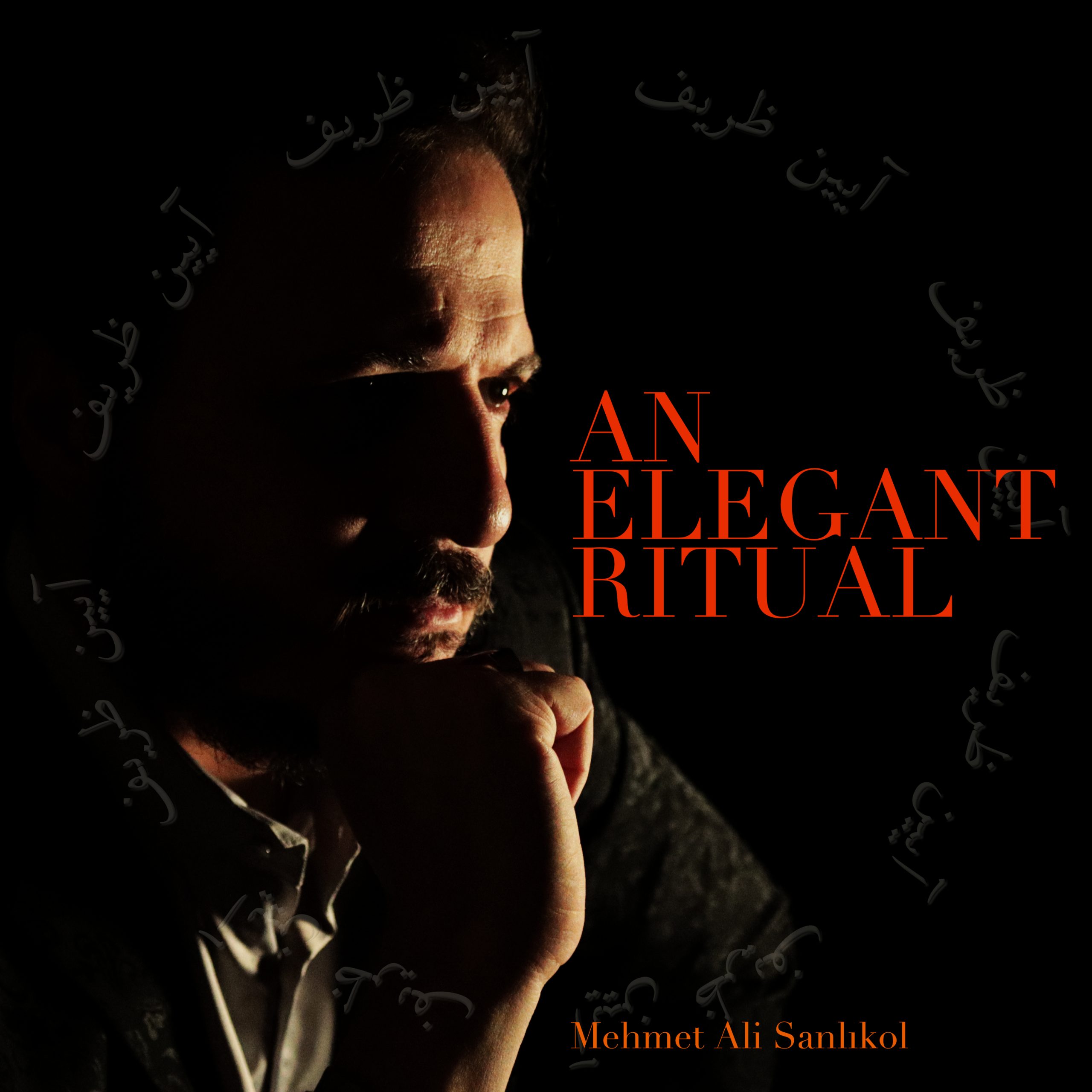 Celebrated pianist, composer and noted scholar Mehmet Ali Sanlıkol is thrilled to announce the release of his new full-length album An Elegant Ritual. To be released on July 16, 2021 via the DÜNYA label, this revelatory new recording deepens Sanlıkol’s singular approach to melding the sonorities of Turkish music with contemporary jazz language, striking a distinct balance between tradition and innovation. On his first ever trio recording, the prolific multi-instrumentalist realizes this expanded vision with James Heazlewood-Dale on acoustic bass and George Lernis on drums, gongs and bendir (a wooden-framed drum typical in the music of the Middle East).

Sanlıkol’s eagerly-awaited new release synergizes the concept of the classic piano trio with his own musical paradigm which draws from a diverse array of worldly and spiritual inspirations. The set transcends the typical piano trio format with the addition of Sanlıkol’s expressive vocalisations and captivating performance on the ney (a traditional end-blown flute that figures prominently in Middle Eastern music), as well as with Lernis’ use of Indonesian gongs and the bendir. An Elegant Ritual follows Sanlıkol’s critically-acclaimed 2020 release The Rise Up: Stories of Strife, Struggle and Inspiration which featured his dynamic jazz orchestra Whatsnext? and NEA Jazz Master Dave Liebman as soloist.

Though Sanlıkol has regularly performed in small group formats for nearly two decades, this is his first recorded trio venture. The hold up, he reveals, was in part due to a deep seated desire to innovate, and say something entirely new in the time-honed format. “Perhaps my obsession with wanting to say something new originates from having seen the busts of Beethoven, Mozart and Chopin on my mother’s piano since early childhood,” he muses, “I do realize that that model is problematic due to the way it defines newness and innovation in a Eurocentric way, which in turn expresses a type of homegrown exoticism.” Throughout his active and diverse career, in which he has acutely straddled the lines of jazz and a variety of Turkish musics, he has helped carry the notion of newness toward a more pluralistic and inclusive point where improvisation plays an important role. In the end, the urge to say something ‘new’ has always been present in his work and An Elegant Ritual is no exception.

While An Elegant Ritual surely pushes musical boundaries, Sanlıkol made a conscious effort to stay somewhat loyal to the jazz piano trio tradition in reverence to its rich history and craftsmanship. In this spirit, the entire album was recorded live devoid of overdubs or special effects. Furthermore, pieces such as “Invitation” – which is the only standard present – and “Lost Inside” invoke the piano trio aesthetic by keeping with the traditional jazz instrumentation, with no extra instruments added or Turkish/world music influences explicitly heard.

The bulk of An Elegant Ritual features varying degrees of Turkish and other musical influences, augmented by Sanlıkol’s emotive vocal stylings present on nearly all the tracks with the exception of the title track, the aforementioned “Invitation” and interludes. Whenever Turkish music elements are at play, Sanlıkol also makes a concerted effort to honor that tradition’s subteletlies of the makam (mode) and usul (rhythmic cycles) concepts.

Structurally, An Elegant Ritual is modeled after a Sufi whirling dervish ritual (Mevlevi ayin) with influences from John Coltrane’s hallmark A Love Supreme. The Mevlevi ayin typically features a central composition bracketed by an opening call and a preparatory piece in front, and two upbeat pieces at the end. Here, the central composition has four movements (like A Love Supreme) with strategically designed appearances of the gongs and ney. And also like A Love Supreme, Sanlıkol desired to imbue a sense of spirituality within the music, a quality that is prominently felt on the title track in particular.

An Elegant Ritual is set in motion with “The 7th Day”, which after a prelude (or an ‘opening call’), sets the stage with Sanlıkol’s emotive scat-singing and incandescent performance on the piano. This preparatory piece is followed by “Lost Inside”, which kicks off the four-movement album centerpiece. Leaning toward the traditional jazz trio aesthetic, “Lost Inside” showcases the composer’s tremendous improvisational acuity, and the marvelous interplay of the rhythm section. While the majority of this album features pieces that have short forms and are essentially vehicles toward improvisation (in line with the jazz trio tradition), “Arayış / In Search” and the following “An Elegant Ritual” are ambitious compositions which extend that aesthetic toward innovation.

“An Elegant Ritual” introduces listeners to ideas and timbres that are entirely new, and have never been heard before in this type of setting. “The opening duo of the bass and ney in unison was achieved by having the bass play the challenging natural harmonics at the very top of its range which perfectly complemented the microtonal nature of the ney. On the other hand, the use of gongs originated more than 20 years ago when I first heard Javanese Gamelan. After studying Javanese Gamelan for a number of years and eventually assembling our own set of gongs, I wrote the interlocking gong and usul pattern based on the cyclical structures of that tradition which serves as the foundation of the composition,” describes Sanlıkol. While it took over six months for Lernis and Sanlıkol to find, order and properly arrange the gongs in their set, the most stunning achievement of all is that Lernis learned to play the complex, interlocking gong and drums pattern in a very short period of time with amazing precision.

And while instruments like the ney can be found in jazz contexts regularly these days, it is Sanlıkol’s observation that a true synthesis of the jazz and the ethnic musical tradition is hard to come by. “After many years of performing jazz followed by an intense and a lengthy period of strictly traditional Turkish music performance, I found myself at a point where I started to ‘speak’ both of those musical languages on a number of instruments and as a singer,” he describes. As a result, Sanlıkol chose to comp himself on the piano while improvising on the ney simultaneously, as heard on “An Elegant Ritual”.

Sanlıkol’s vocals can be heard most notably in the prelude and in “Hasret”. The composer describes his vocal style as a blend of Turkish aesthetics and scat-singing acting as a bridge between two traditions. Doubling melodic and improvised lines, and independently countering Sanlıkol’s harmonic refrains and rhythmic movement from Lernis and Heazlewood–Dale, the fervency and resolve in the bandleader’s voice reminds one of the sound of Coltrane’s horn on A Love Supreme. The album concludes with the sole non-original piece “Invitation”, a masterful nod towards the classic jazz trio sounds of yesteryear. Sanlıkol remarks, that “the two upbeat pieces at the end (traditional in a dervish ritual) are echoed here by the postlude and “Invitation”, which is my invitation to you to join this Elegant Ritual.”

A masterwork of sonancy and cultural interchange, An Elegant Ritual is “an awakening”, New York Times Best Selling author Kabir Sehgal proclaims. “From the first notes, you know that you’re in for an adventure, not just one that spans East and West. But that of a cognitive leap towards what music can be.”