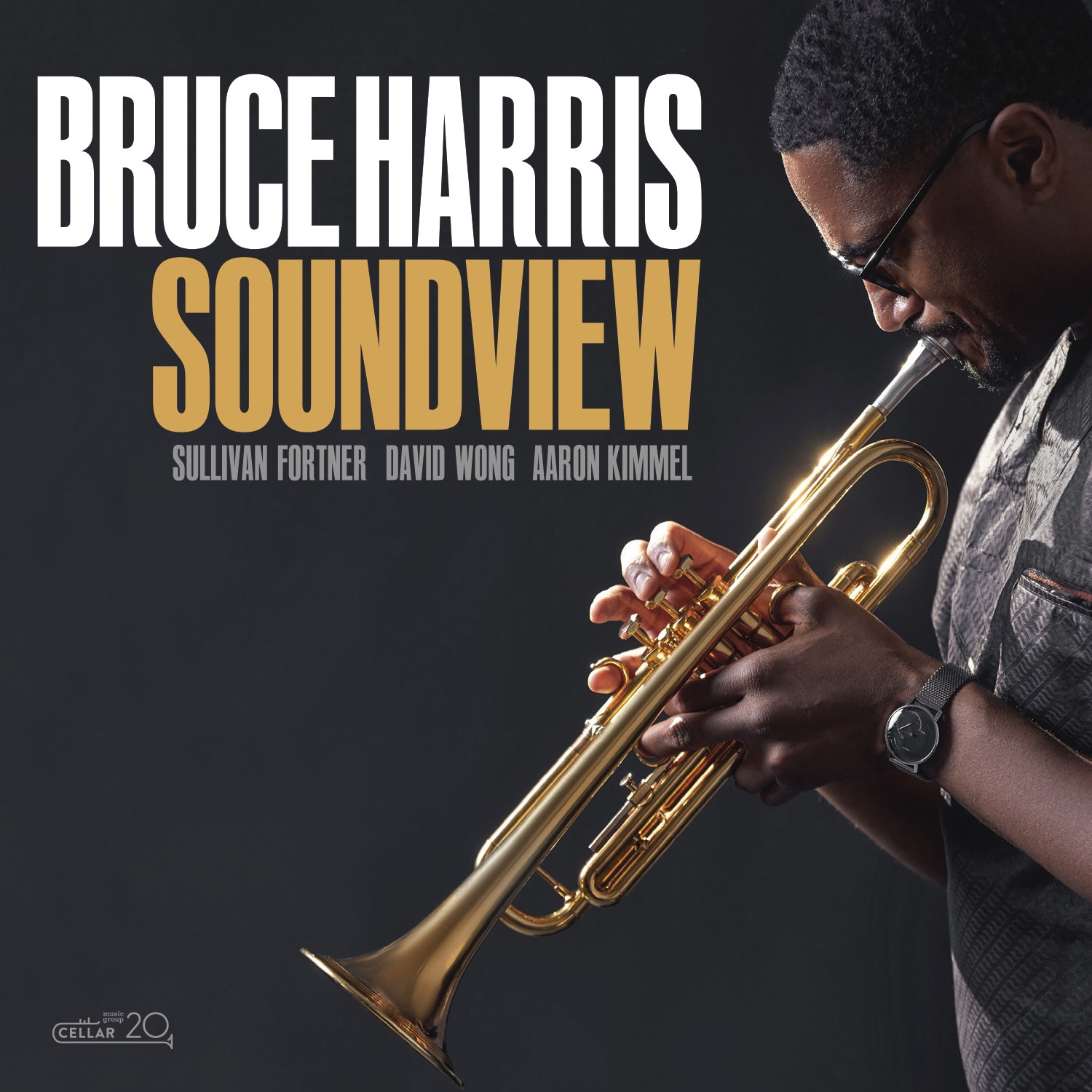 Cellar Music Group is thrilled to announce the release of Soundview, the latest studio album from trumpeter, composer and educator Bruce Harris and his A-list quartet of masterful musicians. Striking a personal note with Harris, as it speaks to his upbringing in the Bronx neighborhood of Soundview New York, this Jeremy Pelt-produced masterwork celebrates Harris’ ancestors and the architects of the Black American Songbook to which he is so fervently and passionately devoted. Joining Harris is Sullivan Fortner on piano, David Wong on bass, Aaron Kimmel on drums and rising star vocalist Samara Joy, who guests on two tracks. This release marks the first of several collaborative efforts between Cellar Music and Pelt; an initiative which is geared toward showcasing the voices of Black artists. Keeping in line with Soundview’s theme, a donation has been made on behalf of Bruce Harris to the Bronx Charter School of the Arts in conjunction with this release.

The bandleader remarks that “during the pandemic I looked further and got more into the history of Black people in America. It was a time to learn and reflect. In gratitude, I wanted to pay tribute to all of the African American creators of this music.” All but one of the nine tunes on Soundview were written by Black architects of this music, who all happened to live and thrive in Harris’ birthplace of NYC. A testament to the longevity and vivacity of the artform, Harris’ music harkens back to the spirit of his musical ancestors while remaining an innovative and captivating new work.

This iteration of the Bruce Harris Quartet sees its recording debut with Soundview, however, the deep personal connections within this outfit are made evident in the group’s stellar interplay. Harris first met fellow New Yorker David Wong in the late 1990s when the two players were in the same All City and All State jazz bands. From there, a fruitful collaboration took shape. Since, Wong has gone on to play with the likes of Roy Haynes and Jimmy Heath. Harris has worked extensively with drummer Aaron Kimmel for the past decade, who he dubs “one of the greats here in New York; a young master,” and one of his “top five” in the city. Soundview marks the first collaboration between Harris and pianist Sullivan Fortner whom Harris has long admired.

Harris reflects that his relationship with Soundview’s famed album producer Jeremy Pelt began many years ago when Harris was a college student. Pelt’s words of encouragement for Harris left an impact on him. “We’re all in the rat race here. There’s something for you – just get in,” he said. Over the years, Pelt has become a sort of big brother to Harris.

Upon producing this message-driven release, Pelt remarks that “…contrary to opinion, Jazz has always reflected the times. Sadly again, we are bearing witness to the racial injustice in the United States, wherein Black people’s lives are constantly at risk, particularly by those sworn to protect its citizens. As harrowing as this is, there seems to be a dialog in which Black voices are finally being heard. The Cellar Music Group recognizes that Jazz is not only a music native to America, but that the progenitors of this music are the very lives that are being threatened daily.” Pelt is pleased to bring this conversation to the fore with Harris’ release.

Soundview is full of several bright moments. As Harris began writing the title track, he visualized scenes of where he was from. “I almost feel like the chords tell the story of my upbringing; a little dark in the beginning, some conflict worked through in bridge, and a new height harmonically resolving in a beautiful major chord,” he says. It is no mistake that the rhythm of the piece is a mambo rhythm, which Harris dubbed ‘the underlying clave of the Bronx’. ”Although it was not a place filled with privilege and opportunity, Soundview was and is rich in artistic excellence and indomitable spirit.” The piece begins with an ostinato from Wong followed by some rhythmic vamping by the rhythmic section, stating the clave of the composition. This sets the stage for Harris to take it by storm with fiery, soulful melodic musings. The recording features masterful improvisations from Harris and Wong.

Another highlight, “Bird of Red and Gold”, features the gifted Samara Joy on vocals. A fellow Bronx native and former student of Harris’, Samara lends her rich dulcet tones to this composition written by jazz luminary and renowned educator Barry Harris. The bandleader notes that Barry Harris was instrumental in his own musical upbringing and that of pianist Sullivan Fortner’s, and Samara is a current student of his. The powerful musical connection between these players is informed by the fact that all of the players are subscribers to Barry Harris’s unique and powerful conceptions of jazz harmony.

“Saucer Eyes” is a composition by the late jazz luminary Randy Weston who Harris fondly remembers spending a short time with while on tour in Oman. The track has become a live performance staple for Harris. In the spirit of lineage, Harris is thrilled to now see younger generations of musicians performing this Weston piece more frequently. The melody is delivered here with a gleeful energy. Harris and Fortner soar over the changes in their solos conjuring Weston’s immense spirit.

With the release of Soundview, Bruce Harris has surely earned his reputation as one of the most important and emerging voices in jazz today. Soundview will be available everywhere on June 4, 2021.

More About The Artist:

Bronx-born trumpeter and composer Bruce Harris’ love for music began in his home where the sounds of his grandfather’s alto saxophone and New York’s storied musical traditions of bebop and hip-hop consumed him. Inspired by acclaimed director Spike Lee’s “Mo Better Blues,” Harris became enamored with the trumpet and kicked off a lifelong musical journey. Heavily influenced by Charlie Parker, Miles Davis, Clifford Brown and Dizzy Gillespie, Harris performed in the “Essentially Ellington” jazz band competition as a high school junior, earning the opportunity to play alongside Wynton Marsalis. Harris went on to earn a Bachelor’s Degree and Masters Degree in Jazz Performance at the Conservatory of Music at Purchase College, where he was mentored by trumpet virtuoso, Jon Faddis.

Bruce Harris’s professional career as a performer has been defined by his infectious joy, undeniable passion and youthful energy.  His chops were honed in many of New York’s premier music venues and jazz clubs such as Smalls, Smoke Jazz Club, Dizzy’s Club Coca-Cola, Ginny’s Supper Club, Minton’s, Rockwood Music Hall, among others. Harris has made appearances on CBS’s The Late Show with Stephen Colbert and NBC’s The Tonight Show with Jimmy Fallon. In addition, he has appeared alongside a long list of legendary performers, including Wynton Marsalis & the Jazz at Lincoln Center Orchestra, Dave Brubeck, Billy Taylor, The Count Basie Orchestra, Michael Feinstein, Barry Harris, Roy Hargrove, and Tony Bennett. In 2013, for Ebony Magazine, Wynton Marsalis highlighted Bruce as one of the five important young jazz musicians you should know.