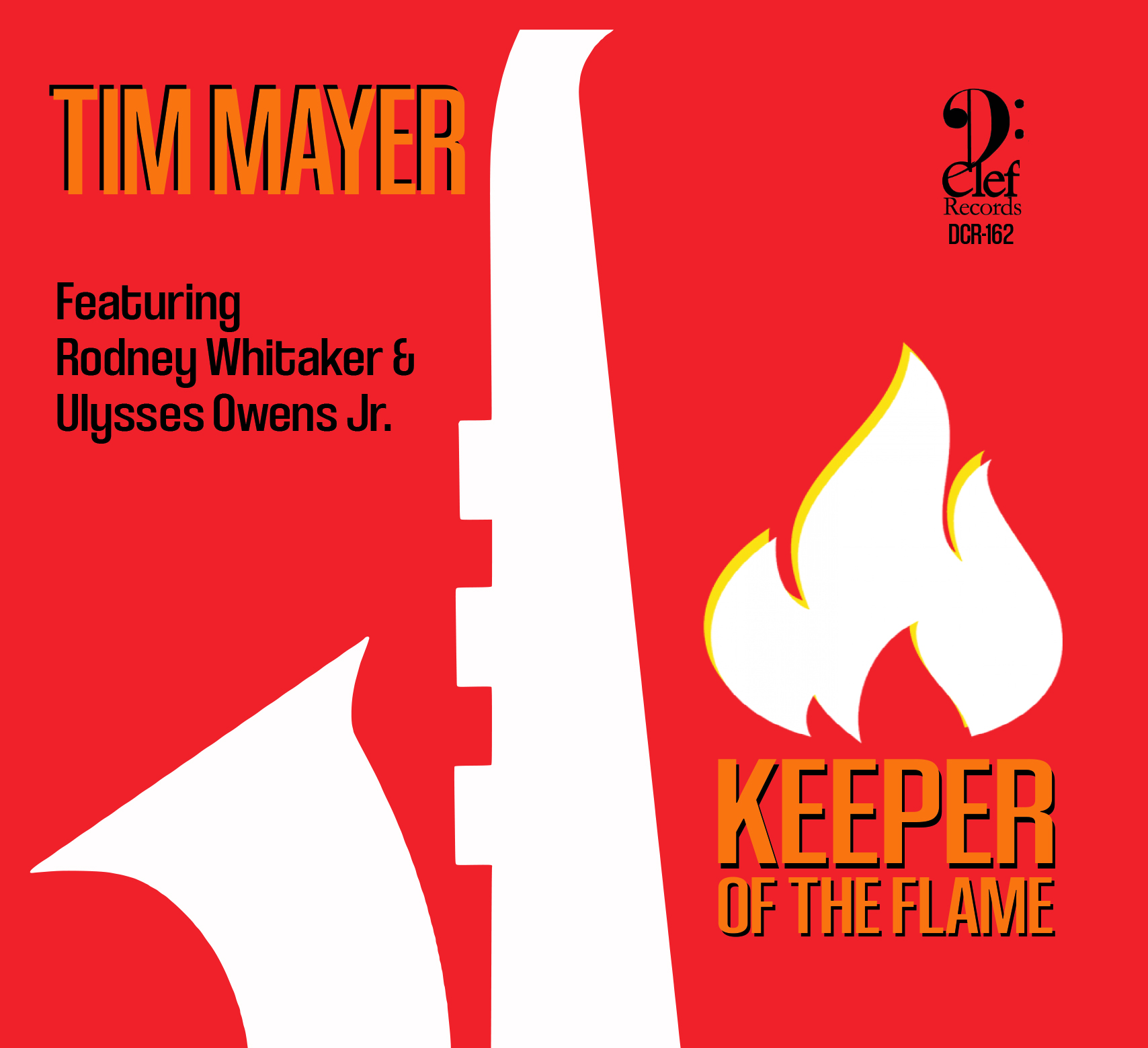 D-Clef Records is proud to present the June 4, 2021 release of  Keeper of the Flame, a new album from stalwart saxophonist and composer Tim Mayer and his octet, featuring bassist Rodney Whitaker, drummer Ulysses Owens, and Emmet Cohen as a guest pianist.

Jazz music has taken Mayer all over the world. Boston, Hawaii, the Canary Islands, Colombia, he’s played them all and many more, spreading the gospel of jazz at each port of call. At present, Mayer’s based in Xalapa, Mexico, having just completed his Master’s degree at Universidad Veracruzana; that hasn’t stopped him from recording Keeper of the Flame, his first album as a leader since 2011’s star-studded and critically acclaimed Resilience.

A decade later, Keeper of the Flame reveals that the same fire that’s taken Mayer around the globe to play jazz is still burning plenty hot – and he wants to make sure he passes on his enduring passion for the music to others; that’s what Keeping the Flame is all about. “Jazz is what we as Americans have contributed to the world,” Mayer says. “The music is also a great teacher; it can be a mirror that reflects back who we really are.”

On Keeper of the Flame, Mayer’s octet brings both fiery tenacity and thoughtful erudition. The rhythm section sets the tone for striking this sophisticated balance, with Owens and Whitaker joined by Miki Hayama on piano. Mayer can be heard on both tenor and soprano saxophones, as well as on alto flute (on “Elusive”); joining him in the woodwind section are Adam Rongo (alto sax) and Tony Lustig (baritone sax). And the small but mighty brass section comprises Anthony Stanco (trumpet) and longtime Mayer collaborator Michael Dease (trombone), who in addition to playing has contributed a composition to the session, the intimate and lushly textured “Elusive.”

The always ascending Cohen guests on Mayer’s “Get Organized,” a stylish, contemporary noirish number inspired directly by the Occupy Wall Street protests of the Great Recession but perfectly suited to contemporary foreboding.

“Whether it’s an old standard or a brand new composition,” Mayer says, “we face the same challenge: to render the moment in music.”

Keeper of the Flame rises to that challenge with a balanced set of originals, standards, and tributes to some of Mayer’s heroes, past generations’ keepers of the flame. Take the opener, “Big P,” a tune written by saxophonist Jimmy Heath for his bass-playing older brother Percy. Whitaker’s playing anchors the tune and, as both driving and contemplative, honors the eldest Heath brother, but Mayer actually presents this one as a tribute to Jimmy, whom Mayer came to know and befriend before he died in early 2020. And just two tracks later, Mayer honors Cedar Walton’s finely crafted songwriting with a take on the late Jazz Messengers’ “Hand in Glove,” a showcase for the rhythm section that naturally allows the pianist, Hayama, ample time out front. Then there’s the closer, a joyous, bursting rendition of McCoy Tyner’s anthemic “Passion Dance,” with Mayer waking up the echoes of Joe Henderson with his solo and the ensemble leaving nothing in reserve for Tyner’s signature tune. The octet’s take on Coltrane’s “Naima” is another story. Mayer as a saxophonist considers himself among the keepers of Coltrane’s flame, but this one transcends even that most noble goal here. “Every recording session,” Mayer said, “has one tune that captures the essence of the moment, that embodies the love, music, and respect among the musicians.” For Mayer, “Naima,” is this record’s version of that tune; it’s an exciting new arrangement that doesn’t forsake the soul of the original.

While Mayer and co. are innovators, they’re rooted in history, too, and it shows on their treatment of a couple of standards, “Bye Bye Blackbird” and “Blame it on My Youth.” The former features Mayer, Whitaker, and Owens as an intimate trio, with Mayer taking up the soprano sax, while the latter strips things down even further—it’s Mayer speaking his smoky ballad voice on tenor accompanied only by Whitaker this time. It’s about as up close and personal as Mayer gets here, with the possible exception of his other original piece, “Blues by Four,” which Mayer calls a tribute to “the bond of love and friendship I was fortunate enough to share with two enlightened beings”—his two pet pugs. Dog owners are sure to find emotional resonance here; the pet-free crowd, meanwhile, is sure to enjoy a no-nonsense blues that swings free and easy while showing off the power of a large ensemble combined with the fluidity of a smaller group.

With Keeper of the Flame, Mayer shows more than love for the legends he honors here; he communicates a sense of responsibility to them, one that exists between all musicians and must continually be nurtured, especially, as Mayer notes, in a year where so many greats have passed. “While this causes great sadness,” Mayer says, “it also strengthens my resolve to do my best to keep the flame.”