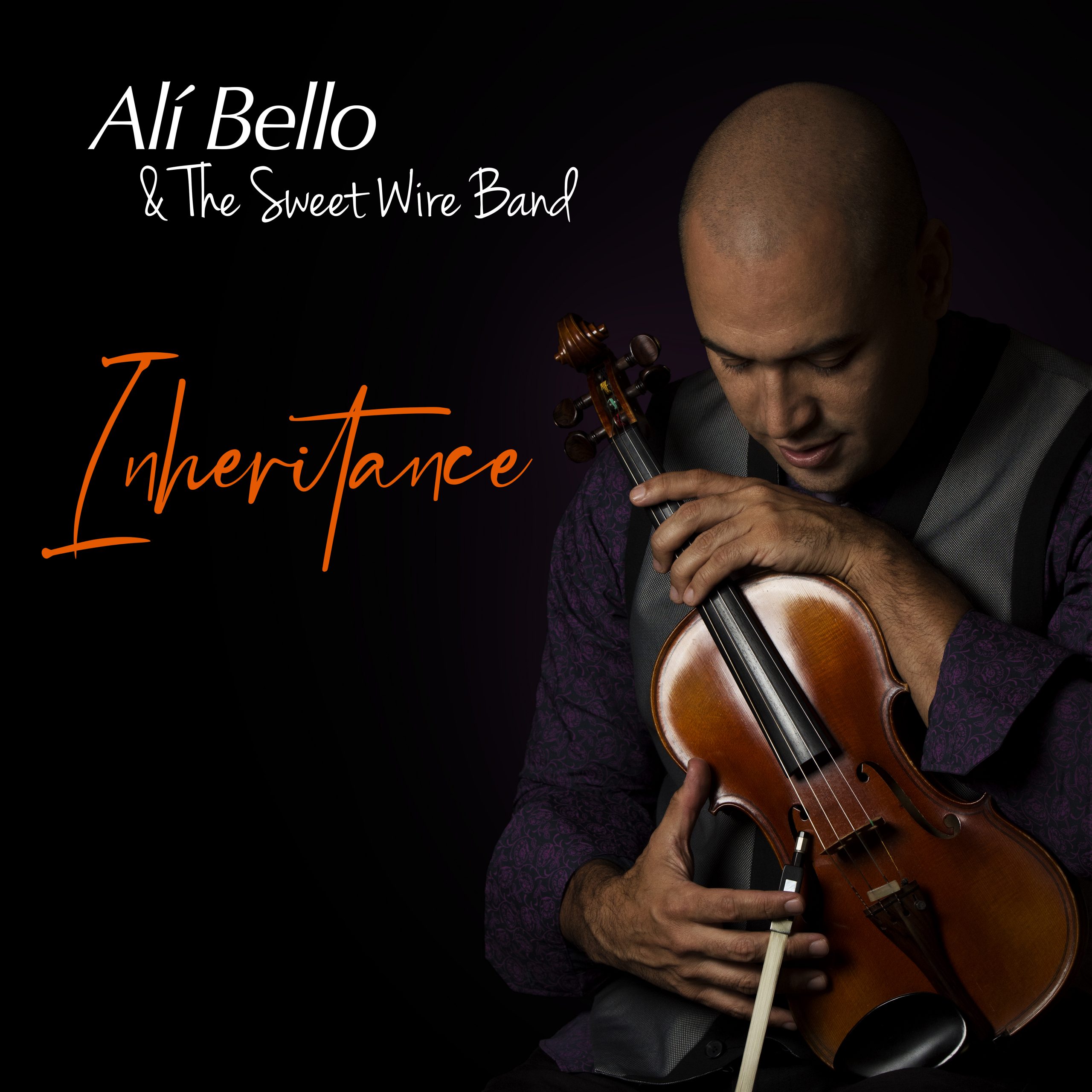 A veteran of the New York music scene for over two decades, Alí Bello has become known as a musician of incredible versatility. A fixture in the emblematic bands of Johnny Pacheco and Paquito D’Rivera, Bello is also a highly sought-after sideman for artists such as Orquesta Broadway, La Típica 73, Raul Jaurena and Pedro Cortés. He can also be found on occasional stints with mainstream superstars such as Beyoncé, The Roots and Jay-Z. His Sweet Wire Band, made up of pianist Gabriel Chakarji, bassist Gabriel Vivas, drummer Ismael Baiz and percussionist Manuel Márquez have become New York City mainstays, known for their unique fusion of contemporary jazz and Afro-Venezuelan/Caribbean musical styles. Their debut release Connection Caracas – New York (Zoho Music), was released in 2013 to worldwide critical acclaim, having placed on several year-end best-of lists. Inheritance is the long-awaited follow up, and uncovers new shades of maturity and growth. Alí shares: “Inheritance is a recapitulation. A way to move forward through the lessons learned. It’s the result of conveying all the parts that make my music and create new original ideas rooted in the culture, traditions, and experiences that make me and my music as a whole”.

On Inheritance, Bello captures the essence of the music from his native Venezuela and filters it through the lens of an artist that has been deeply exposed to a broad diversity of musical styles in the United States. In his liner notes, producer Kabir Sehgal says “Inheritance is a result of  long time growth and an evolution of different styles and genres that constitute Alí’s personal musical heritage from his homeland and his career experiences.” Indeed, Bello has a profound understanding of Venezuelan musical traditions, and has equally acquired invaluable experience in some of the most iconic Salsa and Latin jazz ensembles of all time. This recording integrates those two sides of Bello’s musical artistry as well as his aptitude for production.

The music featured on Inheritance draws heavily on Venezuelan traditions, and Bello’s core group of sidemen are all versatile Venezuelan expats who are well versed in all these styles. Afro-Venezuelan rhythms from the North Coast serve as the foundation for tunes like “Kaleidoscopic Sunset” and “For all Saints”, displaying drummer Baíz’s adaptations of these rhythms in harmonious unity with percussionist Márquez who plays an array of traditional Venezuelan drums such as the Fulía, the Paila and the Cumaco, among others.

Regina Carter lends her unmistakable sound to “Song To Marina”, a lush bolero track in which both violinists blend in concert, harkening back to the splendid singer duets known in the genre. In “Bello’s Blues” the close intervals of violin and soprano saxophone in the melody recall the idiosyncratic themes of Thelonious Monk. Jaleel Shaw plays a harmonically ingenious solo while the rhythm section burns on a brisk San Millan rhythm here, while Jeff Lederer shines on “Jojo”. On the Venezuelan joropo “Cepa”, Bello enlists the talents of Jorge Glem on the Venezuelan cuatro – a central instrument of this music.

The orchestration and arrangements featured throughout Inheritance reveal a new perspective on the rich folkloric musical traditions Bello draws from. The violin is an uncommon instrument in this music, yet Bello’s creativity and command places it right at home. The final three notes of the bright closer “Ousia” represent an apex of the jubilant journey of Inheritance. Indeed, Alí Bello’s latest effort is a joyous listen from beginning to end, though the naturally cheerful makeup of the music never sacrifices depth or content –  and in that balance lies Alí Bello’s great artistry.

MORE ABOUT ALI BELLO
Venezuelan born Alí Bello has become one of the most dazzling and sought after violinists, distinguishing himself for his versatility among different music styles in addition to his well-found classical training and multidimensional improvisational skills. Since his surge from El Sistema, the musical education program of his country, and after building upon years of experience in New York, he has become a Latin jazz music figure to be reckoned with.

During his career, Alí has collaborated and performed with such figures as Johnny Pacheco, José Fajardo, and Paquito D’Rivera.  He has also recorded with bands of great tradition such as Orquesta Broadway and Africando as well as modern fusion bands like Alfredo Naranjo y El Guajeo, La Clave Secreta, and Los Jóvenes del Barrio.

It is much beyond the amazing Afro Latin rhythms that Alí’s strings reach. He has become a sultry sound in tango, regularly performing with Grammy winner bandoneonist Raul Jaurena, and a regular collaborator on scores with flamenco guitarist Pedro Cortés. His repertoire expands even further to include gypsy jazz and American folk music, as a member of the touring quintet Doc Severinsen & El Ritmo De La Vida. He has also infused the violin into the popular rhythms of R&B, performing live with The Roots, Beyoncé, and Jay-Z. Alí can be heard arranging and collaborating dance beats with Grammy winner producer Louie Vega and artists Anané and Luisito Quintero, as well as recording with  award winning  groups Aventura and Don Omar. His violin has backed up amazing singers of the stature of Mercedes Sosa, Susana Baca, Gilberto Santa Rosa, Alejandro Fernández, and Cheo Feliciano among others.

From international performances to innovative recording sessions, from tropical Afro-Caribbean beats to swing and jazz, from arrangements in salsa to collaborations in Middle Eastern music, and from güajiro folkloric phrases to electric funk grooves, Alí Bello has proven himself as a musician with an exceptionally skillful repertoire and much more to come.