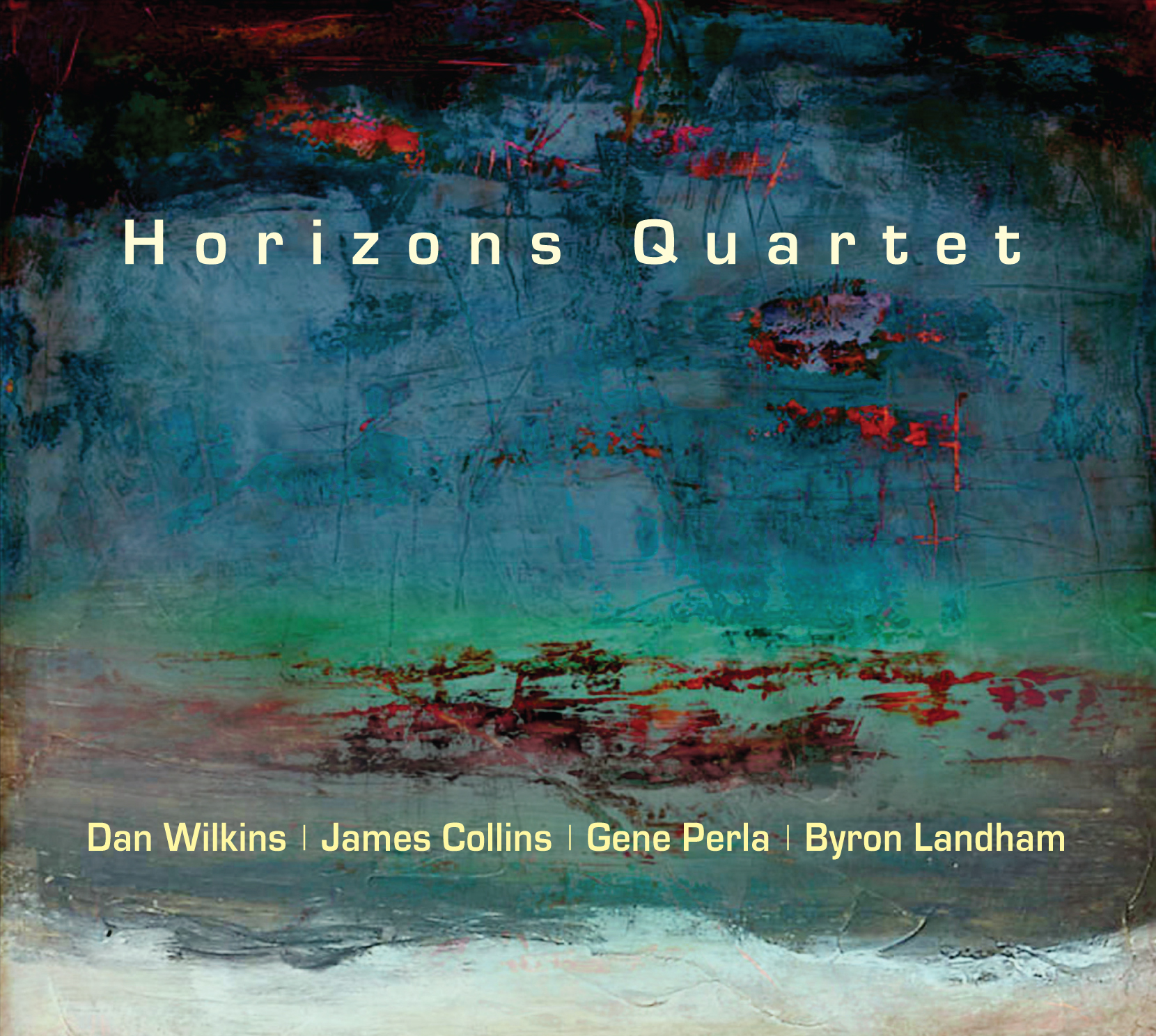 Producers Dan Wilkins, James Collins, and Jeff Hiatt, along with Gene Perla and PM Records, are proud to announce the self-titled debut release from Horizons Quartet, coming June 25, 2021. The album will be celebrated on Sunday, June 27th, at the Deer Head Inn in Delaware Water Gap, Pa.

Co-founded by Wilkins and Collins, the quartet’s youngest members, and anchored by a pair of their jazz heroes, drummer Byron Landham and bassist Gene Perla, Horizons Quartet is the consummate endorsement of multigenerational collaboration.

Each of the album’s eight original tunes has been composed by Wilkins, a Manhattan School of Music-trained saxophonist and composer from Pennsylvania’s jazz-rich Lehigh Valley. Though not yet 30, Wilkins has toured and recorded extensively with his father, the pianist Skip Wilkins, a longtime professor of music at Easton’s (Pa.) Lafayette College and part of the legendary cast of regulars to count the Deer Head Inn, in nearby Delaware Water Gap, as their home hit.

It was at that iconic venue as an adolescent that the younger Wilkins became inspired not just to become a jazz instrumentalist, but a composer, too, citing a 2007 performance and masterclass given by Dave Liebman and pianist/saxophonist Marc Copland at the Deer Head that “opened [my] mind to the rich world of harmony and composition.”

In the years since, Wilkins has regularly toured central Europe with his father—the latter plays the region so regularly that he maintains a residence in Prague—and the two have recorded three albums together, Father and Son (2012), Someday (2019) and Czech Wishes (2019).

Now, on Horizons Quartet, Wilkins proves exceedingly prepared to lead his own recording date—though it never hurts having a supporting cast like this. Collins, heard here playing acoustic grand piano and—on “The Blade’s Proposition” and “Gaia’s Blessing”— Fender Rhodes, has been gigging with Wilkins in and around Philadelphia since 2015. When he and Wilkins decided to put a quartet together, they knew they wanted to round out the rhythm section with the caliber of musicians that had inspired them to start playing jazz in the first place. Collins had been inspired by celebrated Philly-based drummer Byron Landham even before studying at Temple University, where Landham’s on faculty. The young Collins used to sit at Ortlieb’s, the old Philadelphia jazz club that was part breeding ground, part crucible for generations of Philly musicians, and “soak up the music from the masters, taking particular cues from Landham’s musicianship.”

Landham’s exported that musicianship throughout the jazz world, touring and recording with, among so many others, celebrated chanteuse Betty Carter, the stately tenorman Houston Person, and, perhaps most prominently, and frequently, with Hammond organist and fellow Philly native Joey DeFrancesco, even producing DeFrancesco’s Grammy-nominated tribute to Michael Jackson, Never Can Say Goodbye (2010).

But the biggest coup might’ve been adding venerable bassist Gene Perla, another Deer Head alum, who, in addition to playing with Sarah Vaughan, Jimmy Cobb and Miles Davis, played alongside Dave Liebman on Elvin Jones’ immortal Live at the Lighthouse (1973). On that gig, Liebman told him he was looking for the right label to release his then-new live album, Open Sky (1973). So Perla started a record label, PM Records, and Open Sky was its inaugural release. Today, it’s the very same label, Perla’s PM Records, that’s released this debut. It’s a veritable miracle—even at 81, Perla continues to bring worthy new jazz releases to life.

But it’s not just his business acumen that remains formidable. Perla’s chops are as strong as ever— propulsive yet steadying on “Spiraling,” the heraldic opening statement embodying shades of Trane’s takes on “Afro Blue,” and classically elegant and sensitive—like Paul Chambers on “Blue in Green” or “Naima”— on two beautiful, haunting ballads: the gut-wrenchingly forlorn “Billows” and the coolly noirish “Marionettes.” Undergirding the entire operation is the unmistakable chemistry between Perla and Landham, who play as though they’ve been battery mates for years even though this is their first recording together.

Not to be discounted here is Wilkins’ multi-sensory approach to composition, the product of a life-long interest in the intersection and interaction of music and visual artistry.

“Creating music, at its best, has always been a visually inspired, viscerally cinematic experience for me,” says Wilkins, who’s been doubly inspired by a recent foray into oil painting. “The interplay of harmony and melody paint a picture together, which, when animated and balanced by a stable core of rhythm, set the stage for a story to unfold.”

Accordingly, whether on tenor saxophone, as on “Marionettes,” “Gaia’s Blessing,” and “Kindling of the Phoenix,” or soprano, as on the album’s balance, Wilkins plays with narrative in mind. A tune like “The Blade’s Proposition” is a perfect example. Wilkins’ soprano carries a soaring, aerial quality that’s almost balletic. It blends perfectly with the ethereal colors issuing from Collins’ Rhodes electric that provides some insight into what the music of the stars might sound like.

Interest in the celestial similarly provides the launch point for the contemplative “Gaia’s Blessing,” the lone pairing of Wilkins’ tenor and Collins Rhodes, and the pulsing “Benediction of the Moon,” a cinematic piece with one of the album’s most memorable musical themes.

And for those who prefer not to deal with inference or implication, there’s “Get the Point,” where Wilkins’ explosion on soprano, following a solo intro from Landham, is an affirmative and explicit expression of raw saxophonic power. Don’t sleep, either, on Collins and Landham; each solo with purposeful aggression here. Only one thing remains to be said after this one: point taken.

Over eight tracks, this multigenerational quartet delivers an ideal straight-head jazz album in this sense: it draws from the past but it doesn’t overstay its welcome there. After all, this quartet has another destination in mind: that place off in the distance where the earth seems to meet the sky.