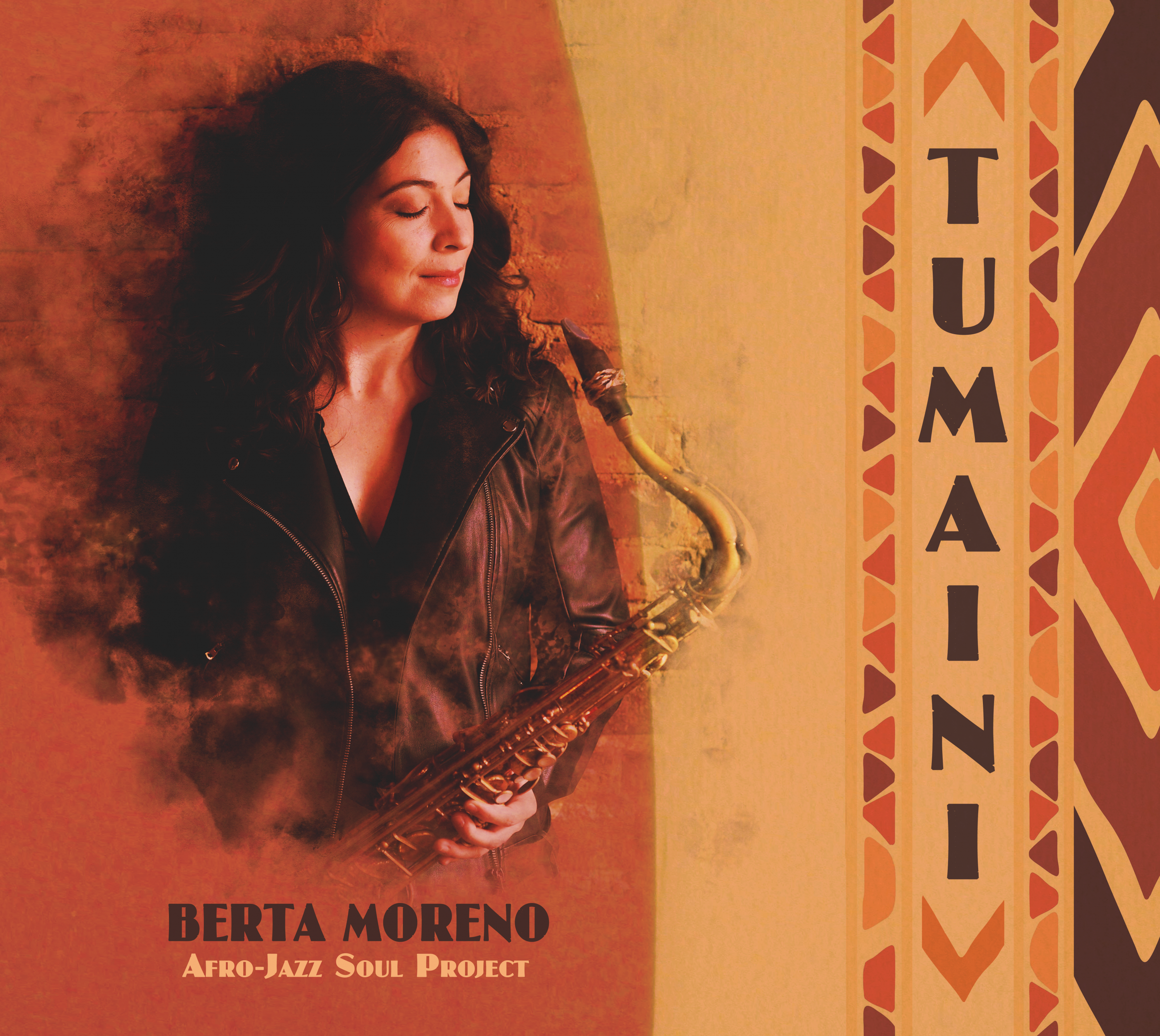 Saxophonist Berta Moreno Presents Tumaini,
A New Album with her Afro-Jazz Soul Project due out April 30, 2021 via Tiger Turn

Tiger Turn is delighted to announce the release of Tumaini, a new album by Madrid-born, New York-based saxophonist and composer Berta Moreno. To be released on all digital platforms on April 30, 2021, Tumaini is an uplifting and joyous musical journey that takes listeners on a vibrant tour of Kenya. Informed by the bandleader’s life changing experience volunteering in the Kawangware region several years ago, this heart-led new release seamlessly intertwines elements of soul, jazz and traditional African styles.

Joining Moreno is a multicultural outfit she calls the Afro-Jazz Soul Project made up of a versatile rhythm section featuring bassist Maksim Perepelica from Latvia and Raphaël Pannier from France. This rock-solid duo hits the many rhythmic guideposts of the pieces with ease and precision while the enigmatic Argentinian percussionist Franco Pinna provides an expansive sonority to the project. The pianist and keyboardist Manuel Valera from Cuba proves to be an inspired choice as he infuses the material with lush harmony and creative improvisations. Vocalist Alana Sinkëy from Guinea-Bissau shines as the emotive core of the group, delivering beautiful renditions of the lyrical material while displaying a rich variety of surprising timbres.

Tumaini, which is Moreno’s sophomore album,  takes inspiration from a life-changing experience Moreno had in Kenya several years back when she visited and worked with the children of the Kawangware neighborhood – one of the most economically challenged locales in the country – through the Little Ray of Hope School. The eight original compositions on Tumaini (“Hope” in Swahili”), are directly inspired by this resilient community and particularly the children, whose positive outlook and joyous attitude deeply moved Moreno. The resulting work is a powerful and profound narrative that takes listeners on a journey through Africa’s Savannah landscapes and sunsets to the heart of Kawangware. Much of the music maintains an uplifting tone, deriving its momentum from the use of rhythmic ideas that can be found in the music of East Africa and juxtaposing it over contemporary jazz concepts of harmony and melody.

In the liner notes, author and producer Kabir Sehgal notes: “Berta Moreno has created a musical gem, inspired by real-life experiences. She spent life-changing weeks in Kenya, where she learned about new traditions, cultures, and perspectives. It’s there when she decided to create an album that fused her artistic vocabulary with that from this part of Africa. These 8 original compositions are beautifully conceived, lushly rendered, and exquisitely performed. Brava, Maestra!”

Tunes like “Karibu”, and “Mandhari” (I and II) maintain a modern aesthetic full of modular rhythmic structures that evolve through the compositions and often surprise with the astute ways in which they develop. The band also showcases its aptitude at generating rhythmic momentum on “Afrika” with an infectious groove that wouldn’t be out of place in a Fela Kuti album, while the bright “Dance” maintains an effervescent Latin jazz style.

The introspective “Hope” is the centerpiece of the album expressing the deep personal changes the composer went through during and after her trip. Bringing attention to the stark contrast of the busy modern life in New York City, where it can be challenging to establish a true and honest human connection, with Kawangware where Moreno found a renewed sense of hope in people and human values. To reflect those dramatic changes, the composition starts with a sparse and mournful tone that slowly develops into lighter and more open harmonies, to outline this journey and transformation.

Throughout the album Moreno plays a dynamic role, often switching between improvising over the forms, doubling written parts, playing harmony parts to other instrumentalists, and playing backgrounds, showcasing her ability to think of the saxophone in a broader function than just a soloist. Compositionally, the many themes and moods of the album compliment each other while providing enough variety for the listener to find themselves in constant discovery.

Berta Moreno is a seasoned bandleader who has brought her bands to some of the most notable festivals and stages across Europe and the United States, such as the North Sea Jazz Festival. A regular in New York City, prior to the COVID-19 lockdown Moreno was a ubiquitous presence at many of the New York City clubs. Her first album Little Steps was received with critical acclaim by American and European press. It was featured in Downbeat Magazine, won a Global Music Awards Gold Medal for Best Jazz Album of 2018, as received a nomination for Best Jazz Album by The 16th Independent Music Awards (US), and The MIN Music Awards (Spain).

Tumaini is a worthy follow up and a true labor of love by this dedicated artist. A beautiful tribute to a region and its people. Berta Moreno has drawn profound meaning from her unique experience and poured it all into this highly personal work, representing a new highlight of her already bright career.

All songs written and composed by Berta Moreno