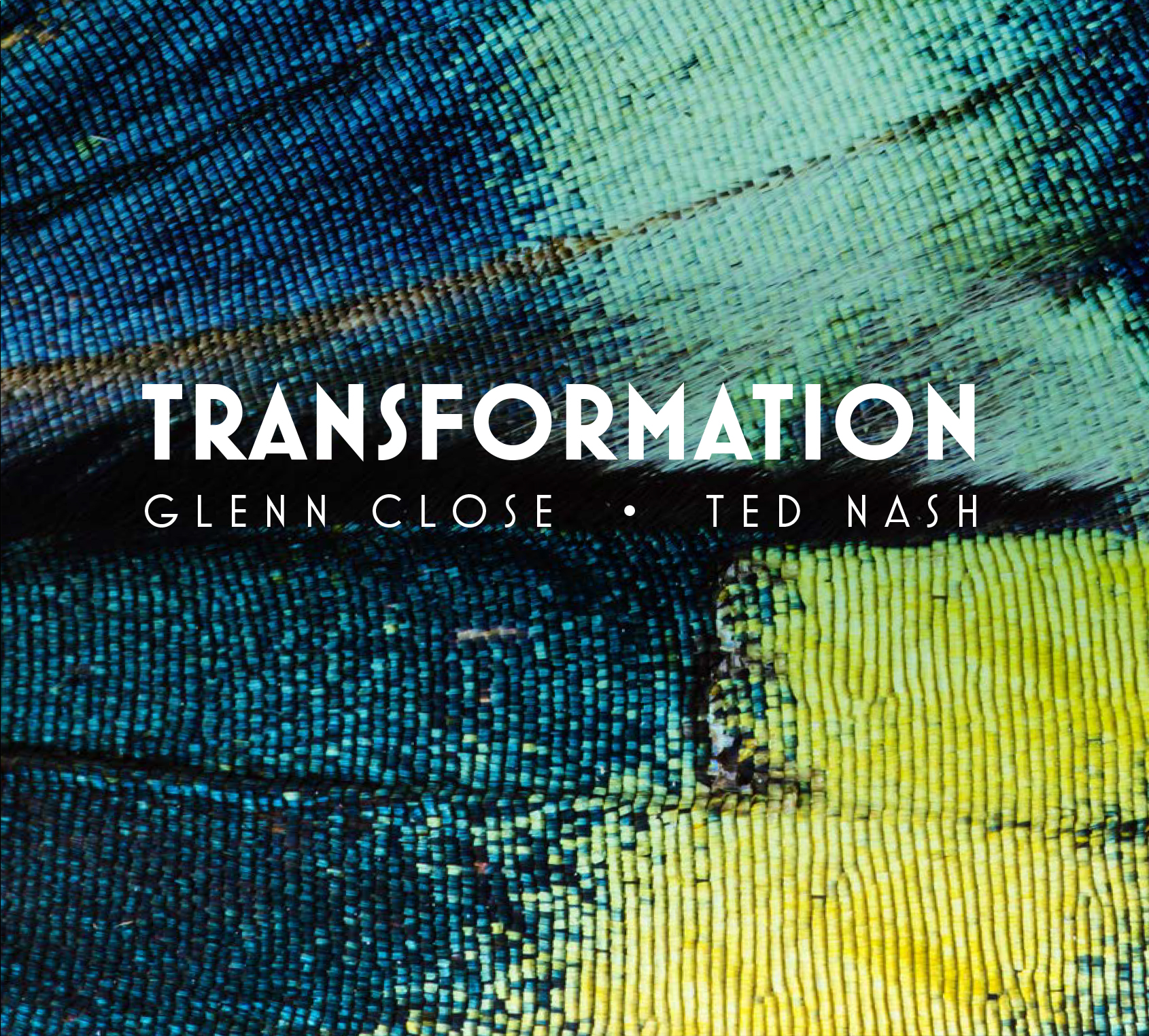 Tiger Turn is proud to announce the release of Transformation: Personal Stories of Change, Acceptance, and Evolution, a landmark recording of reedist Ted Nash and actress Glenn Close’s star-studded, multidisciplinary masterwork. Featuring Wayne Brady, Amy Irving, Matthew Stevenson, Eli Nash,  and the Jazz at Lincoln Center Orchestra (JLCO) with Wynton Marsalis. This groundbreaking new release will be available as a CD and digitally on all platforms on May 7, 2021.

Nash and Close know a thing or two about transforming the stuff of life into art. Close, immortalized by all-consuming, Oscar-nominated roles in Fatal Attraction and Dangerous Liaisons, is just as much a cultural touchstone for children of the ’90s for playing the delightfully sinister Cruella de Vil of 101 Dalmatians. Nash, long a JLCO woodwinder, has been no less brilliant as a total immersionist, earning a reputation as a prolific composer for taking compelling subject matter and transforming it into arresting musical narratives. His last two JLCO-commissioned suites for big band—Portrait in Seven Shades (2010) and Presidential Suite (2016)—met with sterling results. Among the luminaries lending their voices to that latter, Grammy-winning project was Glenn Close.

With Transformation, Close has returned for another collaboration with Nash, this time taking on a co-leading role, curating the literary source material for accompanying spoken word performances and voicing some of it herself. The chosen pieces explore the many facets of transformation in the tangible and intangible sense. “Transformation is the highest expression of change. Transformation dictates a dramatic alteration of form or character — sometimes both. The highest compliment one can give a piece of music, or writing, is that it has been transformative for the one who experiences it,” comments Nash.

From the start, Close’s literary selections prove to be compatible partners for Nash’s compositions. Actor and comedian Wayne Brady introduces “Creation, Part I” by reciting the opening lines to English poet Ted Hughes’ Tales from Ovid. Brady’s voice is so authoritative, it’s as though he’s relating Genesis as a first-hand account. Close, no less divinely commanding herself, joins Brady in alternating verses, while the orchestra colors the readings with expressionism steered by pianist Dan Nimmer and bassist Carlos Henriquez and punctuated by short bursts from Sherman Irby on alto saxophone and Wynton Marsalis on trumpet.

“Creation, Part II” moves beyond meditations on man’s creation to his evolutionary journey, the beginnings of which are interpreted here as endearingly unsteady. Musically, this dynamic is communicated with clarity and levity, as drummer Obed Calvaire’s brushes serve as a foil for Paul Nedzela’s bass clarinet and Henriquez’s bass, which play the tune’s playfully mischievous opening theme in unison. The entrance of Chris Chrenshaw’s trombone announces a transformation is underway—from gawky and lovable to industrious and self-assured. By the time Nedzela enters with a baritone saxophone solo, man knows it’s the man. When, to close, there’s a restatement of the opening theme, the notes are the same but the music projects a more aggressive attitude; Calvaire’s ditched the brushes for sticks.

The next two tracks, “Dear Dad/Letter” and “Dear Dad/Response” make for an emotionally affecting sequence. First, Nash’s son Eli, backed by the orchestra, reads the letter he wrote several years ago, when he first came out to his father as a transgender man. “I am not changing me,” Eli says, “just my physiology, just how people see me.” Nash’s response, with an opening vamp reminiscent of Herbie Hancock’s “Maiden Voyage,” is rife with pride and unconditional love. But words do not adequately capture Nash’s depth of feeling; that’s the music’s job.

Languid and hypnotic piano from Nimmer introduces Nash’s interpretation of poet Conrad Aiken’s Preludes for Memnon. Close’s voice is flanked by Nimmer’s piano and Irby’s alto flute as she reads an excerpt about the timeless and inevitable cycle of destruction and generation of natural life. Irby and trumpeter Ryan Kisor lead woodwind and trumpet sections that recreate the imagery of the reader’s mind’s eye, while quartet work from Nimmer, Enriquez, Calvaire and Kisor leads the tune beyond the text’s blast radius.

Next is “One Among Many,” a composition that accompanies the story of formerly imprisoned political radical Judith Clarke. Calvaire’s locomotive-sounding brushes and the on-the-move quality of Henriquez’s bass ostinato, followed by low woodwinds and Nimmer’s balletic piano, conjure the aural symphony of the subway system and frame Clarke’s words of gratitude—spoken by actress Amy Irving— for the mundane freedoms taken for granted until they’re taken away. Still, her crime and its fallout continue to haunt her; she yearns to be fully transformed. The orchestration contemplates being physically free yet still seeking psychological and emotional liberty, with solos from Nimmer and Elliot Mason on trombone before a drum solo from Colvaire links the composition’s cocktail of emotions together.

On “Rising out of Hatred,” disc two’s opener, a noirish orchestration punctuated by piercing, plaintive calls from Tatum Greenblatt’s muted trumpet serves as score to the story of two college kids—one an observant Jew, the other the heir to a prominent white nationalist family— able to forge an unlikely friendship borne from their shared humanity.

Brady returns as author and spoken-word performer on “A Piece by the Angriest Black Man in America (or, How I Learned to Forgive Myself for Being a Black Man in America).” Accompaniment is limited primarily to Henriquez and Calvaire who cultivate a coffeehouse poetry-slam vibe.

It’s on that note that we transition to “Forgiveness,” Nash’s fully instrumental interpretation of the concept. Marsalis, Nimmer, and Nedzela are featured generously here, on what is perhaps Transformation’s most symphonic piece, characterized by distinct movements, as forgiveness is not something one arrives at instantly but, instead, incrementally, in stages.

Transformation closes with “Wisdom of the Humanities” and “Reaching the Tropopause.” On the former, Irving returns to read words written by biologist E.O. Wilson that offer a stern warning to humans. Wilson marvels at mankind’s but condemns “greed and ignorance” for threatening the environment, calling for a “new transformation in the human status” if we are to save our planet. The latter, borrowed from Tony Kushner’s Angels in America, sees both Brady and Close fittingly returning to lend their voices to the program’s culmination. Meanwhile, Nash’s musical response brings the words to life. Propelled by the rhythm section, Marsalis and Goines soar above the rest, first with individual solos on trumpet and tenor sax, respectively, then trading licks with each other before a dramatic ending.

It’s the type of ending that provides energy as well as the emotional and intellectual heft. It also motivates in a very immediate sense, making for a timely mixture of qualities to aid in the transformations we all seek this year.