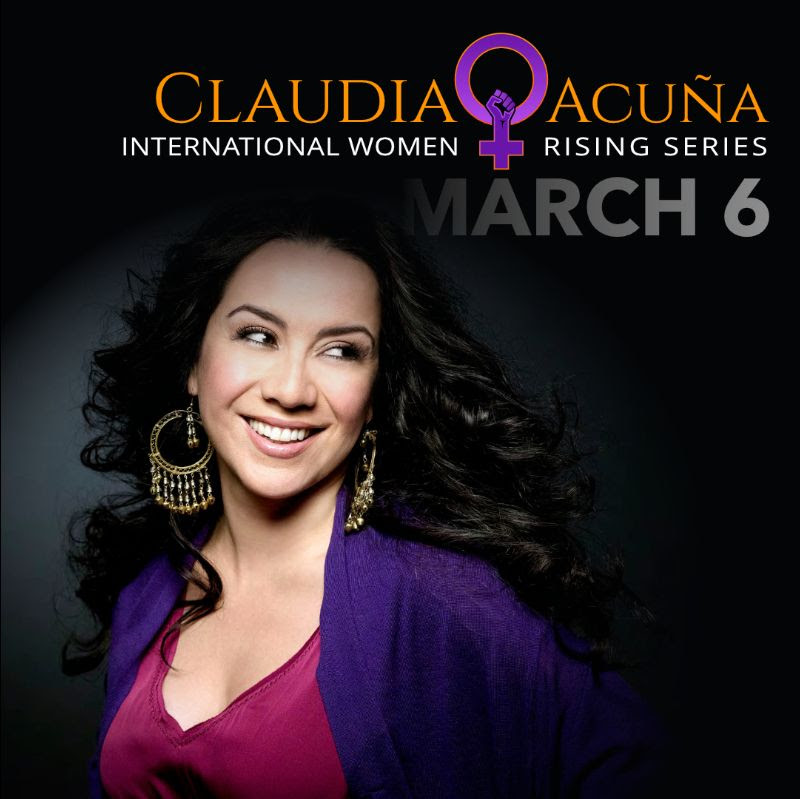 Latin Grammy Award nominee Claudia Acuña, in association with Laudable Productions, will co-produce and perform a two-part musical celebration on March 6, 2021 in honor of International Women’s Day. The event will consist of two distinct concerts entitled “Wind from the South” and “The Art of Bolero,” as well as a few special surprises. Acuña will be joined by Pablo Vergara on piano, Carlos Henderson on bass, Juancho Herrera on guitar, and Rodrigo Recabarren on drums. The concerts will be broadcast live from the historic opera house at the Northampton Academy of Music Theatre in Massachusetts, featuring a six camera shoot to capture the intimacy of both the historic venue and performance. Audience members are invited to join via Zoom, as the artists will have a view of the call through a projection onto the wall of the orchestra pit. Tickets are available here.

The first show, “Wind From The South,”  is a retrospective on Acuña’s five albums as a solo artist, chronicling her journey from her birthplace in Chile to her present-day home in New York City; from her debut album on Verve Records to her most recent Latin Grammy nominated album, Turning Pages. “Wind From The South,” will begin at 3pm EST on March 6.

A special meet and greet conversation will take place, prior to the second performance. The second concert is a tribute to Acuña’s upcoming project, “The Art of Bolero.” Inspired by this romantic musical tradition, Acuña will interpret traditional Bolero songs and include a tribute to the iconic composer/singer Armando Manzanero, along with some contemporary material. “The Art of Bolero” will take place at 8pm, EST that same day.

At 20 years old, Acuña sold all of her possessions and immigrated to the US to pursue her love for jazz. With no knowledge of the English language and little more than her own ambitions, she began appearing at jam sessions and gained recognition as one of the most intriguing and original vocalists on the scene. “She sings in the tradition of the great ones.” remarked Abbey Lincoln, “Her sound is her own.”

Join us in celebrating the vital contributions of women in the arts like Claudia Acuña as a part of the 2021 International Women Rising Festival. Broadcast live from the historic Academy of Music Theatre, this spectacular event weaves together a tapestry of musical performances and conversations with distinguished artists and leaders in gender equity.

MORE ABOUT THE ARTIST:

Born July 3, 1971 in Santiago and raised in Concepcion, Chile, Claudia Acuña established herself on the Chilean jazz scene in her early 20s. When she arrived in New York City in 1995, she quickly gained recognition as a leading voice on a scene rapidly being transformed by a wave of brilliant Latin American musicians. Part of the roiling cadre of creatively ambitious young players making noise in some of the smaller jazz clubs in New York’s Greenwich Village, the Chilean vocalist plunged into collaborations with masters such as George Benson and Tom Harrell and kindred spirits including pianist Jason Lindner (who later worked on David Bowie’s final recording), band leader Arturo O’Farrill, pianist/arranger Guillermo Klein, and bassist Avishai Cohen, who co-produced her critically-acclaimed 2000 debut Wind From the South, the first original release by a Latin artist on the legendary Verve Record label.

She quickly gained widespread visibility when her version of Antonio Carlos Jobim’s “Suddenly” was featured on the soundtrack for the 2000 film Bossa Nova. The following year she recorded the single “Slavery Days” with house music producers MKL and Soy Sos of 3 Generations Walking, a widely-licensed track that gained her substantial exposure outside of the jazz world.

Her first five albums as a leader established Acuña as a creative force, from 2002’s Rhythm of Life (Verve) and 2004’s Luna (MaxJazz) through 2008’s In These Shoes (Zoho Music) and 2009’s strikingly beautiful En Este Momento (Marsalis Music). Whether reimagining jazz standards from a South American perspective, bringing infusing Afro-Caribbean material with a wide rhythmic sensibility, or presenting her powerful original material with stunning conviction, Acuña stands out as a passionate and emotionally incisive singer with a gleaming, burnished bronze tone and a penchant for the unexpected.

Her keen intelligence and intrepid spirit has made her the vocalist of choice for many of jazz’s most creative figures, and rather than stagnating over the past decade, she’s thrived by pursuing multiple musical directions. Drummer Susie Ibarra incorporates Acuña’s voice as part of the instrumental mix with strings and electronics on 2017’s Perception (Thrill), while the Grammy Award-winning pianist, composer and arranger Billy Childs expanded on one of her tunes for the title track of 2017’s Rebirth (Mack Avenue), a piece that also features her gorgeous wordless vocals. The past few years have also found her working with legendary saxophonist/composer Henry Threadgill, the Rodriguez Brothers, and Cuban pianist Elio Villa-Franca.