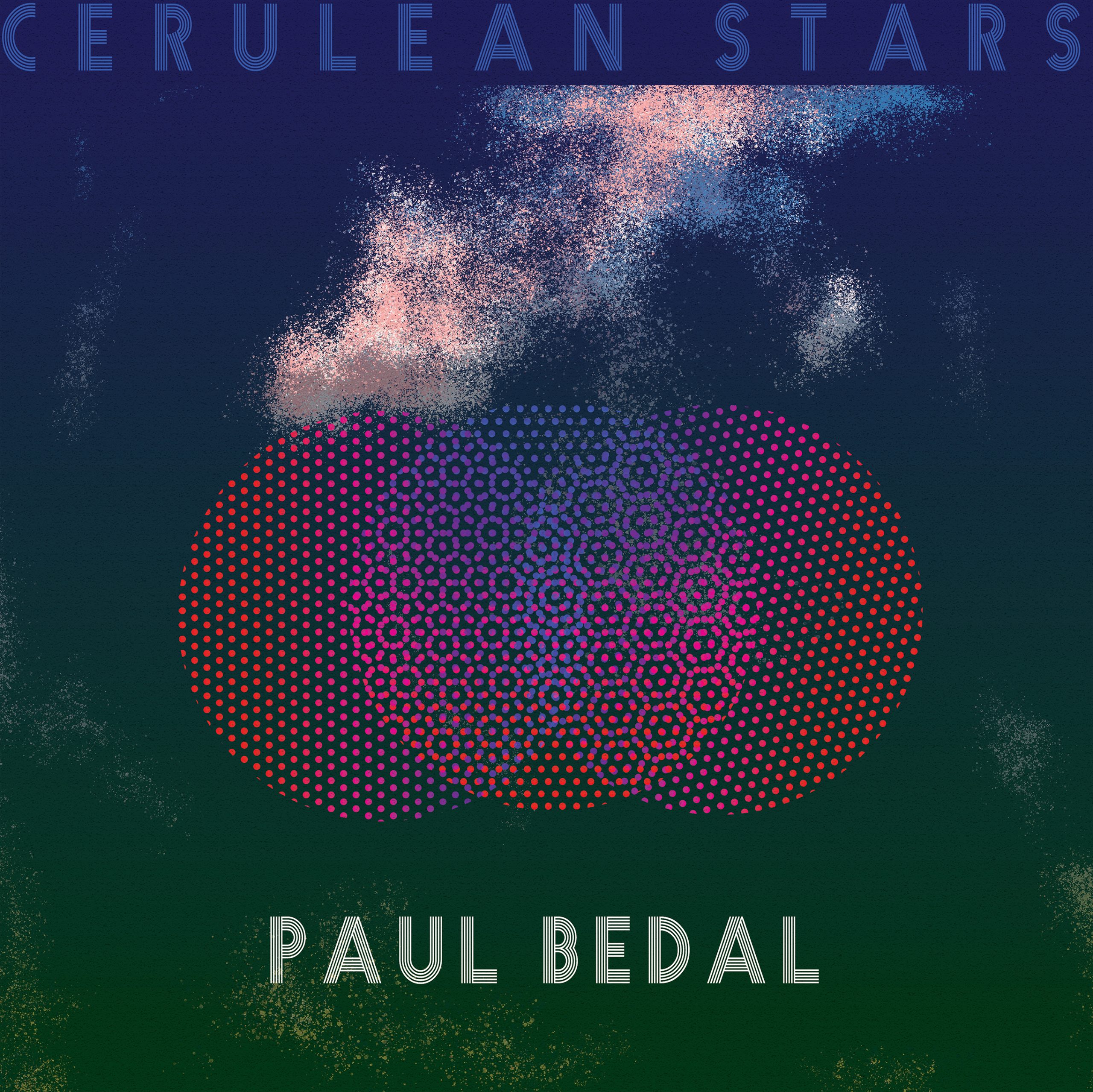 Pianist Paul Bedal’s Cerulean Stars is out on March 12, 2021 via BACE Records

On Cerulean Stars, classical leanings and jazz formalism intersect with the post-freedom aesthetic of Chicago’s storied avant-garde. Pianist Paul Bedal and company – alto saxophonist Nick Mazzarella, bassist Matt Ulery and drummer Charles Rumback – have seamlessly blended their diverse experiences, investing his fully structured compositions with liberating energy. He provides the blueprint, and his cohorts color outside the line on this vibrant new release, which streets March 12, 2021 via BACE Records.

Cerulean Stars features the same lineup from Bedal’s previous release In Reverse. “It’s amazing to have musicians like Nick, Matt, and Charles with me,” says Bedal. “They already have such a strong presence of their own, leading their own groups, that I’m excited to have them melding into this music. I think the album would come across as totally different with other sets of players, and I just like this kind of edge that Nick and Charles bring to it.”

Mazzarella’s work on Cerulean Stars may surprise listeners who know him primarily as a post-freedom improviser, ensconced on the busy and influential Chicago avant-garde landscape. He has appeared in ensembles led by new-music giants Ken Vandermark and Mike Reed; in duos with cellist Tomeka Reid and drummer Tim Daisy; and leading or co-leading several small ensembles.  But the saxophonist (who has appeared on some 35 albums to date) has recently expressed a desire to move toward more structured formats – his original love – and Cerulean Stars, like its predecessor, serves as a showcase for this side of his artistry. In return, Mazzarella’s intense adventurism, buoyed by his neon tone, lights Bedal’s compositions from within.

Drummer Charles Rumback is Mazzarella’s fellow traveler on Chicago’s contemporary music scene, which boasts a fluidity that allows and even impels improvisers to move freely among genres. His resume includes several highly-regarded albums under his own name, as well as recordings by the groups Stirrup and Colorist, saxophonists Caroline Davis and Dustin Laurenzi, and cellist Fred Lonberg-Holm’s Lightbox Orchestra. Rumback’s style emphasizes texture and nuance. Rather than barge and bash with untrammeled force, he fills his playing with nuanced.

Balancing all this is Matt Ulery, whose reputation as a composer – of jazz tunes, art songs, jazz-folk hybrids, big-band charts, orchestral works, and cinematic themes in search of a movie (among others) – almost overshadows his versatility as a bassist. His adaptability has allowed him to collaborate with the GRAMMY-winning classical ensemble Eighth Blackbird on the one hand, and hip-hop/jazz instigator Makaya McCraven on the other; he has also led 10 wide-ranging albums of his own. Bedal considers Ulery an inspiration for his own writing: “Just listening to Matt’s music, and recently playing in a lot of his groups, made me try to write things that I know the players would appreciate,” Bedal notes.

The pianist’s relationship with Ulery and Rumback stretches back nearly a decade, giving these disparate artists the chance to establish a comfort level – an ease, but without complacency – that becomes one of the disc’s real joys over repeated hearings. Since 2016, this rapport has encompassed Mazzarella as well, and it plays a vital role in Bedal’s compositions: deceptively challenging songs that sound less knotty than they ought to, thanks to Bedal’s ingenuity and to the tight mesh of the band.

For one example, turn to the opening track, “Iris,” an off-kilter melody that reflects the writing of Keith Jarrett, one of Bedal’s main influences. The melody rides atop a complicated, unorthodox harmonic scheme, and even months after the recording, Bedal remains impressed with Mazzarella’s approach to soloing on these chords – “especially some of the ways he tackled the harmonies, which I don’t think many other people would do around here,” Bedal says. “It’s kind of like sheets of sound, but it’s still handling all the harmonies.”

Bedal gravitates toward pure melody, as befits a pianist who cites not only Jarrett but also Brad Mehldau, Herbie Hancock, and especially Bill Evans among his jazz heroes. But the clear-cut forms of Thelonious Monk’s compositions are another touchstone, along with light touches of Latin rhythms, which he picked up while studying at University of Miami (Florida), and which reinforced his early exposure to the infectious drive of pianist Michel Camilo, a favorite of Bedal’s musician father. Hints of the Caribbean show up on “Citrine,” but Bedal and Rumback employ this element with extreme subtlety. It isn’t garishly slapped onto the tune, but rather infused into the performance’s DNA, where it becomes one of many strands.

On “Panorama” and “Compass,” two of his more recent compositions, Bedal chose to set certain parameters rather than let the song come to him. “Panorama” builds upon varying permutations of the opening strains, which culminate in the ascending/descending motif first heard fully at 00:30; the ebb and flow of these permutations creates a swirling momentum during the solos that follow. On “Compass,” Bedal devised a formula to determine the intervals guiding the movement of the bass line, and then constructed the chord progression upon that. The piece has a majestic sweep epitomized by Mazzarella’s soaring solo – it mixes lyrical stretches with fluttering flights – and a piano solo of particular depth.

Bedal shines again on “Summer Fade,” the melody of which finds common ground with both Keith Jarrett and another longtime favorite of Bedal, the Armenian-born pianist Vardan Ovsepian. Ovsepian’s compositions tend to be more self-consciously pianistic, and that influence figures in Bedal’s solo, which emphasizes the interaction between left- and right-hand movement; after that, Mazzarella channels some inner Coltrane (and a bit of Eddie Harris’ highly evolved funk, too). The album concludes with the aptly titled “Free,” a slow-moving lullaby underscored by Rumback’s chittering brushwork, which leads to a section of unstructured improvisation.

That leaves only the brooding mystery of the title track, which at first recalls the main theme from the “Harry Potter” films. Its clockwork melody would seem to offer the tightest restrictions for improvising of any of these tracks. But the tune opens up into a full-blooded swinger, as Ulery and Rumback propel the melody’s stutter-step rhythm into an asymmetrical but irresistible force. “It started out as more of a piano piece,” Bedal says, “and then I kind of fleshed it out for the group.”

That makes “Cerulean Stars” the outlier, since Bedal has so clearly conceived most of this repertoire for the quartet as a whole. But it speaks to that very wholeness – the valence that binds this band together – that this one fits right in.

Paul Bedal is a pianist and composer based in Chicago, Il. Earning his Bachelor of Music in Studio Music and Jazz Performance at the University of Miami and his MFA in Film Composition from Columbia College Chicago, Paul has stayed active in the 2010’s writing for his own groups and contributing his pianistic efforts as a sideman.

Bedal is an ears&eyes, CAM Jazz and BACE Records recording artist, with his debut record Chatter being released in 2014. Paul’s second release, Mirrors and third, In Reverse received critical acclaim.