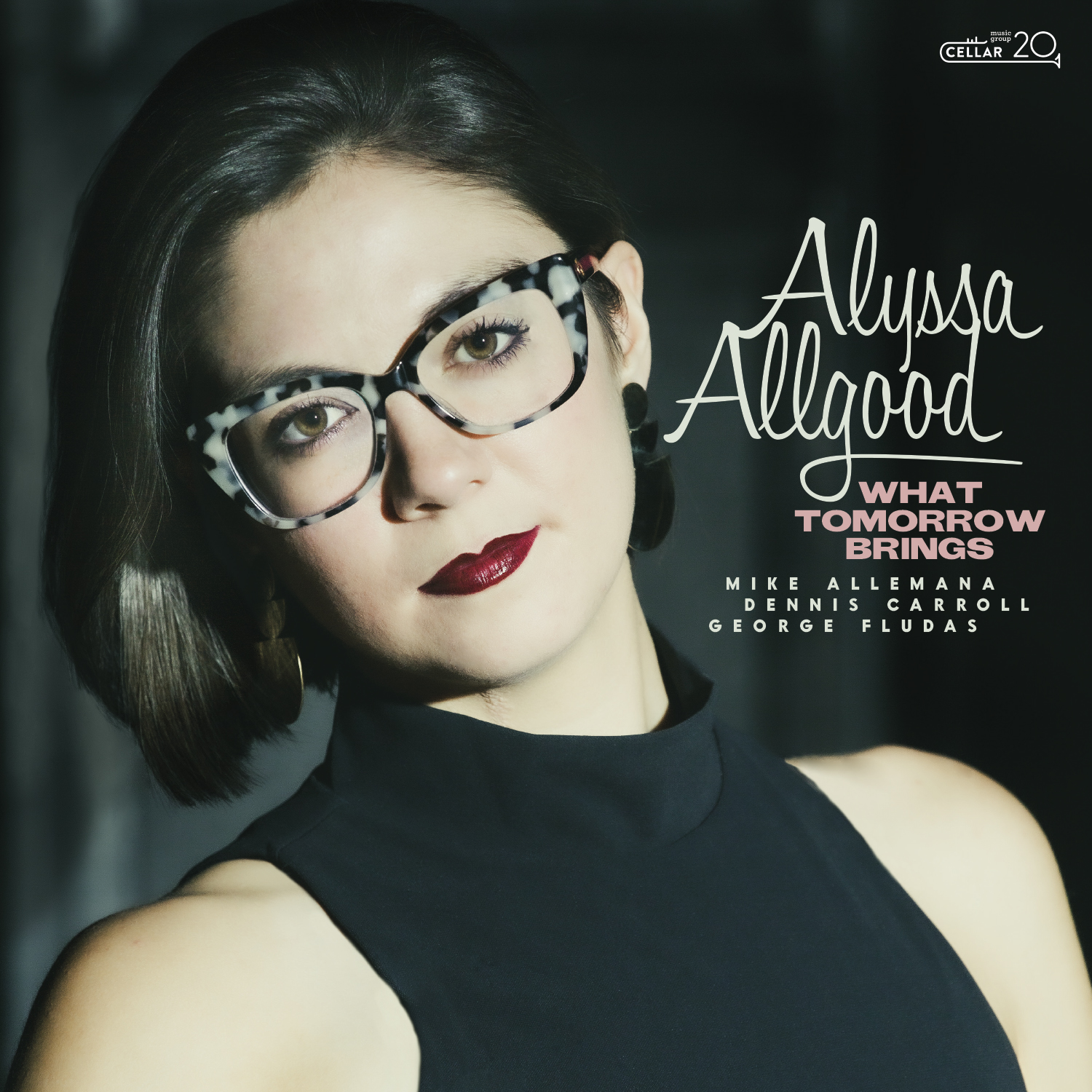 “…she is undeniably skillful at what she does. The expressive Chicagoan wears different hats, from scat singer to interpreter of familiar lyrics, to lyricist—and she shines in all of those areas.” – The New York City Jazz Record

Cellar Music Group is proud to announce the April 9, 2021 release of What Tomorrow Brings, a new album from critically acclaimed vocalist Alyssa Allgood. Daring and personal, What Tomorrow Brings is the Chicago-based vocalist’s most sophisticated offering yet. Wielding her instrument with extraordinary nuance and depth, Allgood takes listeners on an introspective journey of growth and self-discovery in the form of eight refined interpretations of classics and four originals. Joining Allgood is a trio made up of Chicago’s finest including guitarist Mike Allemana, bassist Dennis Carroll and drummer George Fludas.

What Tomorrow Brings is Alyssa Allgood’s third studio release and reflects a couple years of tremendous growth for the vocalist. Allgood’s exciting new professional developments were heightened by the success of her previous album Exactly Like You (Cellar Live, 2018). Named “the vocal record of the year” by Chicago Jazz Magazine, the sophomore release propelled her to the upper echelon of great contemporary jazz vocalists, expanding her audience beyond Chicago from New York to Shanghai. Of course, the biggest change of all took place last spring, when the Coronavirus Pandemic changed life as we know it. “I’ve had a lot more time alone, getting to know myself better,” says Allgood: “Time to be outside, to read, and to deal with moments of change and loss. They’re all opportunities to grow closer to who we are.”

This time of soul searching is reflected on What Tomorrow Brings, the central message of which speaks to finding an openness to life’s challenges and developing the ability to embrace them as opportunities for growth and discovery. The selected repertoire has been ordered deliberately, giving listeners a strong narrative thread throughout that mirrors Allgood’s own personal journey. The substance of these songs reveal her deepening connection to life’s kaleidoscopic emotions, as she delves into the nuanced feelings of longing, regret, introspection, hope, courage, and love. “I hope the listener will feel the harder emotions at the beginning,” she says, “and then a shift about halfway through [right around the beguiling “Time Found” and “Bridges,” the haunting Milton Nascimento classic]. And then comes the sense that we’re getting into something uplifting – that even though what tomorrow brings is unknown, there’s still hope.”

Allgood takes inspiration from many of her musical idols including Abbey Lincoln, Dinah Washington, Carmen McRae, and Billie Holiday and particularly how they all funneled their considerable technique into making the words as meaningful as the melodies. Their example has steered Allgood toward greater nuance in service of storytelling. “I’m trying to make lyrical expression the focal point of what I’m doing,” she explains.

Highlights include “This Bitter Earth,” where she bends notes and commands the rhythm to etch each twist of the dark/light lyrics. In her duo version of “For All We Know,” her rain-pure timbre and heartbreaking inflections dovetail with Mike Allemana’s genius for accompaniment. On “Passing Glance,” Allgood uses her lovely control of dynamics to bring the song into subtle bas-relief before a high-flying coda.

As her interpretative authority continues to flourish, she needn’t shout to tell every story; she can also whisper. On another strong cut, the Eastern-tinged arrangement of “Mad About the Boy” she does both. With liberal phrasing and tonal flutters, Allgood lets you see a raised eyebrow here, a rueful smile there – and finally, with daring swoops into the upper register, a level of passion that juxtaposes the cool composure the lyrics strive to maintain.

Allgood works here with three of Chicago’s most in-demand and highly skilled musicians, all of them many years her senior, and she stands effortlessly with them in this compact, thrillingly interactive quartet. The intimate instrumentation of guitar, bass and drums lends itself well to the proceedings, and the atmosphere is enhanced by the strong musical connection, built on trust, between the musicians. “These musical relationships have opened up my connection to and expression of myself in performance,” explains Allgood, adding, “I sing, listen and create from an honest place and my voice has found strength in the openness I share with my band and my audience.” With this offering, Allgood marks a time of major artistic and personal growth, and welcomes listeners to come along on the engaging journey with her.

Derived from liner notes by Neil Tesser, Grammy-award winning writer and critic, author of The Playboy Guide to Jazz.

Alyssa Allgood is a renowned vocalist known for “her technical control and [the] creative imagination of her work” (Howard Reich, Chicago Tribune). She has been described as an “impressive bop-oriented singer” by DownBeat Magazine and “an emerging talent of considerable strength” by The New York City Jazz Record.

Allgood was named Best Jazz Entertainer in the 2019 Chicago Music Awards. Her performance accolades include a residency at the Jazz at Lincoln Center Club in Shanghai, appearances at Birdland Jazz Club in New York City, and headlining appearances at the Green Mill, the Jazz Showcase and Winter’s Jazz Club in Chicago. Allgood has also appeared at the Chicago Jazz Festival, the Dakota, the Jazz Estate, Noce Jazz Club and the Shadbolt Centre in Burnaby, British Columbia.

She won the first Ella Fitzgerald Jazz Vocal Competition held in Washington D.C. in 2017, where part of her prize was to join the “Four Generations of Miles Davis” Band for a song at the famous Blues Alley. Other notable awards include being named a Finalist in the 2016 and 2017 Sarah Vaughan International Jazz Vocal Competitions, a 2016 Jazz Fellow through the Luminarts Cultural Foundation in Chicago and second place winner in the 2016 Mid-Atlantic Jazz Voice Competition. She also placed as a Semifinalist in the 2015 Shure Montreux Jazz Voice Competition; where she competed live in Switzerland for a jury presided by jazz legend Al Jarreau.

Allgood has released two albums: Out of the Blue in 2016, and Exactly Like You in 2018 via Cellar Live. Both received nationwide critical acclaim, including positive reviews from Downbeat, The New York City Jazz Record, The Huffington Post, Chicago Jazz Magazine and others. Critics consistently praised Allgood’s instrumental approach and accomplished scat and vocalese singing.