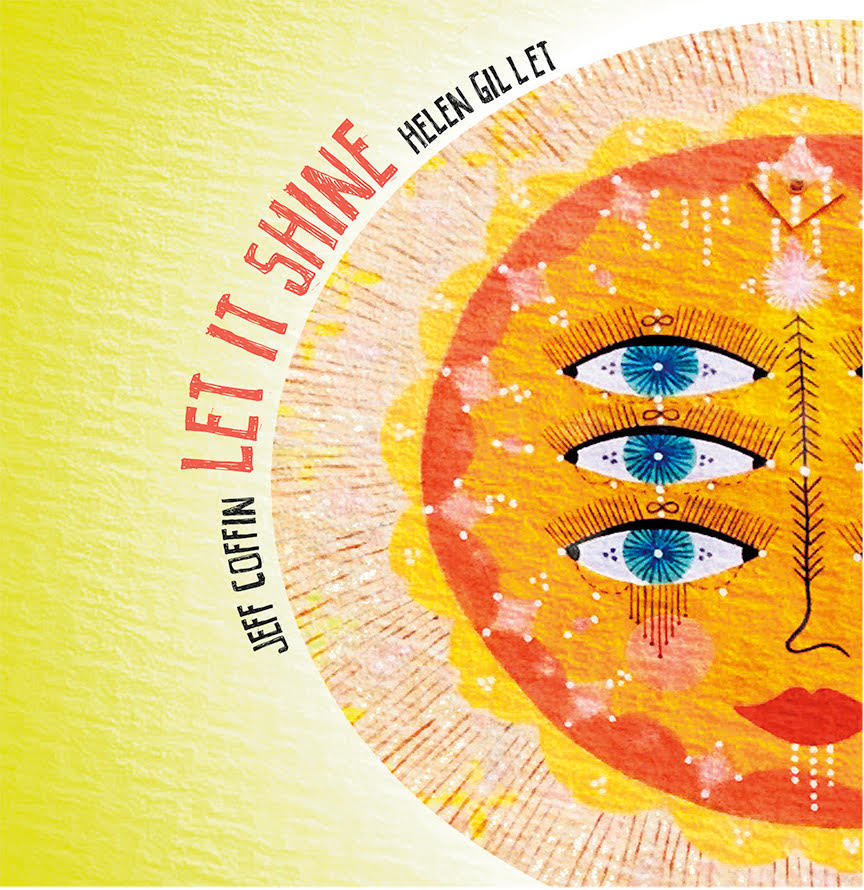 Ear Up Records is pleased to announce the March 19, 2021 release of Let it Shine, an expressive new duo album from consummate saxophonist, composer and educator Jeff Coffin and celebrated cellist, vocalist and composer Helen Gillet. Demonstrating the prowess of both of these master multi-instrumentalists, Coffin and Gillet perform a total of 13 instruments between the two of them, with Gillet occasionally augmenting the sonic tapestry with the looping of her cello. Additionally, several tracks on Let it Shine features another master musician and longtime Coffin-collaborator Roy ‘Futureman’ Wooten on cajon.

Renowned for his work with Dave Matthews Band and his 14-year tenure and 3 GRAMMY award wins with the genre-defying Bela Fleck and the Flecktones, Jeff Coffin is an undeniable force on his instrument. Coffin has released nearly 20 albums as a bandleader on Ear Up Records and remains one of the most in-demand saxophonists in the world as well as a first-call studio musician in Nashville, where he has lived since 1991. He is featured here alongside eminent singer-songwriter and cellist Helen Gillet whose exploration of the rhythmic and textural nature of the cello in conjunction with synthesized sounds and her haunting alto voice have electrified audiences for decades. Akin to Coffin’s propensity to defy genre, Gillet’s stellar creative output melds elements of rock, punk as well as Belgian folk tunes and a distinct New Orleans influence to create unique aural atmospheres.  Here, we are privy to the meeting of these two musical polymaths. Let it Shine captures the fresh energy of new collaboration between two masters of their craft.

The duo had performed together only three times before deciding to record this album at Coffin’s studio in Nashville in August, 2019.  In preparation for a performance at the Side Bar during NOLA Jazz Fest that same year, Coffin composed five new pieces for woodwinds and cello. Coffin notes “I was intrigued by the sonic possibilities her cello looping and my woodwinds might come up with. I could say that the results exceeded my expectations but I expected that it would be amazing. I wasn’t wrong. This project is one of my favorite things I have ever done.”

A masterclass in counterpoint and thoughtful interplay, Let it Shine imbues themes of hopefulness and serenity with each nuanced refrain. Coffin notes about his colleague, “She is at once deeply rooted, historical, forward reaching, in the sky, pushing, prying, releasing, taking charge, acquiescing, leading, following, empathic, subtle, liquid, she’s air and fire, earth and sky, Helen Gillet is a profoundly powerful musical spirit.”  Gillet echoes Coffin’s sentiments adding, “Jeff has a generous and energetic spirit that lights up the whole process of making an album.”

Let It Shine takes listeners on an eclectic musical journey that pulls from both musicians’ deep and versatile experience. The album begins with the rubato, contrapuntal “The Sun Never Says”, a piece composed by Coffin which hits the ear as a sort of musical mantra.  The composition has a melody based on the rhythmic inflections and unfolding meaning of a sufi poem by the poet Hafiz. This is immediately followed by a solo cello intro to the dynamic “Lazy Drag Jig”, a piece which demonstrates the fullness of sound that the duo achieves.

“Unzen”, composed by Gillet, is a tribute to the great Charles Mingus. The piece begins on a tender note with an improvisation from Coffin. Gilet joins, offering thoughtful support behind Coffin’s lyrical musings, seeming to channel Mingus’ energy in her comping and melodic interplay.

“Sometimes Springtime” begins on a tranquil note with some cello looping, giving way to a sultry melody doubled between the two players. The song features eloquent lyrics composed and performed, in French, by Gillet.  The following track, “Lampsi” features Roy “FutureMan” Wooten on the cajon, providing the rhythmic underpinnings for a driving groove that eventually spirals into musical entropy and then finds its way back by the end of the piece.

Gillet’s rhythmic experimentation is on full display beginning the epic “Sandman”, as the artist physically slaps her cello to establish the rhythmic cadence of the song. Underscoring Coffin’s melody, Gillet loops a driving cello ostinato that propels the piece forward amidst cascading layers of percussion and woodwinds. The album concludes with a piece by one of Gillet’s cello heroes Ernst Reijseger.  “Do You Still”, is a deeply evocative composition, delivered here with a deep emotional depth.

Let It Shine is a welcome addition to the Ear Up catalogue, and a much-needed panacea during these troubled times. Coffin offers: “The uniqueness of sound, the subtleness of timbre, the willingness to explore and create are just a few of the elements on display here. If you feel a fraction of the joy listening to this music that we felt making it we will have done our job well. Thank you for listening with open ears and an open heart.”