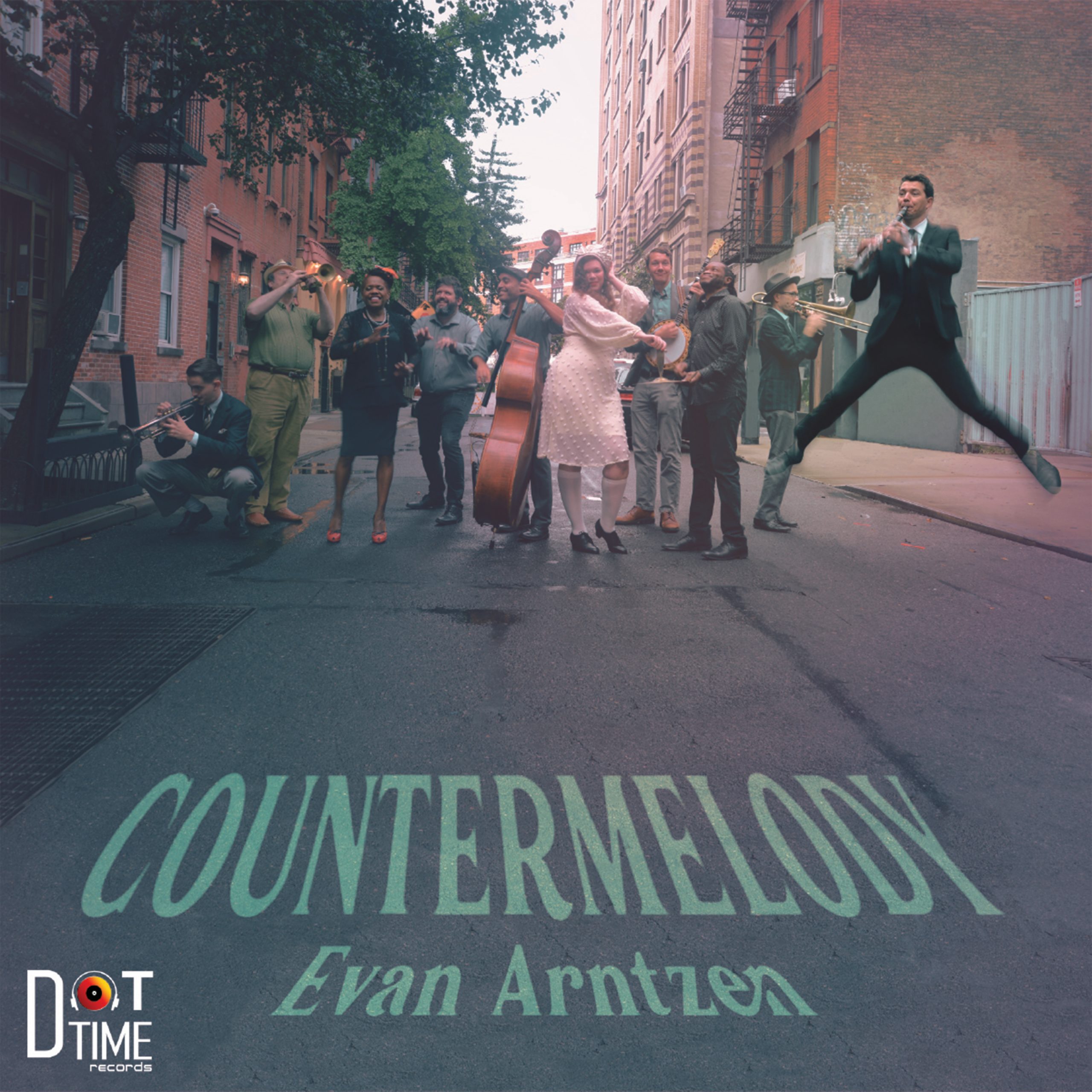 Dot Time Records is delighted to announce the latest release from multireedist, vocalist and bandleader Evan Arntzen.  Arntzen’s third album as a bandleader, Countermelody is a celebration of the interplay, collective improvisation and soulful counterpoint that played such a big role in Black American Music emanating from New Orleans in the first half of the 20th century.  During a time when convening is all but impossible, Countermelody brings the gaiety of live music to the recorded realm.  Recorded on October 2nd and 3rd, 2020, the group of stellar musicians featured on Countermelody gathered together to create music that will inspire listeners everywhere to get up, share joy and dance.  Arntzen’s superb reed and vocal musings are joined by trombonist Charlie Halloran, trumpeters Jon-Erik Kellso and Mike Davis, guitarist and banjoist Arnt Arntzen, pianist Dalton Ridenhour, bassist Tal Ronen, drummer Mark McLean and very special guest vocalist Catherine Russell.

Countermelody brings early-jazz-exuberance to an eager present in a release which author and Louis Armstrong historian, Ricky Riccardi, calls “the very definition of timeless” in the album’s liner notes.  Arntzen’s Dot Time Records debut features many of his own astounding arrangements of early New Orleans and Chicago jazz compositions written by such luminaries as Kid Ory, King Oliver, Sidney Bechet and Bennie Moten.  The release also features wonderfully innovative compositions by Arntzen, Halloran and Kellso.  Aside from thirteen hi-fidelity tracks, listeners will also be treated to tracks that were recorded to wax cylinder, a medium that actually predates when much of this music was composed.  Producer Scout Opatut notes “the wax cylinder recordings were made possible by the genius Colin Hancock, who engineered them with his Edison phonograph.  Everything you hear in those songs was done acoustically, without any electricity whatsoever.”

The album begins with Arntzen’s arrangement of the Kid Ory classic “Muskrat Ramble”.  The jubilant energy is palpable from the very first notes of the track, and uplifted even further by the powerful and soulful refrains of celebrated vocalist Catherine Russell.  Ricky Riccardi notes “Just seconds into the opening track, the four-horn ensemble tears through a chorus of ‘Muskrat Ramble’, each voice independently masterful on its own, the final product nothing short of miraculous.  Let it wash over you and then listen again and concentrate on a single instrument; in fact, do this for every instrument and you’ll marvel at the individual and collective brilliance of each musician present.”

Arntzen’s vocals soar on the Sidney Bechet popularized “Georgia Cabin” before the bandleader is featured in a wonderful display of his improvisational facility.  Interestingly, this seems to be the first-ever recording of this composition with its lyrics intact.  Arntzen notes that he learned the lyrics from his 93-year-old grandfather Lloyd Arntzen (a celebrated clarinet player in his own right, who is still performing to this day).  While the song is well-known as an instrumental, Evan’s grandfather credits Mary Karoley for writing the lyrics (she is indeed listed as a co-composer of the song).

One cannot bypass the musical cohesion of the ensemble on tracks like “Smiles”.  This bright-tempoed classic prominently features Arntzen’s melodic refrains but is supported brilliantly by Halloran’s counterpoint and an elastic rhythm section.  The ensemble welcomes back the esteemed Ms. Russell for the exquisitely nuanced “If You Were Mine”.  Russell’s warmth and zeal breathe life into this timeless composition, first made famous by Billie Holiday, and are complemented perfectly by the strength of the ensemble.

The group brings an exceptional intensity to Benny Green’s “Bu’s March” in which Ridenhour is featured with a powerful solo.  Interestingly, composer Benny Green helped Arntzen to arrange this piece for a larger ensemble.  Of course, Green wrote this song in honor of his former mentor and bandleader Art Blakey, and the vigour of the Jazz Messengers is conjured in Arntzen’s new, 3-horn arrangement.  The sole original composition by Arntzen, “Solitarity”, is a moving comment on the shared solitude of our modern existence. The piece begins with Arntzen’s solo clarinet refrains eventually building into a contrapuntal duet, ending with a raucous second-line ensemble.

Evan Arntzen is a clarinetist, saxophonist and vocalist originally from Vancouver, BC. He is the third generation of a musical family, and began learning New-Orleans-style clarinet from his grandfather, Lloyd Arntzen, at the age of seven. Since moving to NYC in 2014, Evan has performed at Jazz at Lincoln Center, Cafe Bohemia, Birdland, Town Hall, Mezzrow, Smalls, Symphony Space, as well as festivals and venues around the world. He holds the lead saxophone chair in Grammy® Winning Vince-Giordano’s Nighthawks, and performs with Catherine Russell, Jon-Erik Kellso and The EarRegulars. Evan is featured on notable recordings by Bria Skonberg (Sony Masterworks), Kat Edmonson, Loudon Wainwright III, and the award-winning soundtracks for HBO’s Boardwalk Empire and Bessie. He has also released three critically-acclaimed albums as a leader, including 2021’s Countermelody on Dot Time Records, which was produced by Scout Opatut (4/4 Creative).

“[A]rtists like Evan Arntzen represent a new generation of musicians exploring the [clarinet’s] possibilities… Evan presents an effortlessly fluid and lyrical approach in his playing that could convince even the most ardent hard-bop enthusiast to reappraise the sounds of Jimmie Noone or Buster Bailey.” – Seton Hawkins, jazz scholar