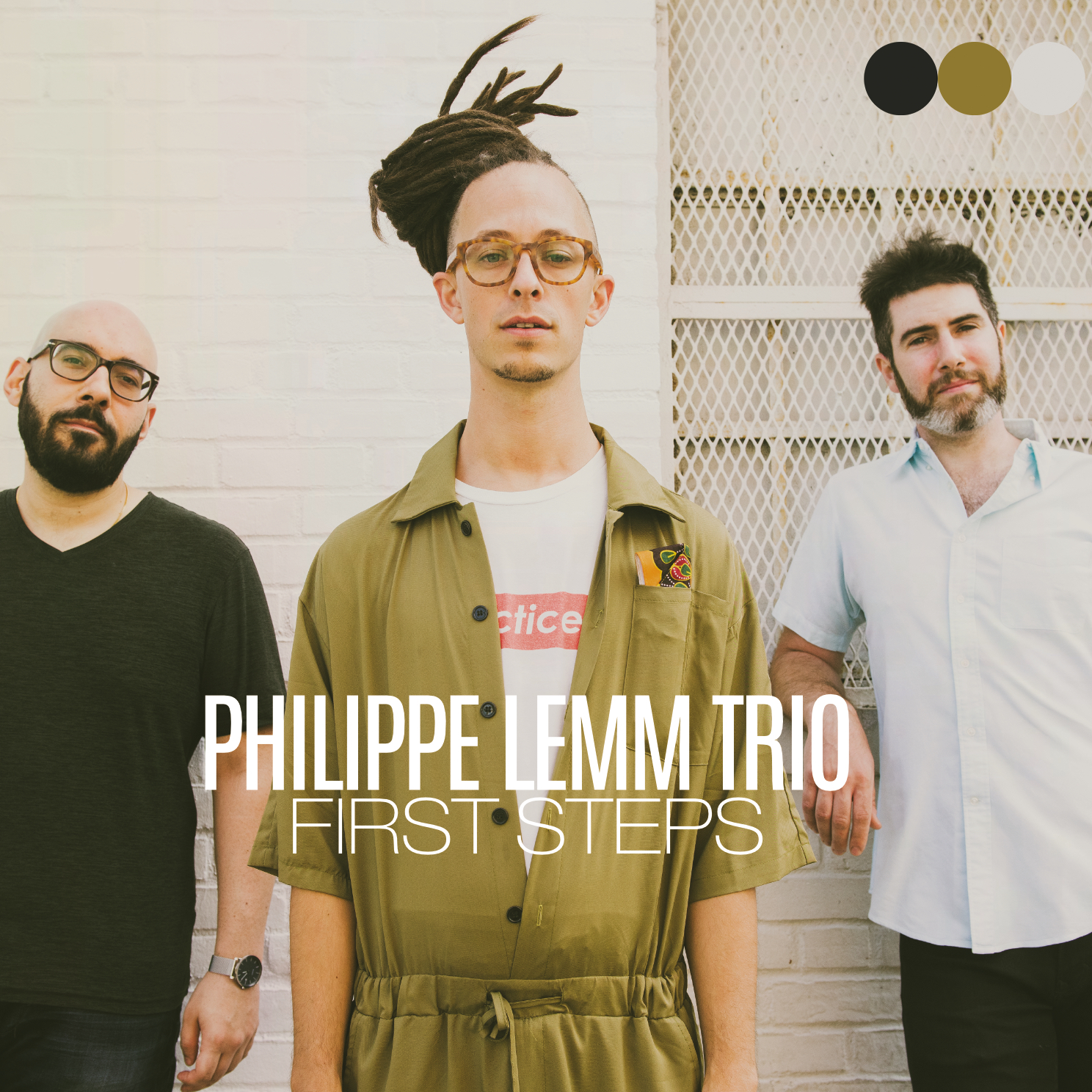 First Steps, Out 3/26 on Outside in Music

Outside in Music is thrilled to announce the latest studio release from the Philippe Lemm Trio, First Steps, out March 26.  First Steps demonstrates the trio’s unique, dynamic voice developed after ten years of stellar creative output and consistent touring from the vivacious group. A bittersweet moment for the bandleader, this release celebrates the life and musicianship of longtime friend and collaborator, pianist Angelo Di Loreto who passed away in October of last year.  Alongside Lemm’s drums and percussion and Jeff Koch on bass, Di Loreto’s musical voice is woven intrinsically throughout the album’s tracks.

Thematically, First Steps is centered around the bandleader’s background in dance.  Lemm notes “Before I played the drums I was a dancer, and in a way, I still feel like the drums are my expression of movement.”  A reflection on the events of the past year, Lemm indicates “2020 felt like an uncertain choreography.  We had to practice slow-dancing by ourselves and learn to maneuver without reference.  It dictated its own movement and made us more aware of our fundamental need for one another and how much we desired our dance partners.”  Musically, First Steps draws inspiration from traditional folkloric dances and their rhythms while some songs are more based on reflecting on life and the events of the past year.  The overall message is “Keep moving, keep flowing, be flexible.”

Lemm, Koch and Di Loreto first met as students a decade ago at Manhattan School of Music. Immediately, the trio gravitated towards each other and formed an immediate musical and personal connection. Lemm notes “immediately, we played with no agenda, and with an honest and open mind”.  This impassioned playing sustained the group through ten years of performance, during which time the trio debuted at such esteemed institutions as Bimhuis (Amsterdam), North Sea Jazz Festival, the Blue Note (NYC), Ronnie Scott’s (London) and the Kennedy Center (Washington D.C).  The trio even won the 2015 B-Jazz International Contest in Belgium, in which Di Loreto was named ‘Best Soloist’.

First Steps contains songs written by Philippe Lemm, along with several compositions penned by Di Loreto.  “Music is healing,” the bandleader laments, “I enjoy and want to keep playing Angelo’s compositions to keep his work and his spirit alive.  His death was so abrupt, It helps everyone to cope with the loss in a more gradual way.”  He adds “Di Loreto was such a huge part of the piano trio’s sound”.  First Steps conveys a celebration of the music Di Loreto wrote as well as songs that were born from experiences that the late pianist shared with the bandleader.  The album is one of the last documents of Di Loreto’s musical output and it encapsulates the beautiful person that Di Loreto was, the joy he brought to so many, and the very intense and full life that he led.

Lemm and Koch will celebrate their late bandmate’s life and work as well as the release of First Steps with a February 21st performance at the Arts Garage in Delray Beach, Florida serving as the official album release show.  That performance will be preceded by a February 18th performance at Heartwood Soundstage and a February 19th performance at Timucua Arts Foundation in Orlando, FL.  The February 21st release show will be followed by a March 25th show at Bop Shop Records in Rochester, NY, and performances at PAUSA Art House in Buffalo, NY on March 26th and 27th. This tour is made possible with the support of Jazz Road, a national initiative of South Arts, which is funded by the Doris Duke Charitable Foundation with additional support from The Andrew W. Mellon Foundation.

First Steps begins with the Lemm-penned tune “The Kiln” which will be released as the first single on February 12.  Lemm’s driving and intensely polyrhythmic composition demonstrates the stunning interplay between these three masterful players right from the very start. The composer notes that the song was influenced by a family of potters that the group lived with while performing in Belgium.  Lemm recalls being inspired by this family that were so masterful at their crafts, creating beautiful objects with their hands.

“Kalief” another featured single, to be released on March 12, is dedicated to the memory of Kalief Browder, a young African American man who was wrongfully accused of a crime and was held in prison for several years before he was proven to be innocent.  In a devastating turn of events, the young man ultimately committed suicide.  Moved by the events, and disturbed by the racial injustice still so prevalent within American culture, Lemm composed this wistful ballad featuring guest soloist Simon Moullier on vibraphone.

In addition to original compositions, the album includes several expertly arranged cover songs that fit within the theme of the release.  “River” by Joni Mitchell is a song which grapples with mortality, hardship and change.  “Don’t Give Up” by Peter Gabriel is heard here in gorgeous form with Di Loreto and Koch volleying the melody parts between them.  According to Lemm, “the song itself applies so much to our current situation.”  The song centers around the notion of remaining optimistic in the face of disaster.

Lemm indicates “Music is my first step to connect to you, the listener, the observer, the dance partner.  Perhaps in person, maybe from afar but always in spirit.”