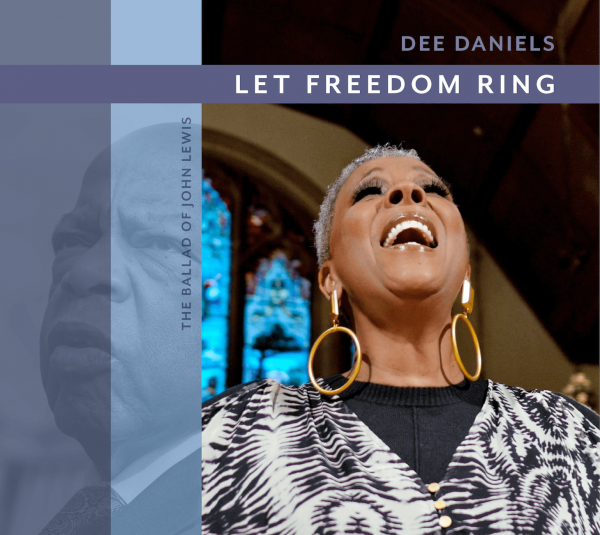 Cellar Music Group is proud to announce the January 18th release of the music video for “Let Freedom Ring (The Ballad of John Lewis)”, the powerful forthcoming single from vocalist Dee Daniels. Filmed at the Christ Church Cathedral in Vancouver, British Columbia, this evocative tune was inspired by the life of US Civil Rights Leader and House Representative John Lewis. Written in light of Lewis’s death on July 17th 2020, “Let Freedom Ring” is an uplifting anthem for a world on the precipice of a new beginning. The single will be available on all streaming outlets February 19th, but the video is available to watch now. Pre-save it here.

Two days before Representative Lewis’ passing, he wrote a powerful essay to the people of the United States entitled “Together, You Can Redeem The Soul of Our Nation.” Published in the New York Times, this poignant piece encouraged the nation to come together and “let freedom ring”. Daniels’ ambitious original song was created using 4 sentences from the text of Lewis’ essay, evoking his influential message.

John Lewis’ estate has given their heartfelt blessing for the use of Mr. Lewis’ powerful words in the song and music video, which features moments from his 2014 commencement speech at Emory University in Atlanta, Georgia. Said John Lewis’ son, John-Miles, after hearing the recording:

“‘Let Freedom Ring’ is a very moving composition that was inspired by the final words of my dad, John Lewis.  Dee Daniels is an incredible singer and it is heartwarming to hear this important message from my father put into song.”

“Let Freedom Ring (The Ballad of John Lewis)” was recorded with an orchestra and all-star rhythm section featuring multiple Grammy-nominee Larry Goldings on organ. The single was produced by Daniels, Emmy-winning artist Dave Pierce, and Executive Produced by Juno Award winner Scott Morin. The video was shot and edited by Katherine Penfold of Sandstone Studios, Vancouver.

This uplifting anthem is the first single from Daniels’ new album, The Promise, due out as a special Deluxe Edition on May 7th via Cellar Music Group. The Promise has already won Three Global Music Awards and the Western Canadian Music Award for Spiritual Artist of the Year.

Dee Daniels is one of North America’s treasures as a vocalist, educator, recording artist and live performer. A cursory look at some the highlights include: Teacher at the Conservatory of Music, University of the Pacific (CA) 2019 to the present; Adjunct Professor Vocal Jazz Masters Program, Aaron Copeland School of Music, Queens College (NY) 2013 – 2014; Artistic Director of the DeMiero Jazz Festival – a festival dedicated to Jazz vocals only (WA) 2011 – 2017; nomination for the Atlanta Theater’s 2010 Suzi Bass Award; the 2009 receipt of an Honorary Doctorate Degree of Fine Arts and 2008 President’s Award, both from Capilano University (North Vancouver); 2003 recipient of the prestigious Commemorative Medal for the Golden Jubilee of Her Majesty Queen Elizabeth II, and induction into the University of Montana’s School of Fine Arts Hall of Honor as well as a 1997 University of Montana Distinguished Alumni Award; a 2002 inductee into the BC Entertainment Hall of Fame with a plaque installed on Vancouver’s Granville Street Walk of Fame; and a command performance for the King and Queen of Belgium’s 25th Wedding Anniversary.