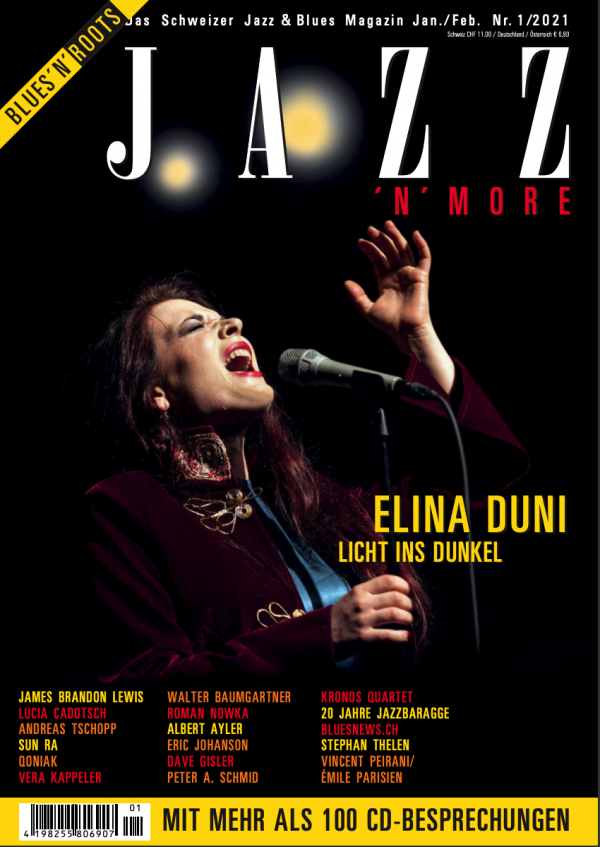 The Kaleidoscope Quintet- Dancing on the Edge
by Michael van Gee

This CD by the two masterful saxophonists and flautists Joe Lovano (*1952) and Dave Liebman (*1946), which was recorded at a concert on November 13th, 2013, in the well-known Deer Head Inn jazz club in Pennsylvania, can only be described as sensational, as it presents a quintet at the height of his Improvisation art. Dave Liebman and Joe Lovano have been playing together in a wide variety of line-ups since 2004, such as in the band Saxophone Summit with CDs on the Telarc label, ArtistShare and Enja. The CD program consists of two Joe Lovano compositions (“Topsy Turvy” from “Rush Hour” by 1995 and “Blackwell’s Message” from “Tenor Legacy” from 1993 (both Blue Note), both tracks with the singer Judi Silvano), two Dave Liebman compositions – “Day and Night” from the Album “Earth Jones” by the drummer Elvin Jones from 1985 (Palo Alto) and “Get Me Back to the Apple ”from the album“ Surreality ”from 2012 (Enja) – as well as the standard “There is no greater love”, in which Dave Liebman shines with a single intense solo together with the great rhythm team Tony Marino (b) and Michael Stephans (dr).

The band is the star. Seldom has a word been as true as with this quintet album, which was recorded in Stuttgart in November 1979. The five participants did not form a working band at all – an astonishing circumstance considering the organic group sound. The nominal leader was the trumpeter and singer Chet Baker (1929-1988), whose addiction biography made him one of the tragic heroes of jazz. The present recordings fall at the beginning of a period that lasted until Baker’s death and in which he was mainly in Europe. He moved restlessly from gig to gig. His discography reflects this unrest, as he was in the studios with constantly changing musicians. The German vibraphonist Wolfgang Lackerschmid was already a confidante of Baker. The idea of the ​​joint duo recordings made in January 1979 originated from meeting at a festival. Lackerschmid stayed with Baker for a while and at the end of the year the two of them joined together a second time in the studio, accompanied by guitarist Larry Coryell, another festival acquaintance. The group was completed by two first-class rhythmics, the bassist Buster and the drummer Tony Williams. With the exception of Baker himself, each of the players contributed their own composition, and the Jimmy Van Heusen number “Here’s That Rainy Day ” set a standard. Lackerschmid, Coryell and the two unrelated namesakes Buster and Tony must have hit it off right away and produced their own, elegant group sound with a cool fusion aesthetic, which has a very light-footed dance-like rhythm. And Baker? He played very useful to the group, as it were as a sideman who occasionally adds lyrical highlights to an already convincing music, whereby his tone is by no means lost, but rather looks downright solemn.

The American saxophonist Aaron Burnett is dedicating his new album to an astrological phenomenon, namely the encounter between the two planets Jupiter and Saturn, which approach each other roughly every 20 years. Together with Grammy winner Esperanza Spalding, he embarks on a musical journey into the extraterrestrial. Spalding returns the favor with her guest appearance on “Jupiter Conjunct” for Burnett’s saxophone playing on her last album “12 Little Spells”. The two musicians cannot be determined stylistically, so the result is also a fusion of classical, jazz, hip-hop, electro and world music. The backing band knows how to deal with the diversity of their leader, to take up his ideas and to process them improvisationally. Not easy fare, but inspiring and made to escape this world for a while.

‘A circle closes’
For Dave Brubeck’s centenary (1920–2012), takes from his most successful album and his last studio recordings have been released.
by George Modestin

—Although the pianist, composer and band leader Dave Brubeck, who died eight years ago at an old age, is not counted among the actual jazz pioneers, his sphere of activity was considerable. As a relatively late starter – during the war he had served as the leader of an army band in Europe and had met the alto saxophonist Paul Desmond – he formed a quartet in the early 1950s that would remain his standard formation. He toured the college landscape with the quartet and did a lot to promote jazz among the young, educated white bourgeoisie. His music was optimistic, elegant, and suited its time perfectly.
—The Brubeck – Desmond axis was completed in 1956 by drummer Joe Morello and in 1959 by bassist Eugene Wright (the latter had already been part of a tour through (Eastern) Europe and Asia organized by the US State Department the previous year), whereby Brubeck had found his “classic” cast. Wright was the only African American among the four and Brubeck clung to him in spite of resistance from the organizers.
—On several recording dates in 1959, the album “Time Out” was created, on which Brubeck experimented with odd meters and which – despite initially unfriendly reviews – blossomed into an audience success. “Take Five”, to which Paul Desmond contributed the melody, was the first jazz single ever to sell for a million copies, while by 1963 the entire album totaled half a million. The recording of the rhythmically intricate “Take Five”, which ran through in five-quarter time, was a “cramp”: one attempt followed the next because one of the participants kept stumbling rhythmically.
—For the 100th birthday of the leader, the Brubeck family is now releasing the “Time Outtakes” collection with unpublished runs from the original album. This selection – eight examples from over twelve hours of preserved material – acts like a time capsule that leads you back to the creation of one of the most popular albums in jazz history. This is especially true for the small, inconspicuous by-products of the studio sessions: For example, a jam by Brubeck, Wright and Morello over a six-quarter rhythm, on which the pianist plays more “bluesy” than almost anywhere else, or a compilation of studio chatter during which various themes and motifs are played.
—From Brubeck’s most successful studio album to his last: On “Lullabies” the very old man can be heard alone at the piano two years before his death, playing Brahms’ lullaby, some standards and a few original compositions in a wonderfully unpretentious, soulful and – one might say – mildly old-fashioned Way interpreted. Forgotten are the reservations about Brubeck’s rather “bulky” attack, which could be related to a surfing accident in 1951, as a result of which he had to struggle for a long time with complaints in both hands. On “Lullabies” technology, spirit and art unite to form a whole that touches you very directly.

Read the printed reviews in German in the January/February 2021 issue of Jazz ‘N’ More Magazine.