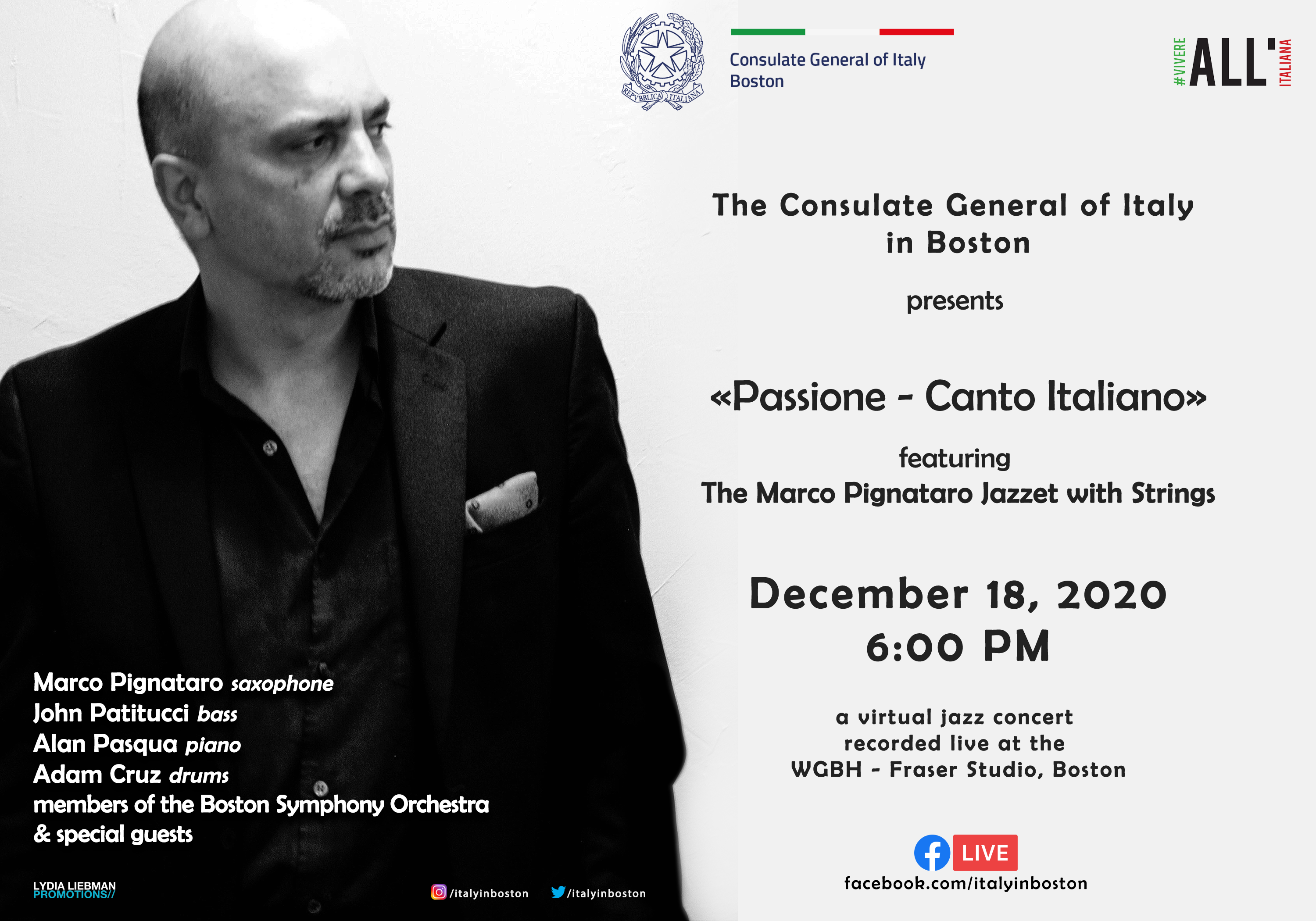 The Consulate General of Italy in Boston announces a special virtual concert titled “Passione – Canto Italiano” featuring the Marco Pignataro Jazzet with Strings + Special Guests. Mr. Pignataro is a renowned jazz player, saxophonist, composer, professor and co-director of the Berklee Global Jazz Institute at the Berklee College of Music. He will perform with famous international artists including legendary Italian American bassist John Patitucci, winner of four Grammy Awards. The jazz quartet will also feature virtuoso drummer Adam Cruz, and Alan Pasqua, a renowned piano player who has performed with music legends such as Bob Dylan, Santana and Tony Williams. This extraordinary jazz quartet will be accompanied by a string quartet composed by members of the prestigious Boston Symphony Orchestra. The virtual concert will be recorded live at the WGBH Fraser Performance Studio in Boston and will be broadcast on December 18th on the Consulate General of Italy in Boston Facebook page.

The concert will feature inspiring new arrangements of celebrated Italian music and Neapolitan classics commissioned exclusively for this special event. Featuring the unique fusion of traditional strings and jazz, famous Italian melodies will be performed in celebration of the great tradition of Italian culture and music.

The Consulate General of Italy in Boston embraces music as a tool to promote cultural diplomacy, which is the primary purpose of Vivere ALL’italiana, or “Living the Italian Way”, a campaign of the Italian Ministry of Foreign Affairs aimed at advancing Italy’s cultural heritage, creativity, innovation and lifestyle.

“The universal language of music has the power to bring people together and overcome cultural and language barriers. Music is deeply steeped in Italian culture, and through the centuries, the tradition of Italian music has unified humanity in times of joy and sorrow. No more has that been evident in the many examples of solidarity shown by the Italian people through song and music during the pandemic crisis”, stated the Consul General of Italy in Boston, Federica Sereni.

Dedicated to the local Italian community, this concert will call upon some family traditions from Mr. Pignataro’s own childhood. In preparation for the event, he reflects on listening to the “haunting melodies and poetic lyricism” of old Neapolitan Music in his household, thanks to his father. “Exploring its themes of passion, drama, unrequited or  hopeless love through the lenses of jazz & chamber music is the inspiration behind this project. I am beyond excited that this longtime dream of mine is now a reality with this concert,” Pignataro says.

Pignataro’s memories represent the kind of sentimental reflection that the Consulate aims to evoke from listeners and community members in attendance of the concert. Passione will be a celebration of the beauty that can come from artists merging their creative spirits in honor of a moment of reflection.