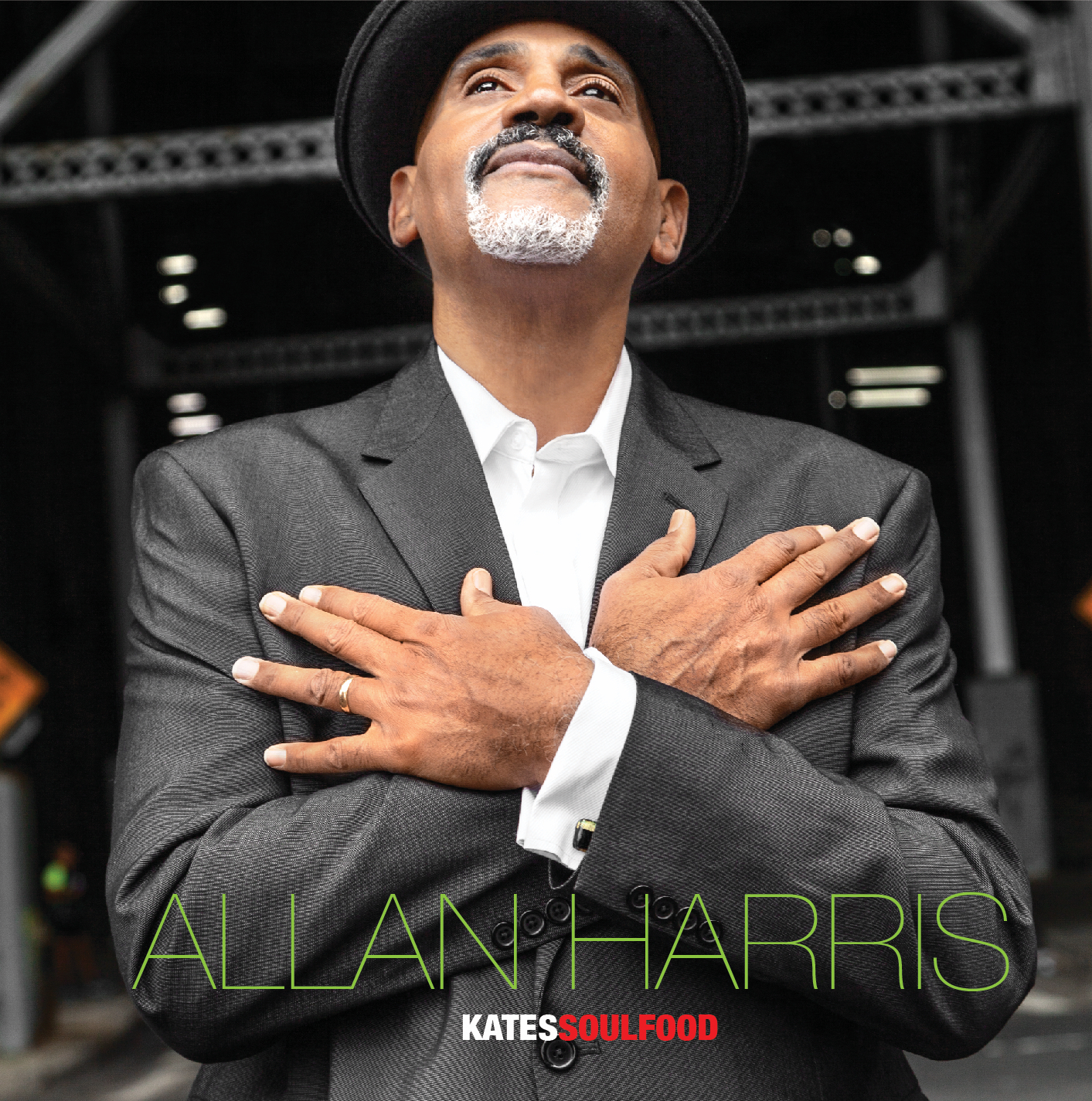 Renowned vocalist and guitarist Allan Harris is thrilled to announce the release of his long-awaited new studio recording Kate’s Soulfood. Available on February 12th, 2021 via Love Productions Records, Kates Soulfood is a spirited, soul-drenched ten track recording that pays homage to Harris’ home of Harlem, NYC as only he can. Harris will be embarking on a tour to support Kate’s Soulfood in February that will take him through North Carolina, South Carolina, Florida, Pennsylvania and Virginia.

Showcasing his brisk baritone and deft songwriting ability, Harris’ fourteenth release as a leader paints a vivid portrait of his vibrant neighborhood that draws heavily from a deep well of childhood memories. “As a child, the rhythmic rocking of the subway was music to my ears. Every Sunday I took a magical ride along those tracks from Brooklyn to Harlem, which became my island of refuge,” he says. Like his ancestors who emigrated there during the Harlem Renaissance, Harris saw Harlem as a place of opportunity, belonging, and most importantly, love. “The people that enveloped me with their love and teaching placed an armor of music, literature and history around my underdeveloped mind.” Kate’s Soulfood is the outcome of their heartfelt efforts.

Among those that had an impact on the young Harris was his Aunt Kate, and her popular luncheonette Kate’s Home Cooking. Located on the corner of Frederick Douglass Boulevard and 126th street, right behind the Apollo Theater, the diner was often frequented by musicians (and notably appears on the cover of Jimmy Smith’s Home Cookin’). Harris would spend his Sunday afternoons at his aunt’s restaurant, soaking in the sounds and sights, before catching a show at the Apollo. “I experienced many pivotal moments at my aunts’ restaurant. I witnessed parts of the civil rights movement, rubbed shoulders with exceptional people, and it was there that I really found my voice.” In composing the music featured on Kate’s Soulfood, Harris drew from these impactful experiences, and in doing so, has produced a wide-ranging sonic tapestry of his beloved neighborhood.

To bring his vision to life, Harris enlisted GRAMMY winning producer Kamau Kenyatta, known particularly for his work with Gregory Porter. Harris’ A-list backing band includes his working rhythm section made up of Arcoiris Sandoval on piano, Nimrod Speaks on bass and Shirazette Tinnin on drums. Also featured is Grégoire Maret on harmonica, David Castañeda on percussion, Curtis Taylor on trumpet, Alex Budman on alto saxophone, Keith Fiddmont on tenor saxophone and Ondre J Pivec on organ. Harris plays guitar throughout the album, with the exception of on “Color Of A Woman is Blu”, which features Tonga Ross-M’au in his place.

The contagious, vivacious energy of Harlem is personified on the opening track and album highlight “I Grew Up”, on which striking horn arrangements by Etienne Charles shine brightly. Against a backdrop of children playing and singing, Harris paints a vivid picture of an afternoon in Harlem, and proudly declares “Harlem is the place, Harlem is the place where I live,” perfectly setting the stage for the proceedings.

Harris shifts gears on “One More Notch (Put Down Your Gun)”, on which he steps into the role of a former gang-member who pleads with his junior to get off the street, and follows it up with “Wash Away My Sins”, a mid-tempoed declaration of appreciation for the strong women who love and support Black men in today’s broken society. Harris shines on neo-soul infused tracks “Open Up” and “Shallow Man” before barring his romantic soul on “The Color of a Woman is Blu”. The back-half of Kate’s Soulfood, “99 Miles”, “Autumn Has Found You”, and “New Day”, were written for Harris’ friends and family that showered him with love throughout his life.

Closing out Kate’s Soulfood is “Run Through America”, which was released as a single in August. Written in response to the unjust police killings of George Floyd, Breonna Taylor and Ahmaud Arbery, “Run Through America” is a modern-day protest song that ends the album with a call to action: to take to the streets and call out their name. The emotional music video was premiered by JazzTimes. It is a fitting end to an album about Harlem, a place where the civil rights movement boomed in the 1960’s – something Harris saw up close from his counter seat at Kate’s Home Cooking.

Kate’s Soulfood is a tour-de-force for Allan Harris, who has been called the “Jazz Vocal King of New York”. Described by the Miami Herald as possessing a voice with “the warmth of Tony Bennett, the bite and rhythmic sense of Sinatra, and the sly elegance of Nat ‘King’ Cole,” Harris has garnered wide acclaim from critics and legions of fans from all over the world. Recently, Harris made national headlines with his riveting work Cross That River, which tells the unsung story of America’s black cowboys and sheds light on their oft-overlooked contribution in taming the American West. Cross That River was featured in the New York Times, on NPR’s Weekend Edition, and on CBS and NBC.

Over the course of the COVID-19 pandemic, Harris has remained in the public eye due to his weekly live stream concert series “Harlem After Dark”. These virtual performances, which stream on Youtube and Facebook Live and garnered attention from Forbes, regularly attract thousands of fans and have become a staple in many music lovers’ homes every Tuesday evening. Harris has often featured tunes from Kate’s Soulfood during these performances, and the music has been met with great enthusiasm.

Harris will be bringing Kate’s Soulfood on tour this February.  This tour is made possible with the support of Jazz Road, a national initiative of South Arts, which is funded by the Doris Duke Charitable Foundation with additional support from The Andrew W. Mellon Foundation. The dates are as follows:

This project is funded in part by the Pathways To Jazz grant, a donor advised fund of the Boulder County Arts Alliance.