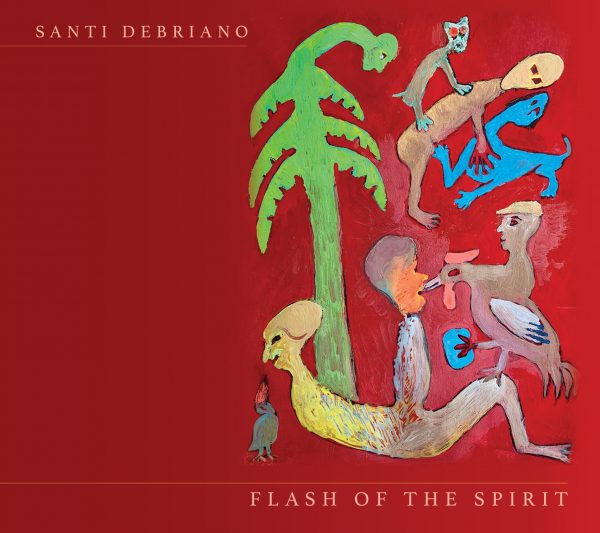 Much like his native Panama, which straddles the continental divide and facilitates the union of Pacific and Atlantic, Santi Debriano has become comfortable occupying several worlds at once. But, like the Panama Canal, it’s taken some work—extracurricular work, in Debriano’s case. As an ethnomusicology graduate student at Wesleyan University Debriano read Robert Farris Thompson’s Flash of the Spirit. For Debriano, a Black Panamanian American who’d grown up in New York City after his family emigrated from Panama when he was four, Thompson’s book proved revelatory, asking questions like: To what extent have African traditions and customs been retained by contemporary Black cultures throughout the Americas? “That book describes my ancestral struggle to stay present in the many worlds I live in,” says Debriano, “but also to never forget where I came from.”

It’s a tight rope that Debriano walks, but on his version of Flash of the Spirit, the always intellectually curious bandleader strikes the balance of a Wallenda in his prime. And he’s got plenty of help; his rhythm section’s rounded out by drummer Tommy Campbell, whom Debriano’s known since both were college students in Boston, playing in Stan Strickland’s band, Sundance, and pianist Bill O’Connell, who, like Debriano, performs with consummate fluency regardless of whether the gig’s led by Sonny Rollins or Mongo Santamaria. A small but powerful woodwind section includes alto saxophonist Justin Robinson and flutist Andrea Brachfeld. And complimenting the core quintet are Francisco Mela, a Cuban-born, raised and educated drummer known for collaborations with saxophonist Joe Lovano and pianist Chucho Valdés, Brazilian percussionist Valtinho Anastacio, a veteran of the genre-defying, Debriano-led ensemble Circlechant, and Tim Porter, an indispensable scholar and practitioner of the contemporary jazz mandolin.

There’s a lot here. It’s easy to get distracted—and understandable, because everything that does glitter here is, indeed, gold, from a listening standpoint. Between the reimagined— and sometimes totally reinvented— takes on tunes from Kenny Barron, Kenny Dorham, and Ornette Coleman, as well Debriano’s solo bass take on a standard popularized by Billie Holiday, the temptation might be to overlook Flash of the Spirit’s original compositions; doing so would be a mistake.

It’s a danger easily avoided by starting at the beginning, where Debriano’s “Awesome Blues,” a percussive hip-shaker in seven, leads things off. Driven hard by Debriano’s indefatigable bottom and bookended by beautiful and precise unison playing on the tune’s theme by Robinson and Brachfeld—which calls for and, in turn, receives response from Debriano’s bass—it’s a blues that lives up to its lofty billing.

In the two-hole is another Debriano original, “Funky New Dorp.” A smart groover with a deliciously Eastern-flavored head, this one again features beautifully controlled, precise and pitch-perfect unison playing by Robinson and Brachfeld and is a shout-out to Debriano’s Staten Island community, a tribute to how that neighborhood came together and supported one another during Hurricane Sandy in 2012. Brachfeld, a flutist mentored by giants like Jimmy Heath, Yusef Lateef and Eddie Daniels, lays down an expansive solo of a narrative quality; plot points and story arcs are exposed and resolved in under two minutes.

Debriano’s adventure in solo bass is next. On “For Heaven’s Sake,” he’s completely naked out there, so to speak, and with just his bass for cover channels, in turn, Lady Day and, on a sly little quote of “Round Midnight,” Monk.

For the next tune, Debriano increases the size of the band by 100%; O’Connell joins and together they combine for a duo’s take on O’Connell’s “Beneath the Surface.” As the song’s title suggests, there is a story to be told here, and Debriano’s bowed playing lends both pathos and pulpy suspense to the orchestration. Indeed, there’s a cinematic quality here, suggestive of a reckoning with something long buried and suddenly revealed.

The mood then quickly lightens “Toujours Petits,” a joyous, soul-nourishing piece written by Debriano for his three children that will fire up your neurological nostalgia centers and remind you of your capacity for deep, all-consuming love. And if you listen closely, you might make out Debriano’s slight doff of the cap to Jobim’s “Waters of March.”

The final two Debriano compositions are “Ripty Boom” and “Natural Causes.” The former is a blues in six with a bit of a hard-boiled, noirish feel. Very cool. Brachfeld, once more, offers a soaring solo before ceding her time to Robinson, whose show of athleticism impressively manages to marvel without ever straying outside the tune’s melodic frame. The latter sees drummer Tommy Campbell deftly navigating subtle time changes, while Robinson lays down another solo, where, at times, his playing takes on distinct tenor-like qualities. Anastacio’s presence on berimbau and congas, as on “Toujours Petits,” adds seasoning in just the right measure, while gorgeous unison playing—this time between Brachfeld and Debriano, while Robinson plays a harmony line—continues to be a hallmark of this recording.

Robinson merges back into the melody line, joining O’Connell, Debriano, and Brachfeld in stating the theme of Ornette Coleman’s “Humpty Dumpty,” a composition Debriano considers Coleman’s “most tuneful.” Between collective statements of the theme is where the album’s free jazz moment occurs, mirroring the type of disorientation the song’s titular character must have felt while experiencing his great fall.

Flash of the Spirit closes with tunes composed by two Kennys: Dorham and Barron. Dorham’s “La Mesha,” originally a ballad written for Joe Henderson’s Page One (1963), is the album’s one true hard-bop ballad. And in the tradition of tunes like Coltrane’s “Naima” and Shorter’s “Infant Eyes,” Robinson, though in just a supporting role, delivers with facility and emotional depth. Meanwhile, Debriano overdubs on electric guitar here with playing that’s clean and soulful.

As the pièce de résistance, Brachfeld and Debriano introduce and reprise, in unison, the iconic theme of the album’s closer in a way you almost certainly haven’t heard before: It’s a piano-less version of piano legend Kenny Barron’s “Voyage,” with the drums kicking out an Afro-Cuban songo rhythm.

This tune, this record, is exactly how a musician like Debriano reconciles the dilemma of feeling tied to several worlds and artistic traditions at once. Because it shows everyone in all of those communities—from Brooklyn to Staten Island to the Black communities of Panama—Debriano’s essence; it is the flash of his spirit.