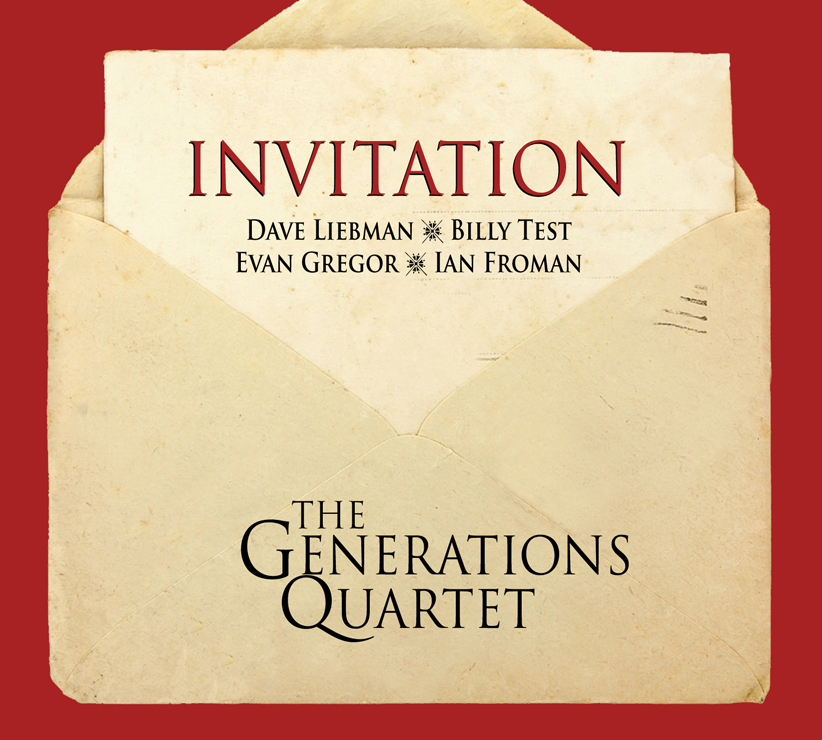 Built upon mentorship, continuity, and three different generations conversing in the foundational language of jazz—the standards—Invitation is yet another example of music’s power to unify.

Liebman, whose reputation as a live performer and recording artist may be eclipsed only by his bona fides as an educator, plays both soprano and tenor saxophone here with three musicians who’ve become professionals due, in no small part, to his guidance: Ian Froman (drums), Evan Gregor (bass), and Billy Test (piano).

The shared lineage here goes all the way back to Miles Davis and John Coltrane. Liebman played with Miles and also with Elvin Jones, the drummer of what would come to be known as Coltrane’s Classic Quartet.

Ian Froman, the drummer here, later studied under Elvin Jones and, soon after, formed a working relationship with Liebman that’s lasted over 30 years now. Describing their relationship Froman said, “Lieb has been like a musical father to me.”

Froman, an educator himself, has paid those lessons forward to students at Berklee College of Music, where, among his students, was Generations Quartet bassist Evan Gregor, who arrived at Berklee already well versed in Liebman-style pedagogy.

Gregor grew up near Liebman’s Pocono-area home, but he didn’t always have designs on becoming a musician. He was thinking more along the lines of computer science—that was before Liebman introduced him to jazz. One of the first live shows Gregor ever saw featured Liebman and Froman playing together. Said Gregor about the musical foundation laid by Liebman that led to Berklee and teachers like Froman, “Dave Liebman is largely responsible for me being a musician.”

Learn enough about Dave Liebman and you realize mentorship isn’t just a job, it’s a way of life.

Invitation’s pianist, Billy Test, is the youngest branch to sprout from this fertile tree; Test studied with Liebman while pursuing his Master’s at Manhattan School of Music, first played with Gregor in a Liebman-led band in 2015, and, shortly after, began playing gigs with both Gregor and Froman.

The only thing left was to remediate a curious oversight: though each had played with the others in various permutations, all four musicians—all three generations—had never shared a stage.

The stage that made the most sense to share was the one at the Deer Head Inn, the longtime ground zero of a formidable, if under-the-radar, Poconos (Pa.) jazz scene that giants like Phil Woods and Bob Dorough, along with Liebman, led for years.

The Generations Quartet’s natural energy and easy chemistry was apparent from the opening set’s downbeat. Those early gigs at the Deer Head became the impetus for Invitation, a collection of American Songbook standards artfully interpreted, along with covers of compositions from immortals like Coltrane and Herbie Hancock.

The tunes are familiar, and that’s the point.

In other segments of society, generations talk past each other to the point where it seems they’re not even speaking the same language. Jazz, where so much of the shared language is rooted in the standards, doesn’t allow for that. On Invitation, the Generations Quartet speaks that timeless and indispensable language with a single, mellifluous voice.

But the cohesion doesn’t come at the expense of individuality.

On Invitation’s opener, a bold take on the masterful Hancock composition “Maiden Voyage,” Liebman is at once commanding and light on soprano saxophone, showing great technique and imagination when stepping off-piste and challenging the upper reaches of his instrument, aided and abetted by Froman’s percussive prodding.

Jazz fans won’t need long to place the next tune. Test’s introduction to “Bye Bye Blackbird” pays homage to Red Garland’s iconic overture to the standard on Miles Davis’s Round About Midnight. Liebman once again wields the soprano and, from his first passages here, one gets the sense that he’s out to explore, and test, the traditional boundaries of the tune. Test is granted extended time out front—and the young man passes with plenty of room to spare, room which Liebman gladly accepts for a second soaring solo, where, in the midst of his musical reverie, he can be heard playfully quoting Leonard Bernstein.

The title track, a tune originally composed by Bronislaw Kaper, whose writing credits also include “On Green Dolphin Street,” is the first of two cuts most closely associated with perhaps Liebman’s greatest musical influence, John Coltrane.

On “Invitation,” Liebman, again on soprano, is given a wide berth from the outset, thanks in no small measure to the rocksteady backing from Gregor and Froman, who are particularly simpatico here.

“Village Blues,” a tune that debuted on Coltrane’s 1961 release Coltrane Jazz, is presented here as though it were the product of a recently downed espresso—it’s quicker, more percussive, more angular and altogether less loping than the smoky and deliberate original.

The quartet’s take on Weill and Nash’s “Speak Low” may be the slickest and swinging-est arrangement here, bookended cleverly by nods to Miles Davis’s “Milestones.” Liebman’s back on tenor and Froman’s at his propulsive best, driving the soloists (Liebman and Test) to new heights.

But the cut most meaningful to the guys may be the closer, a fiery rendition of “You and the Night and the Music,” recorded live at the Deer Head Inn. It’s Invitation’s lone live cut and you can sense that little something extra that a live audience brings to a band. You can feel it in the controlled aggression of Liebman’s tenor and in the bounce of Gregor’s walking basslines.