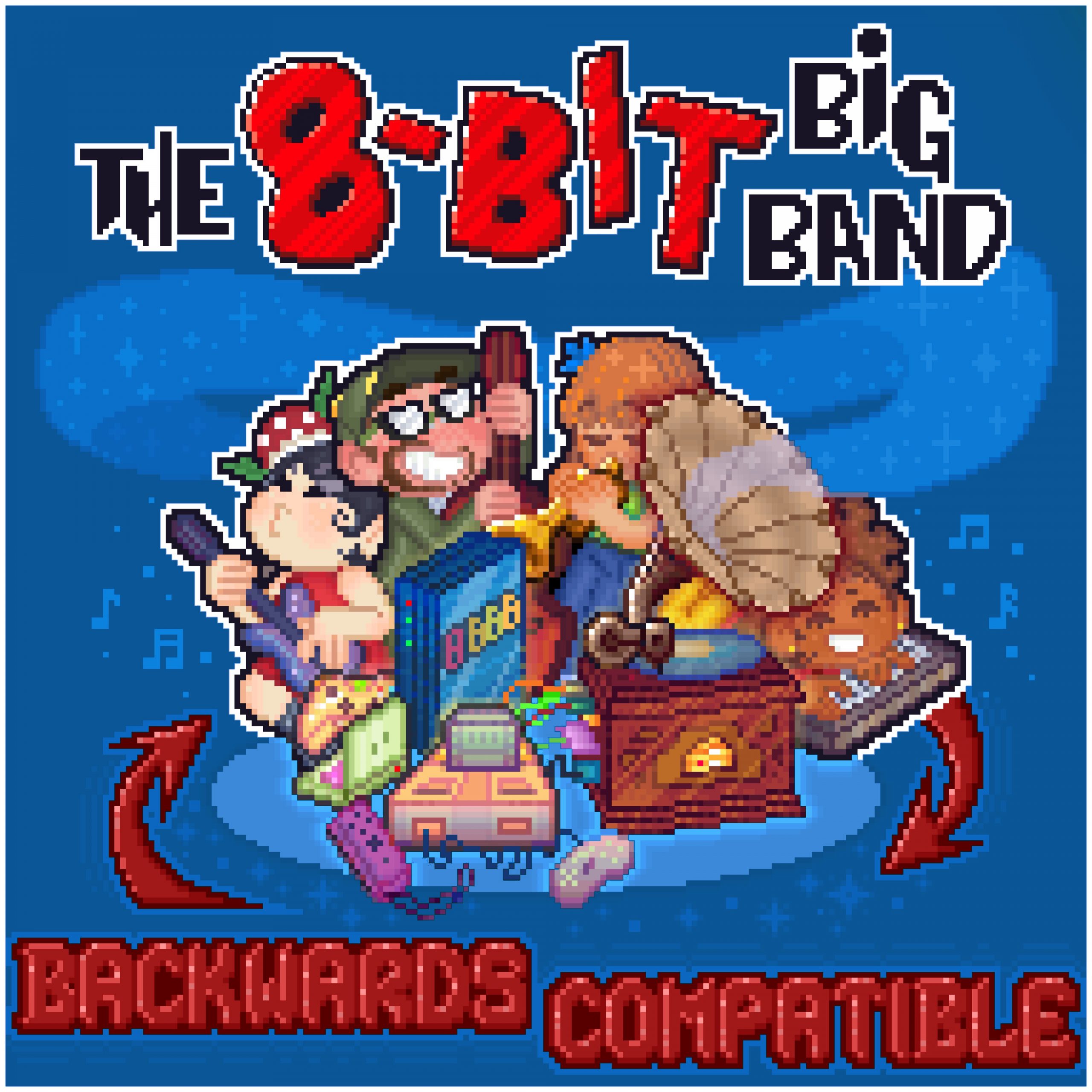 The 8-Bit Big Band is thrilled to explore the “Great Video Game Songbook” with the release of their electrifying new album Backwards Compatible on January 8th, 2021. Their third full length release, Backwards Compatible expands this ever growing contemporary body of music with a symphonic orchestra made up of over 70 of New York City’s finest musicians. Musical Director and newly minted Tony nominee Charlie Rosen arranged and produced the project’s 13 imaginative renditions of some of the world’s most popular video game music.

Special guests include Grace Kelly, Adam Neely, Benny Benack III, Leo P., Zac Zinger, Sam Dillon, Steven Feifke, Andrew Gould, Tiffany Mann, and the vocal sextet Accent. Backwards Compatible was mixed by GRAMMY award winning engineer John Kilgore, and mastered by engineering veteran Alan Silverman, who has worked on more than 80 GRAMMY nominated or winning albums throughout his career. Backwards Compatible features a winning musical combination: melodies that are instantly recognizable to anyone who has ever traversed through immersive game worlds, and dazzling arrangements, with impeccable musicianship that will appeal to music lovers across the board.

Since its inception in 2017, the 8-Bit Big Band has become a viral sensation. Their fully produced music videos, regularly uploaded to their YouTube channel, has aggregated over 9 Million views, and over 200,000 subscribers, followers, and listeners across the globe, selling out large-scale concert venues in New York City and Boston to date. The ensemble was founded by Charlie Rosen, who at the age of 30, already has 11 Broadway shows, and countless Off-Broadway and regional productions under his belt. A man of many talents, Rosen has worn the musical hats of arranger, orchestrator, music director, pit musician, and music supervisor. This year, he received his first Tony Award nomination – for his orchestrating work on the Broadway production Moulin Rouge.

He has long seen video game music as the perfect vehicle to reach a broader audience, and introduce listeners to the jazz artform. With over 1.2 billion gamers in the world, Rosen surely has a point. “As a lifelong gamer who also grew up listening to the best in orchestral and big band music, I see the music of many video games as musically equivalent to other great works of music set to media such as film scores and broadway shows,” said Rosen last year ahead of their sold out concert at Sony Hall earlier this year. “Many carry the same quality of melody and composition when it comes to quality, scope, and emotional appeal for audiences. The crowd reaction when we play our versions of themes from favorites such as Mario, Tetris, and Legend of Zelda is overwhelming, not just because it’s amazing music on its own, but also because of the strong memories and nostalgia evoked in an audience that played these games throughout childhood. I truly believe that video game music deserves to be included in a ‘New American Songbook,’ just like classic film and Broadway music has been canonized by the Golden Age American Songbook.” In a 2019 New York Times feature, journalist Elizabeth Harris notes “Mr. Rosen exists as a sort of bridge between genres and generations, embracing Broadway standards, pop songs and the music of Tetris.”

Backwards Compatible explores musical selections that were prominently featured in iconic video games without sacrificing one iota of the band’s focus on stunning musicality.  This awe-inspiring release begins with “The Chrono Trigger Main Theme”, a reimagined arrangement of the theme from the 1995 game Chrono Trigger.  Taking a nod from the Jaco Pastorius track “Kuru/Speak Like a Child”, the album begins with improvised lines from all of the players growing into an expansive soundscape featuring pianist Steven Feifke blazing through this tribute to electric big band jazz fusion.  Featuring the vibrant Grace Kelly on alto sax, the band tackles a Tower of Power inspired funk arrangement of “Hydrocity Zone” from Sonic the Hedgehog 3 (1994).

Featuring celebrated vocalist and trumpeter Benny Bennack III crooning in the style of Frank Sinatra and soloing on trumpet, the band gives a rousing rendition of “Want You Gone” from the popular game Portal 2 (2011).  The band displays its virtuosity in a powerful Arabic-tinged, metal-infused jazz fusion performance of “Super Mario Land Underground” from Super Mario Land (1989) with a boundary pushing performance on the baritone sax by the inimitable Leo P.

Rosen demonstrates his stellar musicianship on the bass with a Jaco-inspired introduction and melody to the popular soundtrack selection “Dire Dire Docks” from Super Mario 64 (1996).  Zac Zinger is featured on the EWI in a smooth big band rendition of “Birdman” from the game Pilot Wings 64 (1996).  This lush arrangement is followed by a mesmerising performance by vocal jazz sextet Accent on a contemporary jazz version of “Lost in Thoughts All Alone” from Fire Emblem: Fates (2015).

Bass player and composer Adam Neely is featured as a soloist on a nimble orchestral jazz arrangement of the game music standard “Saria’s Song” from The Legend of Zelda Ocarina of Time (1998), which is followed by a dazzlingly dynamic and powerful vocal performance from the amazing Tiffany Mann on the James Bond inspired “Snake Eater” from Metal Gear Solid 3 (2004).  To take us into the end of our journey,  Grace Kelly delivers an uplifting and jubilant take on the new modern game music hit “Jump Up Super Star” from Super Mario Odyssey (2017), followed by a farewell from the band with a classic swing big band take on the “End Theme from Super Mario World” (1990).

In the words of Charlie Rosen, “This album was born as a collaboration between a collection of some of the most creative, talented, and open-hearted artists and musicians that gathered together to showcase that when performed with heart and skill, Video Game Music deserves to take its place alongside other legendary bodies of musical work. We hope you enjoy listening as much as we did creating, and long live Video Game Music!”