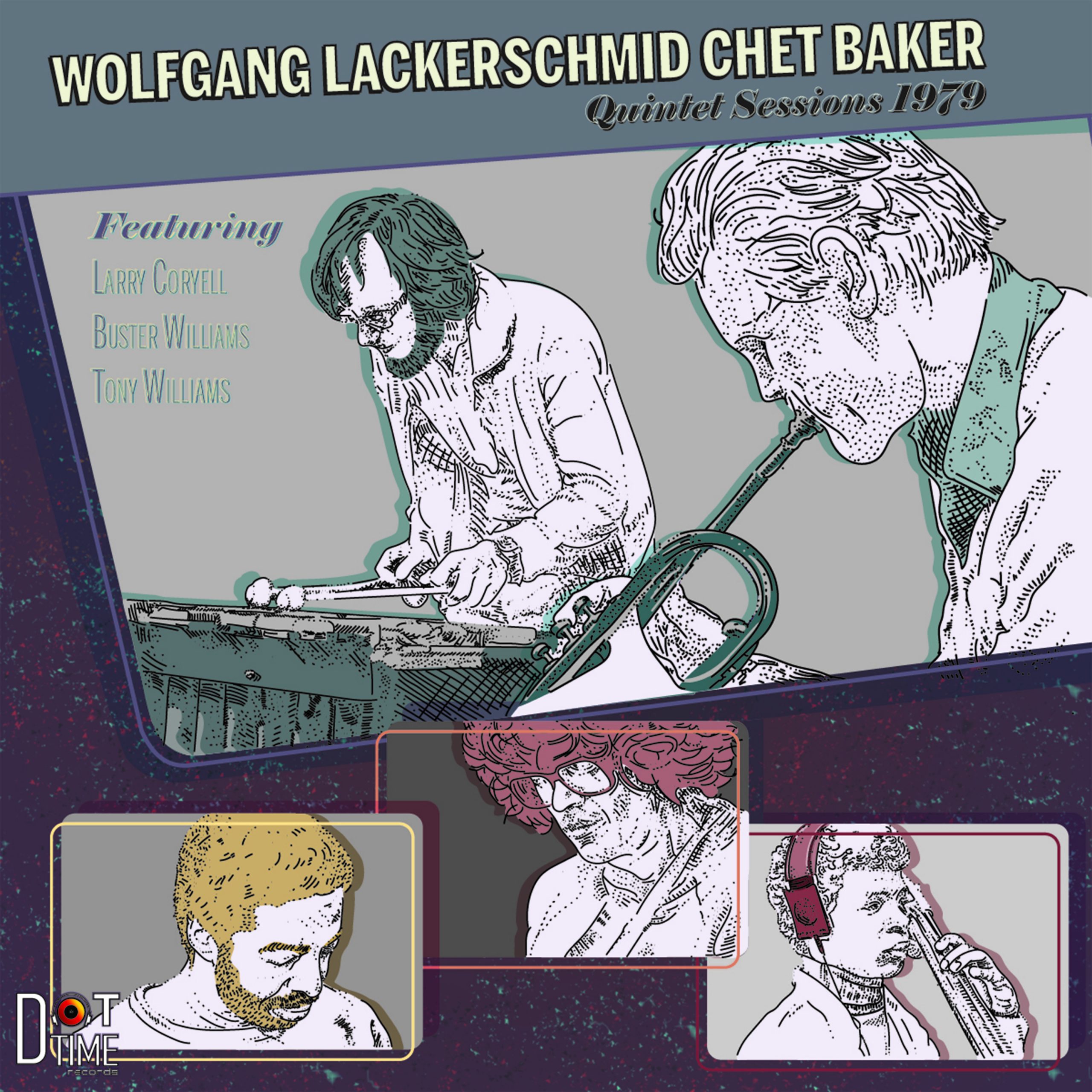 Dot Time Records is thrilled to announce the November 13th release (CD/digital) of Lackerschmid/Baker: Quintet Session 1979 (vinyl release: January 8th, 2020).  ‘Quintet Session’ is the follow-up to Dot Time’s critically acclaimed re-release of Wolfgang Lackerschmid and Chet Baker’s Ballads For Two.  A continuation of Lackerschmid’s great adventure with one of the most prodigious trumpet players in the history of the art form, the album features the spirited duo of iconic trumpeter and vocalist Chet Baker and vibraphonist Wolfgang Lackerschmid alongside a stellar rhythm section made up of jazz luminaries Larry Coryell (guitar), Buster Williams (bass) and Tony Williams (drums).

The archival vaults have been reopened by Dot Time Records after the widespread success of Wolfgang Lackerschmid and Chet Baker’s Ballads For Two.  JazzTimes noted “Serenity permeates [Ballads For Two], a serenity born of internal logic that feels both welcome and foreign”.  Quintet Session offers a distinctly different lens through which to hear these fine musicians coalesce.  With two tracks that have never been publicly released and a unique CD/Vinyl package presentation, this material displays the stunning musicianship and compositional prowess that each of these five leaders have along with their instruments.

The year was 1979, Lackerschmid and Baker had traveled by train and ferry from Norway to Austria to perform at a festival engagement following the success of the limited release of Ballads for Two.  Following a particularly memorable duo performance, guitarist Larry Coryell came backstage with tears in his eyes.  Moved by the performance, he remarked that he would love to join the duo some time.  Baker’s agent picked up on this right away, suggesting that the three artists do a record together with a rhythm section.  This suggestion was met with a gruff response from Baker: “We don’t need no rhythm section.”  Lackerschmid followed up remarking, in a half-joking fashion, that the only rhythm section players that he would trust on the project both have the last name “Williams”.  Some weeks later, Lackerschmid received a call from Chet’s agent stating “Buster and Tony are excited to play at this recording session.”  Thus an off-the-cuff comment sparked the collaboration between five of the most impactful musicians in the jazz idiom.

Larry, Buster and Tony eagerly arrived in Stuttgart for the recording session, each with compositions of their own.  ‘Quintet Session’ starts full-swing with Tony Williams’ “Mr. Biko”.  Lackerschmid notes “[the tune] created a great atmosphere with various colors, connecting the different musical flavors of the players in a very elegant way.”  Coryell, Baker, Lackerschmid and Buster Williams all bring something unique and powerful to the piece during inspired improvisational segments.  Lackerschmid’s “Balzwalz” brings the ensemble to full-swing.  “Balzen” is the German expression for courtship, which could explain the nearly-imposing bassline from Buster Williams and the passionate bluesy playing from guitarist Larry Coryell leading to an instinctual growl from the rhythm section (at the 1:40 mark).  Baker’s voice and melodic acuity sounds in wonderful form scatting over the tune’s changes.  On an alternate take, which is included in this CD/Vinyl package, you can hear Chet playing trumpet beautifully over the changes instead of scatting.

Coryell brought in “The Latin One”, a bright-tempoed Latin inspired piece of his pen.  During his solo, the guitarist decided to switch to another piece he had written “Rue Gregoire Du Tour”.  Lackerschmid notes “because the mood of “The Latin One” had started out so nice, we kept those two minutes and faded at Larry’s solo before he stopped.”  Baker shines on “Rue Gregoire Du Tour” delivering a virtuosic solo wrought with melodic intrigue.  The album concludes with an energetic blues “Toku Du”.  Baker and Coryell demonstrate their bop vocabulary and marvelous time feel over Tony Williams’ primordial, synaptic rhythmic underpinnings.  Buster Williams delivers several lively choruses before Lackerschmid closes the tune out with some marvelous, soulful melodic invention, accompanied ardently by Coryell.

Forty years after the remarkable recording session that spawned this release, Dot Time Records’ Legends Series is ecstatic to offer audiences another snapshot of the vitality of the jazz scene of yesteryear with this stunning document of a coalescence of five icons that shaped the jazz idiom over the course of their extensive careers.