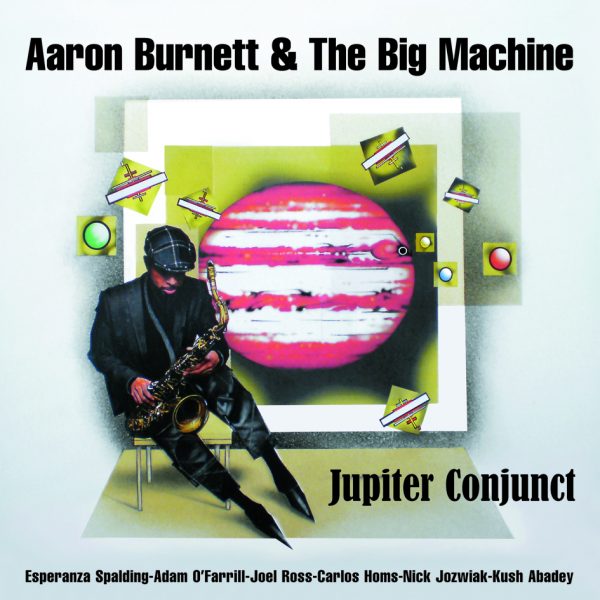 While Burnett established himself professionally by touring the world with Esperanza Spalding, his ambitions have always been a little out of this world. On Jupiter Conjunct, the follow-up to 2019’s critically acclaimed Anomaly, Burnett and the Big Machine have expanded their horizons to transcend the terrestrial. Inspired by the solar system’s largest planet, its orbiting moons, and the cosmic forces that somehow prevent celestial bodies from careening off into oblivion, Burnett’s nine compositions reflect his notion that sound and music serve as comparable unifying and all-connecting forces.

“Jupiter Conjunct,” Burnett says, “is a testament to my admiration of our creator and the connection to all through sound.”

Revolving around Burnett, the Big Machine’s lodestar, are Adam O’Farrill on trumpet, Joel Ross on vibraphone, Carlos Homs on the piano and Fender Rhodes electric piano, Nick Jozwiak on bass, and Kush Abadey on drums. They are not so much genre-defying as genre-expanding, a band that reflects its leader’s multiple influences by adorning a foundation rooted in classical and jazz with elements of contemporary electronic and world music.

Intrepidly exploring these new frontiers is made easier when among your guides to the galaxy is one of the universe’s brightest stars, Esperanza Spalding. Burnett has toured and performed with the four-time Grammy winner in over 40 countries and was featured on her latest Grammy-winner, 12 Little Spells. Spalding is happy to return the favor here, lending her improvisational singularity to “Ganymede,” a tune that speaks directly to the idea that much of hip-hop is an evolution of conversations started by jazz. Scatting in unison with Burnett’s searching and complex lines on tenor saxophone, Spalding is an extension of Burnett’s horn, and his horn is an extension of her voice. Meanwhile, Jozwiak and Abadey are the rhythmic dark matter holding this explosive tune, an incredibly intricate composition, together. Abadey, especially, is spectacular, a Questlove-like percussive supernova.

“Ganymede” is just the first of four cuts named for Jupiter’s Galilean moons. Burnett has dedicated the second, “Callisto,” named for the gas giant’s outermost and second-largest moon, to Wayne Shorter, the groundbreaking saxophonist and fusion pioneer whom Burnett has long admired for both his mastery of the instrument and compositional technique. With a trap-inspired beat and fluid but darkly-hued harmonic interplay between Burnett and O’Farrill, “Callisto,” enters rarefied air by simultaneously evoking images of Southern hip-hop and film noir, the tune’s narrative quality underpinned by the hard-boiled, purpose-driven sound of Jowziak’s runs on bass.

The next tune, “Io,” named for Jupiter’s innermost and most volcanically active moon, is, like its namesake, molten to the core. At just a shade under four minutes, this one burns hot and fast, showcasing an incendiary vibes solo from Joel Ross and a rhythm section that never loses the thread on Burnett’s seemingly limitless ideas.

“Ether” most prominently brings Burnett’s electronic dance music influences to bear, with recursive, almost hypnotic, riffs and rhythms. Straddling that line between composed and frenetic, this one speaks to the seemingly tenuous yet ultimately sturdy forces that somehow keep the universe, and all the things in it, from coming unglued. The tireless Abadey, once again, must be heard to be believed, playing with incredible precision at warp speeds, while Burnett and O’Farrill are like two planets with wide elliptical orbits around the same star. Sometimes they’re in close for tightly arranged pairs playing; other times they’re entities unto themselves, boldly freelancing in the deep.

“Europa,” too, is inspired by the EDM universe (a world he’s known in due to his work with his group Sistine Criminals), demonstrating that Burnett plays almost equally well with synthetic life forms as with fully organic ones, a quality integral to the success of any would-be traveler to Jupiter’s smallest moon.

Jupiter Conjunct’s opening two tunes, “Color Durations” and “The Veil,” among the album’s most orchestral-sounding offerings, are cautiously eager, like space travelers leaving the cocoon of their ship and making that first venture out into an alien world. Meanwhile, by the time we come to “Ace of Swords,” the record’s sixth track, we’re at a much different part of the album’s narrative arc; a clear-headed, radiant positivity reigns supreme on this medium-tempo groover, buoyed by an especially ethereal solo from Homs on the Fender Rhodes.

Because there’s no such thing as too much Esperanza Spalding, Jupiter Conjunct closes with an alternate take on “Ganymede,” perhaps the tune that best synthesizes—from jazz to hip-hip to electronica—the album’s principal influences.

With its myriad influences, Jupiter Conjunct doesn’t always fit neatly into narrowly defined conceptions of what jazz is and should sound like, but in broadening the scope of what jazz is and can be, Burnett’s captured the essence of what jazz has always been: perpetually innovative, never static. Like Galileo all those centuries ago who noticed moons orbiting Jupiter, lending credence to what a guy named Copernicus had theorized a century earlier—maybe the Earth wasn’t the center of the universe after all.

All tracks composed by Aaron Burnett