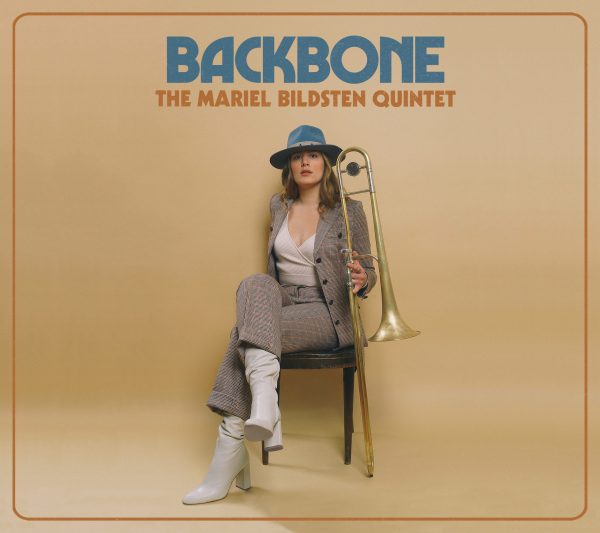 Outside in Music is proud to present Backbone, the debut release from NYC-based trombonist and bandleader Mariel Bildsten. In the revered company of Stacy Dillard (saxophones), Sean Mason (piano), Ben Wolfe (bass) and Evan Sherman (drums, co-producer) as well as guest percussionist Keisel Jimenez, Mariel Bildsten presents her unique interpretations of classic gems, each of which she has discovered throughout her years of playing and living within the New York City jazz circuit. Comprising inventive and dynamic rearrangements of compositions from the likes of Horace Silver, Kenny Dorham, Duke Ellington, Peter De Rose and Bert Shefter, Backbone chronicles the sheer range of musical influences that Mariel Bildsten uncompromisingly embodies as a leading jazz contemporary.

Horace Silver’s “Ecaroh” boisterously kicks off proceedings. Featuring solos from Bildsten on trombone, Stacy Dillard on soprano saxophone and Sean Mason on piano, the opening track emanates spontaneity and swing. The track’s intro and outro sections were derived from the legendary pianist’s original solo. A stand-out track from the album is “Rosita”, originally written for the 1923 Ernst Lubitsch-directed silent film of the same name. Although composed by Paul Dupont, with lyrics by Allan Stuart, it was the 1959 take by Coleman Hawkins and Ben Webster that first captured Bildsten’s attention. Rosita, the film, tells the dramatic story of a Spanish street performer named Rosita (played by Mary Pickford), who writes songs in which she insults the king. In the process of chastising her, the king falls in love with Rosita and, feeling threatened, arrests and attempts to execute her lover. The film reveals a complicated love triangle between peasant woman, king, and lover. Inspired by the tale’s telling of the king’s seduction upon Rosita’s first visit to the castle, Mariel Bildsten treats listeners to a sultry bolero, featuring Stacy Dillard on tenor saxophone.

Backbone draws to a close with “The Lamp is Low,” originally written by Peter DeRose and Bert Shefter. Paying homage to the fact that this composition was adapted from Maurice Ravel’s “Pavane,” the trombonist and bandleader wrote an intro section, based on Ravel’s melody. Featuring Cuban percussionist Keisel Jimenez on conga and guiro, this Latin rearrangement leaves listeners uplifted and cheerful. It’s worth noting too, that Mariel first heard this composition in a typical late-night NYC setting – a performance by the late, great Roy Hargrove at Small’s Jazz Club on a Tuesday morning at 3am. This closing track serves as an apropo nod to the city that continues to inspire and influence this up-and-coming bandleader.

Following a week-long run at Dizzy’s Club Coca-Cola in New York City, Backbone was recorded in just one night at Sear Sound Studios, NYC in January 2019. Throughout the recording sessions, Bildsten strived to showcase and illuminate the individuality, courage, strength and uncompromising character of this band – in other words, its backbone. From Stacy Dillard’s playfulness and creativity and Sean Mason’s originality and soulfulness to Evan Sherman’s daring spirit and Ben Wolfe’s inventiveness, this ensemble collectively displays a tenacious and exuberant spirit. In delivering this music, Mariel Bildsten hopes to set the scene for fans to live, dance, and romance. The trombonist, who is inspired by the likes of J.J. Johnson, Curtis Fuller, and Lawrence Brown, elaborates: “I’m imagining taking the subway and bopping my head to ‘Ecaroh,’ ‘The Man Who Got Away,’ and ‘Monaco,’ unwinding after a long day with someone I love to ‘Mood Indigo’ and ‘Rosita,’ and throwing open the windows on a bright sunny day and dancing to ‘The Lamp is Low.’