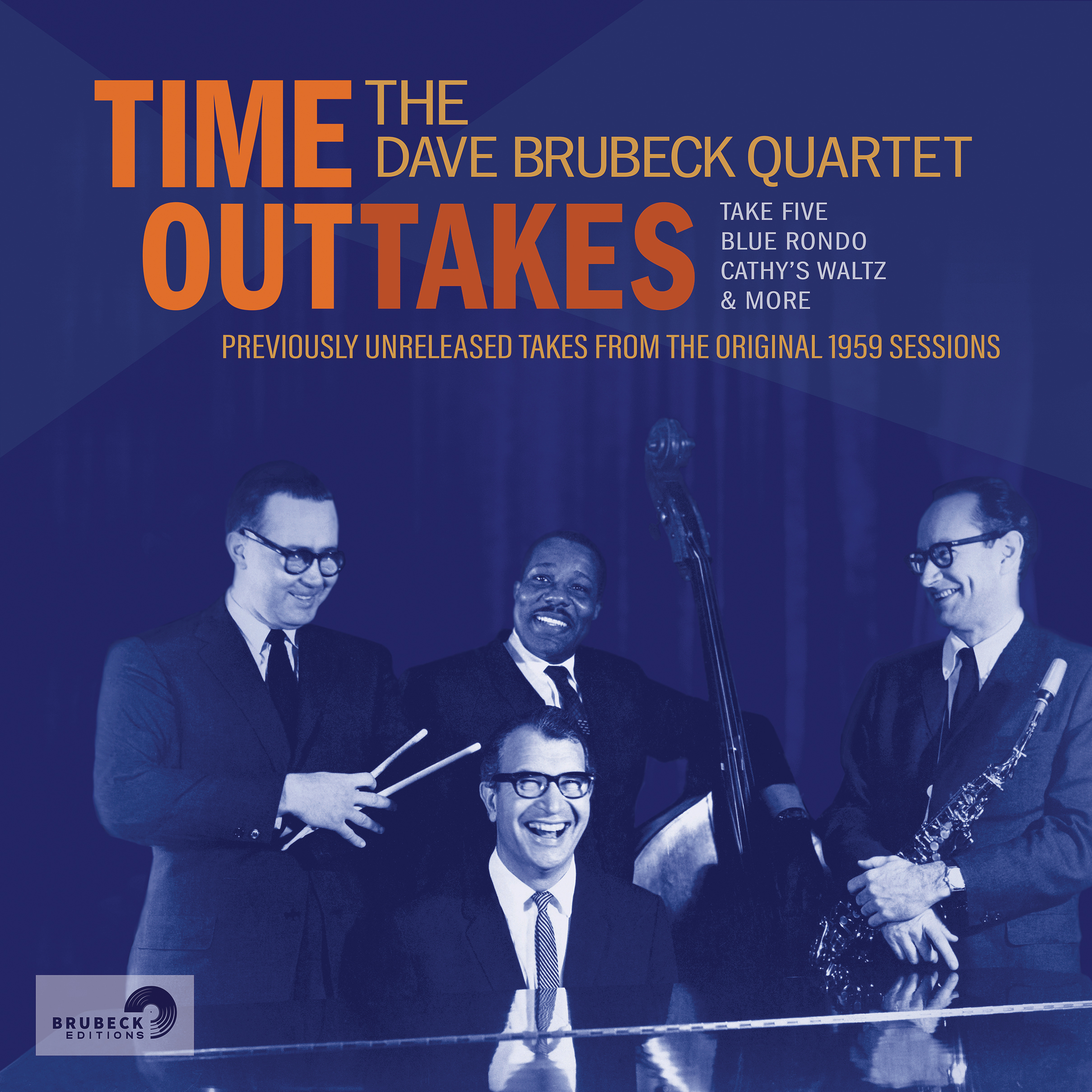 The Momentous Release of Time OutTakes,

The First Release from Their Label Brubeck Editions

Time OutTakes Features a Collection of Newly Discovered Outtakes from

Available via Brubeck Editions on December 4, 2020

Listen to “Take Five” via RollingStone.com

Brubeck Editions is delighted to announce the December 4, 2020 release of Time OutTakes.  The label’s inaugural release, timed to celebrate Dave Brubeck’s centennial, features recently discovered outtakes from The Dave Brubeck Quartet’s historic 1959 Time Out sessions.  Brubeck Editions was created by the Brubeck family for the release of officially authorized music by the late musical innovator and American original, Dave Brubeck and his many musical collaborators.  Time OutTakes offers listeners insights into the recording process behind one of the most significant and popular jazz recordings of all time.  Time OutTakes features the innovative pianist and composer Dave Brubeck with his iconic quartet; lyrical alto saxophonist and composer Paul Desmond;  and the steadfast rhythm section of bassist Eugene Wright and drummer Joe Morello who energize each enthralling track.

Designated a “Living Legend” by the Library of Congress, Dave Brubeck’s storied life is documented by hundreds of celebrated recordings.  1954’s Jazz Goes to College introduced the artform to a widespread new audience; 1961’s Bernstein Plays Brubeck Plays Bernstein marked a beautiful collaboration that set a precedent for the integration of jazz and classical stylings.  1962’s The Real Ambassadors sees a landmark collaboration between Brubeck and Louis Armstrong.  However, there is no release quite as pivotal in the discography of Dave Brubeck and perhaps in the greater pantheon of jazz recordings as a whole than 1959’s Time Out.  Time Out captures Brubeck and his quartet at a point of peak artistic excellence and exploration.  Experimenting with odd time signatures, improvised counterpoint, polyrhythm and polytonality, Brubeck retained a soulful and playful nature to his music that audiences everywhere were fascinated and excited by.

Time Out became the first jazz album to sell over a million copies and “Blue Rondo a la Turk” and the quintessential Desmond-composed and Brubeck-arranged classic “Take Five” (now in the Grammy Hall of Fame) began to appear on jukeboxes throughout the world, propelling Brubeck’s name to one that signified exploratory innovation, deep appreciation for disparate music cultures and a fresh, exciting new sound in jazz music.

Brubeck Editions’ release of Time OutTakes furthers the legacy of these hallmark sessions and the iconic composer and bandleader on the centennial of his birth.  The family learned of the existence of the raw tapes of the Time Out sessions while being interviewed for several biographies that were released as a part of Brubeck’s centennial celebration after the authors had located the audio in Brubeck’s archives.  Chris Brubeck notes “During an English tour by Brubecks Play Brubeck (Darius on piano, me on bass and trombone, Dan on drums and Dave O’Higgins on saxophones) we listened to hours of music that never made it onto the final Time Out LP.  These undiscovered performances were a thrilling revelation! The interaction of these immensely talented musicians created incredible music but we also could hear that they actually DID make mistakes sometimes.  They were having a challenging time playing this new tune in 5/4 that would eventually become the worldwide hit “Take Five.”  We heard a beautiful take of “Cathy’s Waltz” that was arguably better than the take that went on Time Out.  The more we listened, the more we smiled as we were transported through time by the melodic lyricism of Paul Desmond, the intense swing and technical brilliance of Joe Morello, the deep, dependable bass grooves laid down by Gene Wright and the undeniable inventiveness of our father’s piano prowess — polytonal, polyrhythmic, swinging and playful. His compositions were fresh, the odd time signatures “game-changing” and his tunes served as a springboard for innovative solos.”

Time OutTakes begins with the rollicking refrains of “Blue Rondo á la Turk”.  Pianist Darius Brubeck indicates “The Columbia ‘Blue Rondo’ picked itself on the basis of fewer mistakes, but here on Time OutTakes, Paul and Dave refer to the main theme and Turkish-sounding scales in blues choruses that extend and unify the main idea, so the solos are more interesting and better serve the composition.”  The album continues with “Strange Meadowlark”.  Cellist, bassist and keyboardist Matt Brubeck notes “The performance here feels a bit more relaxed than on the original Time Out.  Paul wittily weaves ‘Bewitched, Bothered, and Bewildered’ into his solo, and Dave’s closing piano statement feels more tender and expansive. I recall my father listening to birdsong and pointing out little scraps of tunes to me as we took walks together when I was young. Listening to ‘Strange Meadowlark’ reminds me of those times.”

Listeners are treated to a bright-tempoed treatment of “Take Five” which features a variation of the famous drum beat that Joe Morello played on the 1959 release.  Drummer Dan Brubeck remarks “‘Take Five’ is one of the most successful creative collaborations in jazz history. At soundchecks, Joe Morello used to play around with 5/4 rhythms and Paul Desmond, liking what he heard, began to join in with several intriguing melodies. My dad helped Paul arrange his melodic ideas and came up with a vamp that glued the whole thing together.  When I was a kid I loved going to concerts where I could pick up some pointers from Joe. I remember the excitement that I and everyone in the audience felt when we heard the piano vamp to ‘Take Five’ begin. I would watch from backstage completely mesmerized by Joe’s virtuosity. That is where my love affair with the art of drumming began.”

A gorgeous, refined rendition of “Cathy’s Waltz” follows, featuring magnificent, soulful solos from both Desmond and Brubeck.  Brubeck’s daughter Cathy, the namesake of the piece, notes “When my father would come home from the road, he’d be so tired, but to connect and have some family fun he’d call a ‘jam session’. The boys would all get their instruments and I would wiggle into a blue tutu my mother had bought for me since I loved to dance.  The three descending notes in the theme make me think of a young dancer twirling and falling: “Da-da-DUM, Da-da-DUM….twirl and plop, twirl and plop.” I’m not sure if that is what Dad was thinking when he wrote the piece, but I do remember we all had a lot of laughs at those jam sessions and eventually through my antics, I got a song named after me!”

The final two songs on the release “I’m In a Dancing Mood” and “Watusi Jam” are never-before-heard tracks that did not make it to the final 1959 recording.  They replace “Pick Up Sticks” and “Everybody’s Jumpin” which were achieved in just one take on the original recording so there were no alternate takes to include on this release.  “I’m In a Dancing Mood” is the only non-original tune recorded during the 1959 Time Out session.  Bassist and trombonist Chris Brubeck notes “This ingenious arrangement of the Goodhart, Hoffman & Sigler song jumps from different time signatures and stylistic approaches, often switching grooves in a split second…It’s always great to have a “musical victory” early in the sessions to help bolster confidence, band morale, and the producer’s confidence.  This track delivers with a tight, exciting performance!”  The “Watusi Jam” was a spontaneous trio performance that the Brubeck family found unmarked on the session tapes.  The track features Dave, Gene and Joe jamming over the “Watusi Drums” bass ostinato in 6/4 (first heard on “DBQ Live in Europe in 1958.)  Dave fires off 30+ bars of bluesy licks until a reference to the melody sets up Joe’s solo.  “Six bars of the ‘Watusi Drums’ melody appear at the end, but when that tune was recorded years later on Time In it was played with a very different fast “shuffle” rhythmic feel,” Chris indicates.

The tracks on Time OutTakes offer listeners a window into the compositional mind of a true American icon, in celebration of his 100-year legacy of innovation.  To quote multiple Grammy Award Winning Producer Kabir Sehgal, “You’ll hear Dave Brubeck’s signature pieces afresh and anew.  Listening to this album will make you rediscover why you fell in love with The Dave Brubeck Quartet featuring Paul Desmond, Joe Morello and Eugene Wright.  This is mesmerizing music.”

Acclaimed Author, Grammy Winning Producer and CNN Commentator Douglas Brinkley writes in his liner notes:  “Once the Dave Brubeck Quartet released Time Out in 1959, the world of jazz was never the same. What Time Out soon made clear was that Brubeck was much more than a pianist and composer; he was a genius of stunning originality. Time Out was an instrumental album which had the power to make people dream big or contemplate life or swing till dawn.  Time OutTakes features alternative takes to the masterpiece that blew the hinges off the doors of jazz. What a high privilege it is to be able to be in the studio with the quartet as they innovate using 9/8, 5/4, and 6/4 time on such classics as “Blue Rondo a la Turk” and “Three to Get Ready.”  What joyous music for the ages!”