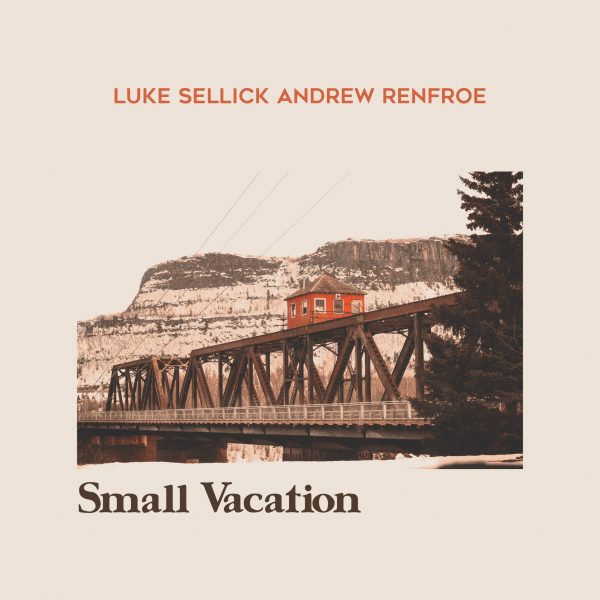 New York City jazz scene staples Luke Sellick and Andrew Renfroe are delighted to announce their first studio release as a duo, Small Vacation.  The pair channel their improvisational prowess into a collection of enchanting arrangements of some popular songs of yesteryear.  With a paired down instrumentation, guitarist Andrew Renfroe and bassist Luke Sellick create a wonderfully full sound.  The duo demonstrate their jazz sensibilities on renditions of songs from such iconic artists as Tom Petty, Neil Young and Glen Campbell.  Small Vacation is a self-release and will be available on all digital platforms on November 20, 2020.

After playing together in various contexts as graduates from Juilliard, the duo premiered in 2018 at Caramoor Jazz Festival, Katonah, New York where Sellick and Renfroe first debuted these interpretations of classic songs.  Small Vacation offers a collection of songs that had an impact on Sellick and Renfroe’s musical upbringings.  Sellick notes, “what you are about to hear is our re-imagination of these classic songs in as honest and personal way as possible. I hope our love for the original versions is apparent. Each of these tunes present unique improvisational challenges and creative opportunities that we enjoyed tackling. Overall, I hope this is a record that you can enjoy for its musical conception and inventiveness, or just to relax at the end of a long day.”

Small Vacation begins with a traditional song entitled “Hills of Mexico”.  Renfroe indicates “the arrangement is meant to modernize the song but still give the sound of rolling open plains.  I think it was when we first played this song together, we realized we had a really strong concept for an album.”  The duo demonstrates their masterful interplay and dynamic sensibilities on this track, setting the tone for a release that is both exploratory and evocative.

The album’s second track “Wildflowers”, a Tom Petty classic, exudes positivity.  Renfroe’s guitar refrains emphatically state the blissful melody while locking into a soulful groove with Sellick.  Renfroe and Sellick also demonstrate their improvisational acuity on this track, Renfroe’s melodic musings soaring over Sellick’s jubilant bass-lines which Renfroe indicates are “infectious”.  The release continues with the Neil Young-penned composition “Tell Me Why”.  Renfroe notes that the music of Neil Young was something that was common to both artist’s upbringings.  A subtle reharmonization brings out the nuance’s of Young’s original melody.  Renfroe and Sellick both take a lyrical approach to soloing over this lush arrangement of the folk-rock song.

“Someday Baby” marks the album’s shift towards several standards of the blues idiom.  This Renfroe arrangement of a Mississippi Fred McDowell delta blues song sees an exploration in harmony while keeping the original melody intact.  Renfroe indicates, “as “out” as the harmony can get, it retains a groundedness/blues quality that keeps the tune playable and palatable.”  “Jolene” is probably the most widely recognizable song in the set, the artists used a minor blues-like solo section based on Bobby Broom’s “D’S Blues”.  “Hard Time Killing Floor Blues” is a haunting rendition of the Skip James classic.  The cut heard on the album was the first-take that the duo performed in the studio.

The album concludes with Glen Campbell’s “Wichita Lineman”, another song that was a commonality in the musical upbringing of Renfroe and Sellick.  This track pairs upper echelon duo performance with a striking, emotionally rich arrangement.

Renowned guitarist Russell Malone notes in the album’s liner notes, “guitarist Andrew Renfroe, and bassist Luke Sellick are two of the finest young players on the scene today. They both have spent time in the trenches, playing in all types of musical situations. They’ve come up through the ranks playing with established players. These young men have put together a wonderful set of music on this recording. It’s personal and fresh, but you can still hear the lineage.”

Bassist-of-choice for top-tier artists Benny Golson, Russell Malone, Monty Alexander and others, Luke Sellick is a compelling creative force on the New York jazz scene. Raised in the rich and eclectic musical climate of Winnipeg, Canada, Luke’s musical journey led him to NYC where he attended The Juilliard School and was mentored by legendary bassist Ron Carter. He apprenticed musically with pianist Johnny O’Neal, performing weekly in classic NYC jazz clubs Smoke, Smalls, and Mezzrow.

Luke is currently based in Harlem, NYC and has recently appeared in concert with George Coleman, Ron Blake, Jimmy Greene, Alina Engibaryan, Monty Alexander, Benny Golson and many others. In addition to his busy touring schedule, Luke is active as a teacher and clinician, working with students in New York City public and private schools, various colleges, and can be heard regularly at his church in NYC, Redeemer Presbyterian. His debut album Alchemist was released in March 2017 on the Cellar Live label, followed by his gospel-infused Christmas EP.

From Jupiter, Florida, with a Master of Music from Juilliard (2016), Andrew Renfroe credits much of his sound to his development at The Jackie McLean Institute of Jazz in Hartford, CT, where he earned his Bachelor of Music in 2013. He has performed in the bands of Steve Davis, Nat Reeves, Javon Jackson, Terrace Martin, Mike LeDonne, and J.D.  Allen.  Currently, he is a member of many working groups including those led by veterans Carmen Lundy, David Weiss and Ned Goold, as well as groups led by his peers Braxton Cook, Jonathan Barber, Jonathon Pinson, Luke Sellick, Arnold Lee, and countless others. Renfroe’s own projects reflect his diverse influences and have included a re-imagining of Delta Blues legend and originator Son House’s music through the aesthetic of the John Coltrane Quartet, as well as a project which takes traditional music from Burkina Faso and Mali, West Africa and places it in a modern jazz quartet setting. Both of these projects were presented at Jazz at Lincoln Center. He is currently working on arrangements of French composer Olivier Messiaen’s Organ Works. An accomplished composer, he attended the Betty Carter Jazz Ahead program in 2013, and is a co-writer in the group BONOMO,  led by his long-time collaborator Adam Bonomo.