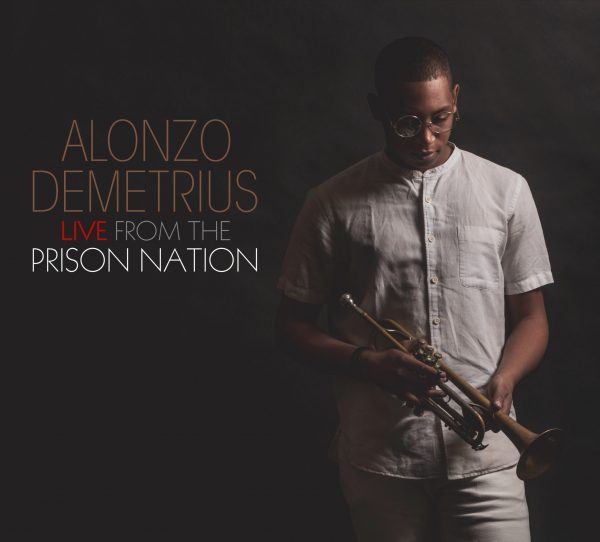 With the state of our nation and racial injustice in mind, trumpeter Alonzo Demetrius and his working band The Ego are set out to release their debut album Live From The Prison Nation with Onyx Productions on October 16, 2020. Joining Demetrius on this socially conscious recording  is tenor saxophonist Yesseh Furaha-Ali, pianist Daniel Abraham Jr., bassist Benjamin Jephta, and drummer Brian Richburg Jr. Demetrius, a New Jersey native, has gained a rapport for his brilliance as a composer and is uniquely recognized for his implementation of electronic processing.

Demetrius’ appetite for an eclectic sound might better be described as a lifelong experimentation with jazz. At 8 years old, he began to learn the piano while accompanying his keystrokes with vocals. As he developed musically, Demetrius embraced his classic training in trumpet pedagogy in wind ensembles, symphonic orchestras, pit orchestras, marching bands, big bands, and small jazz ensembles alike. His first experience as a bandleader was at the young age of 11 years old when he formed a jazz sextet.

The release of Live from the Prison Nation will mark Onyx Productions’ first release of an instrumentalist other than its founder, Ralph Peterson. The drummer and composer served as a source of inspiration for Demetrius’ work—while teaching Demetrius at Berklee College of Music, Peterson challenged his students to grapple with the social and political subjects that musicians often encounter. While Onyx Productions celebrates this release as the first of its kind, Demetrius will also celebrate his first album release as a bandleader. “Alonzo has shown immense potential from the moment I met him as a student. This project is full of the fire and restless energy of his generation. We are proud to have him release Live From Prison Nation on the Onyx Productions Music Label,” said Ralph Peterson, adding, “…this music has depth and purpose and should be checked out by those seeking serious music with a message.

Live From The Prison Nation is described as Demetrius’ personal form of protest against the Prison Industrial Complex. “Inspired by the teachings of political activists such as Mumia Abu-Jamal and Angela Davis, as well as interviews with current and ex-convicted felons, I created this album as a reflection of my ideas based on personal experience and the experiences of other Black people in my life,” says Demetrius. Amidst a global pandemic, the deaths of George Floyd, Breonna Taylor, and now, the shooting of Jacob Blake, have sparked a resurgence of the Civil Rights Movement. “60 years in the making, this movement has finally begun to take root in the hearts and minds of people all over the world. With this album I aim to continue the global conversation and provide a platform for those whose voices are often left out.”

Unveiling a composition that speaks to the complicated journey of Black livelihood in America, Demetrius samples speeches by Davis and Abu-Jamaal to convey an outright, timely message that is all the more personal. The album is made up of six tracks, all of which are originally composed with the exception of the second track, “The Principal.” Demetrius’ explorative patterns as a composer are evident as the political audio samples progress and become drowned by The Ego. On the first track, “Expectations,” Demetrius introduces the contested subject of prison reform through an audio clip of Angela Davis. While Davis raises her brow at the term “prison reform,” Demetrius and The Ego overlap Davis’s words with an instrumental variety, providing a greater volume to the very words that Davis is criticizing. “Expectations” is everything but deceptive, guiding its listeners through a framework of political rhetoric, a suspenseful opening sound, and a playful optimism represented through Demetrius’s variation in pace and melody..

“This is what community looks like” a protesting crowd chants at the beginning of the album’s fifth track, “Foo’s Interlude.” Shortly after, Demetrius sounds his trumpet to contrast the crowd’s voices. Lengthy and somber notes are complemented by the rapid and lighter taps of his pianist and drummer. Demetrius’ interlude seamlessly transports the listener to his final track, “Foo Shit,” a stronger declaration of community that is endorsed by the band’s upbeat melody that transitions into a slow-to-fast solo by Demetrius. Over the course of the album, the listener encounters the verbiage and sounds necessary to inspire contemplation and action. As “Foo Shit” closes out with the deep and soft notes of Demetrius’ trumpet, listeners hold onto an essence of promise in a moment of political unrest.

Demetrius cites the historic Philadelphia Clef Club of Jazz as an influence for his present work. After two years spent at the club amongst other talented young professionals, Demetrius gained life-long friends and mentors. After obtaining his Bachelor’s in Professional Music at the Berklee College of Music in 2018, he continued his stay in Boston to perform within and around the city. In 2019, Demetrius acquired a Masters degree from Berklee’s Global Jazz Institute Masters Program. Demetrius’ contributions to the jazz community are not limited to performance—since obtaining his Masters, he has instructed masterclasses domestically and abroad at Berklee College of Music, IMEP Paris College of Music, Music Academy International, Fundación Danilo Perez, to name a few. Since arriving in New York City about a year ago, Alonzo has shared the stage with the likes of Terri Lyne Carrington, Mimi Jones, Ralph Peterson and Dezron Douglas, among others.