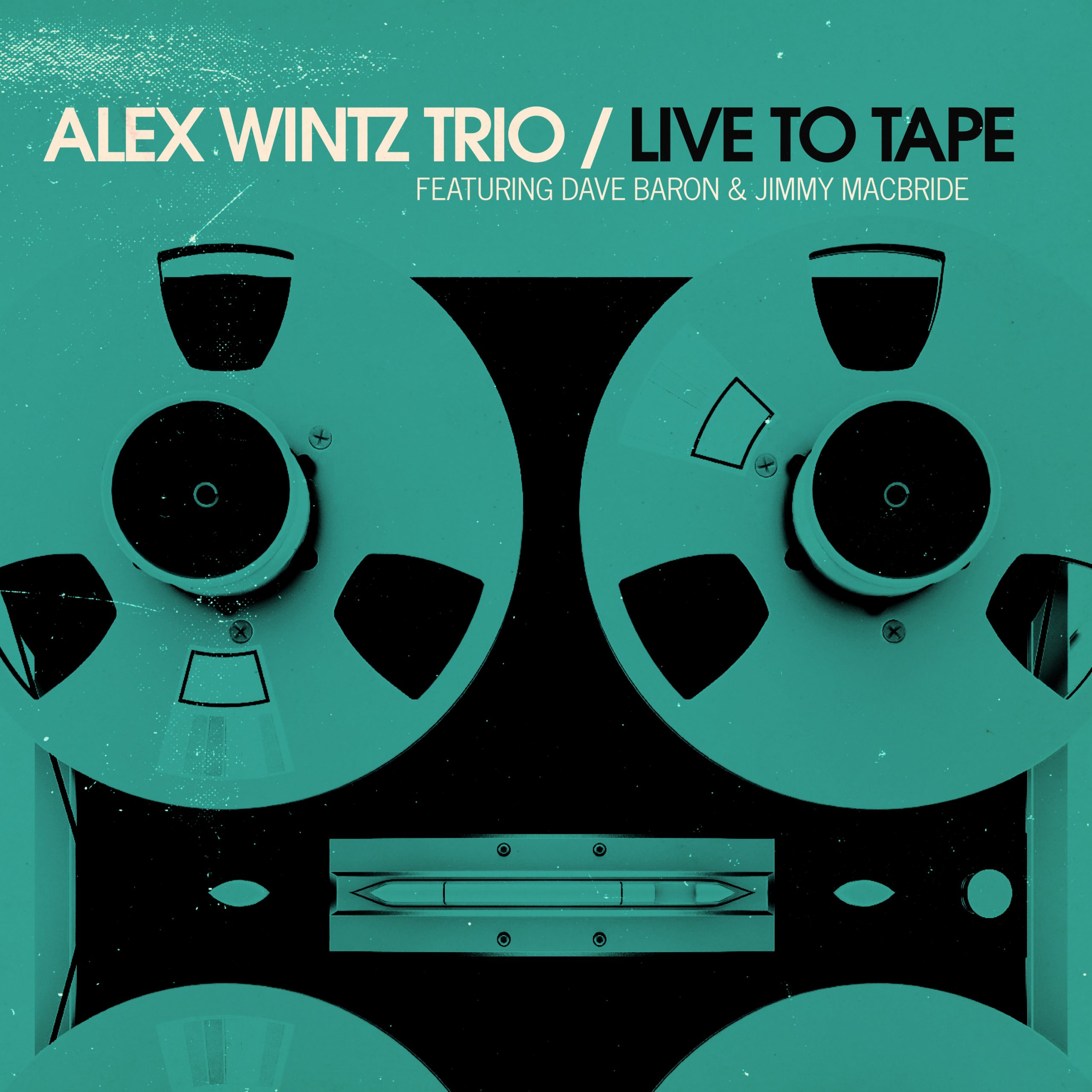 Celebrated Guitarist Alex Wintz Announces his Sophomore Release, Live to Tape Out November 6th On Outside in Music

Acclaimed guitarist Alex Wintz is pleased to announce the November 6th release of Live to Tape, a follow-up to his lauded debut LifeCycle.  The album juxtaposes a modern musical approach with the recording techniques of the Blue Note era.  Tracked in one session directly to tape, the resulting seven pieces display Wintz’s approach to the quintessential guitar trio format.  Accompanying him on this record is the steadfast rhythm section of drummer Jimmy Macbride and bassist Dave Baron.  Live to Tape documents a trio with years of familiarity at its most relaxed and spontaneous. This is his Outside in Music debut.

On Live to Tape, Wintz and his trio explore some of the most exciting sounds of the past and present; a modern celebration of the hallmark recordings that had a large impact on the guitarist’s musical upbringing. Among the tracks on this new recording are an acoustic reframing of a Herbie Hancock electronic classic, a new take on a Great American Songbook standard, and four new original works by Wintz highlighting his evolution as a composer.  Contemporary influences are also featured in Wintz’s adaptation of singer/songwriter St. Vincent’s “What Me Worry”. Live to Tape saw its inception in January 2019 when noted engineer/producer Evan Sutton, a longtime friend of Wintz’s who has worked with such artists as Common, Eddie Palmieri, The Strokes and Robert Glasper, approached Wintz about collaborating on a recording at Red Bull Studios.  The studio had recently acquired a Studer a827 tape machine, an iconic piece of analog recording technology known for its warm, vintage sound; this piece of equipment would act as a fitting medium for Wintz’s supple tones and impassioned compositions.

Regarding the classic Blue Note era albums that were so influential to the recording process, Wintz notes “These storied records were tracked in a short amount of time in the studio with familiar musicians, allowing the listener to get up close and personal to the creative process.”  As a response, Wintz made the decision to track this evocative new release in one session with his long-time rhythm section of Jimmy Macbride and Dave Baron.  Nothing defines the skill and creativity of a jazz guitarist as their ability to perform in a trio format.  In this setting, the guitarist is solely responsible for painting an intricate and detailed picture for the listener.  Wintz hinted at his trio persuasions in LifeCycle and thanks to Live to Tape they are completely on display.

From the first notes of the opening track “Idris”, Wintz sets an unmistakable musical scene. “Idris” is a love letter to the groove of the iconic New Orleans percussionist Idris Muhammad. First exposed to Wintz through his recordings with John Scofield and Ahmad Jamal, the one of a kind funkiness that Muhamad brought to the music proved to be an essential ingredient in this piece. The tune’s simple yet nuanced framework, allows for the fullest interaction with the trio. Jimmy Macbride lays down an exuberant drum solo halfway through, leading to an all-out sonic journey to cap the track. “Idris” is an infectious jam that is meant to lift the spirits and honor one of the music’s great timekeepers.

The inspiration behind “On a Summer’s Day”, also composed by Wintz lies in the harmony of some of Wintz’s compositional heroes, Mulgrew Miller and Kenny Kirkland. Pieces by these jazz masters such as “Grew’s Tune” and “Steepian Faith” left such an indelible mark on Wintz that he wanted to write a piece for this record to honor their musical footprint. This weaving of blues sensibility with complex chord passages has guided Wintz as both an improviser and composer throughout his artistic evolution.

While showcasing the unique compositional identity of Alex Wintz, “Live to Tape” also features three compositions by composers that are indicative of his eclectic musical tastes. “Textures” is an acoustic treatment of the all-electric masterpiece by Herbie Hancock from the 1980 album, “Mr. Hands”. The trio’s group dynamics and collaborative spirit are on display, starting with Dave Baron’s first notes of the bass ostinato. Wintz’s interpretation of the Leonard/Martin song, “I’m All Smiles” gives the listener a taste of the band’s ability to spark creativity from the pages of the Great American Songbook.

Jazz as a genre has continued to progress, however it’s culture of adapting music to the canon seems to have stalled over the last 40 years. “What Me Worry” by Annie Clark, known by her stage name St. Vincent, is Wintz’s attempt to bring this tradition of adaptation into the 21st century. This rendition opens the door for the jazz listener to be exposed to an indie songwriter, penning timeless music not usually explored by jazz artists and listeners.

Live to Tape documents in a vintage recording environment, a modern sound from the Alex Wintz Trio.  The power of the paired-down instrumentation is on full-display from beginning to end.  It demonstrates to the listener how groove, communication, and interaction flows organically to create a musical story. The joy felt and expressed in this recording, emanates from “Live to Tape” and will invite the listener to take part in this musical narrative.

More About The Artist:

Grammy-nominated guitarist Alex Wintz is quickly gaining a name in the international jazz community as a performer, educator, and composer. His talent and embrace of contemporary influences molded with a deep gratitude to the traditions of the past has garnered him numerous accolades and acclaim from music lovers across the globe. Wintz is a frequent collaborator with Etienne Charles, Ben Williams and Sound Effect, Roxy Coss, Jeremy Pelt, Peter and Will Anderson, and Nick Finzer and has performed at the Newport, Monterey, Montreux, and Montreal Jazz Festivals, among other major venues.

Born in California and raised in New Jersey, Alex began playing guitar at an early age. Alex graduated Summa Cum Laude from the Berklee College of Music in May 2010 and completed his Masters degree from the Juilliard School in May 2012. Awards and recognition achieved include National Foundation of the Arts ARTS Award winner, Clifford Brown/Stan Getz Fellowship All Star, Most Outstanding Jazz Soloist in High School Category in the Downbeat Music Awards, Berklee Guitar Achievement Award, and Semi-Finalist in the Montreux Jazz Guitar Competition and Detroit Jazz Festival Competition. Alex currently is the guitar faculty for the New Jersey Performing Arts Center Jazz for Teens program teaching guitar technique, advanced theory and ear training, repertory building, and ensembles.

In 2017, Wintz released “LifeCycle”, his debut recording on Etienne Charles’ Culture Shock imprint. The album, both challenging and accessible garnered critical acclaim with strong endorsements from Downbeat Magazine (3.5 Stars), All About Jazz, and The New York Jazz Record.

“Live to Tape” Wintz’s upcoming release featuring his trio of Dave Baron (bass) and Jimmy MacBride (drums) will be released in November 2020. As a sideman, Wintz has appeared on over 30 releases including the 2020 Grammy-nominated Terraza 7 Big Band recording, “One Day Wonder”.