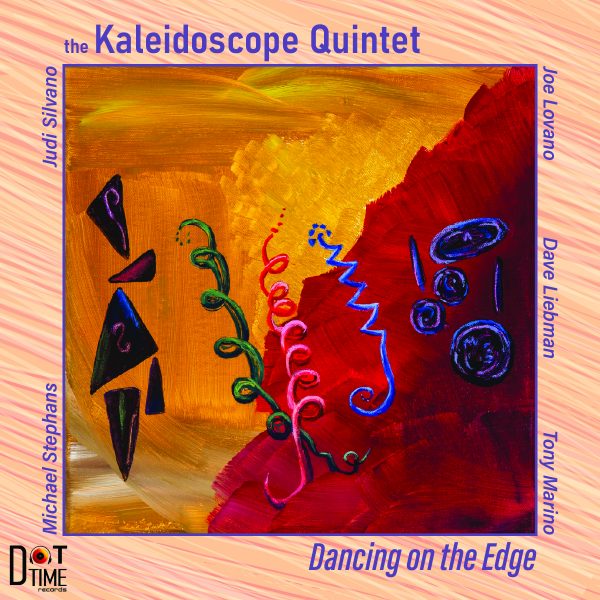 Our days are a kaleidoscope. Every instant a change takes place…New harmonies, new contrasts, new combinations of every sort. Nothing ever happens twice alike.

Dot Time Records is proud to announce the October 23, 2020 release of Dancing On The Edge, a new recording from the Kaleidoscope Quintet, made up of saxophone legends Dave Liebman and Joe Lovano, vocalist Judi Silvano, bassist Tony Marino and drummer Michael Stephans. Recorded live at the Deer Head Inn in 2013, Dancing On The Edge is a striking live performance that showcases the boundless artistic possibilities when five distinctive musical voices come together as one.

The kaleidoscope, with its ever-changing patterns and colors, moves in different shapes and forms depending on how one sees them. For two centuries, this instrument has been the source of wonder for people of all ages and walks of life. Philosophers, scientists, wordsmiths of every literary genre, visual artists, choreographers, musicians – and last but not least – children, have been entranced by the mystery and beauty of colors and shapes that dance and merge with each other in a state of constant change.

The kaleidoscope has also intrigued drummer Michael Stephans, who sees the instrument as a reflection of his own artistic endeavors. “As improvising musicians in performance, our quintet thrives in a kaleidoscopic world where we are independent “voices” who – while initially unique in our own identities, come together and become part of a larger sonic entity, only to shape and re-shape ourselves throughout each performance; that is, we move to re-assemble sounds and are ephemeral – constantly changing musical shapes and visions,” explains Michael Stephans in the liner notes. And so, the name of this group is a particularly apt one for these five, multifaceted sonic adventurers.

Dancing On The Edge was recorded at the world-famous Deer Head Inn one evening in mid-November, 2013. Michael Stephans is not only a renowned drummer with an impressive four-decade career under his belt but he is also a renowned poet and author. It was the publication of his book Experiencing Jazz: A Listener’s Companion which brought about this performance. Published the year of recording by Scarecrow Press, Experiencing Jazz… is an expansive survey on the art of listening to and enjoying jazz. Dave Liebman and Joe Lovano contributed prominently to the volume (Liebman even contributed the Preface), and so the two musical compatriots joined Stephans for the launch party and celebratory performance.

The Kaleidoscope Quintet performed a varied set that night. For this recording, five cuts have been selected: “Blackwell’s Message” and “Topsy Turvy” by Joe Lovano, “Day and Night” and “Get Me Back To The Apple” by Liebman and a lively rendition of the beloved standard “There Is No Greater Love”. Silvano lends her expressive and singular vocal stylings to the two Lovano-penned compositions, showing off her acrobatic chops as her voice literally dances through the changes, almost like a third horn. Liebman and Lovano’s dueling horns – another musical dance that the two saxophone titans have been participating in together for decades –  most notably in their co-lead endeavor Saxophone Summit – shine throughout the set. Bass veteran Tony Marino and colorful drummer Stephans are the anchored and steadfast rhythm section.

Dancing On The Edge displays the seemingly limitless artistic possibilities that can occur on the bandstand and the affecting power of live music – something that is so sorely missed in this post COVID-19 world. Stephans sums it up well in his liner notes: “…at our best, we are what jazz writer Whitney Balliett called “the sound of surprise,” where the level of intuitive interaction is so high that we keep our listeners and ourselves engaged and alert to new melodic, harmonic, and rhythmic possibilities.” A rich and musically diverse offering, Dancing On The Edge is truly a treat for the ears.