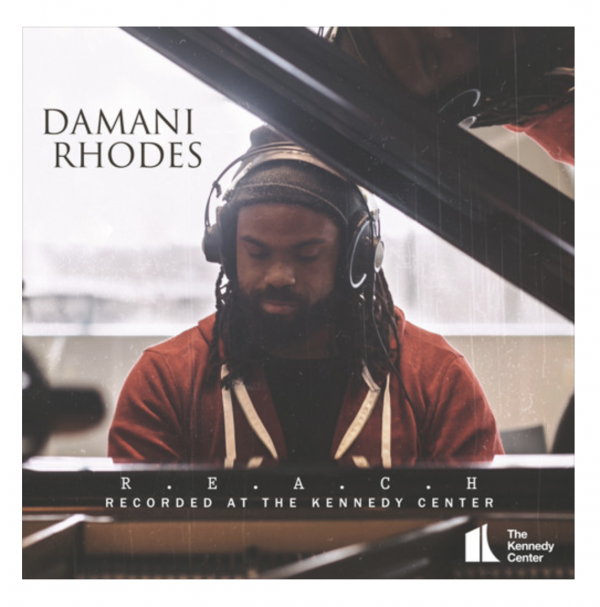 Pianist and Composer Damani Rhodes Announces the Release of his Recording Debut, R.E.A.C.H, Out November 6, 2020

“With R.E.A.C.H, Damani Rhodes is set to really see his star rise, and rightfully so. His past efforts as a part of Mino Yanci and Sol Development have led to some excellent projects but it’s now time for Rhodes to focus on sharing his own and complete musical vision to audiences who will no doubt fully embrace his talents.” – UK Vibe

Pianist and Composer Damani Rhodes is thrilled to announce the release of his recording debut, R.E.A.C.H.  This recording of evocative R&B-infused jazz represents the impassioned, spontaneous, sonic exploration of a musical outing of masterful musicians.  This release chronicles a collaboration between Rhodes and the Kennedy Center in Washington, DC that began in February with a residency at the Kennedy Center’s ‘The REACH’, which is where this decidedly modern-sounding release gained its name, and also where its five tracks were conceived and recorded.  Most recently, this collaboration continued with Rhodes’ performance on the Kennedy Center’s Couch Concert, which can be heard here.  R.E.A.C.H prominently features pianist and composer Damani Rhodes alongside drummer Somadhi Johnson.  Special guests include celebrated trumpeter Keyon Harrold and vocalist VADIA. R.E.A.C.H. is a digital release, and will be available via Bandcamp here.

Regarding the residency that acted as the catalyst for the creation of his debut album, Rhodes notes: “they gave us a room overlooking the Potomac river and we had from 10 AM until 6 PM to do nothing but create, with absolutely no expectations.  At the end of our week at The Reach, we walked away with the songs that are being released on this project… I intentionally wanted to ensure that what is on this recording is what was happening in that room that week we were in DC.”

The five tracks on R.E.A.C.H exemplify different segments of Damani’s artistry.  From the tender musings of “Slow Dance in the Jungle”, to the carnal bright-tempoed drive of “Sludge”, Rhodes’ compositional prowess and stunning facility on the piano are well-demonstrated. “One of the things that I thought was interesting and kind of cool was that we were like an art exhibit. As people would come to visit the Kennedy Center, they would be looking at us from outside the glass one story above.  It was an interesting way to bring the audience into the creation of art while it was happening” Rhodes notes. This album release is effectively an extension of that experience, taking the listener on a journey through the artist’s organic compositional process.

R.E.A.C.H begins with “Sludge”, the track was written based on a drum groove that Johnson spontaneously played during the sessions at the Reach.  Following the muscular groove, Rhodes added the driving synth-bass line and conceived the song’s feel changes.  “I envisioned the listener driving/riding on the freeway and maybe being lulled to sleep by the repetitive nature of the scenery but then having to come to an abrupt stop,” noted Rhodes, “I then infused an RnB/Pop vibe over the same drum groove so we know that we’re still on the same road even though there’s been a change of scenery.”

“Mon Yawn Ugh” (Pronounced mañana) begins with an ostinato pattern that carries throughout the song and acts as a mantra, “no matter what is happening in the song, it always gets drawn back to that mantra to refocus the listener in their meditation” says Rhodes.  Rhodes builds his solo from a melodic meditation to a fiery sonic exploration, leading into a solo by guest artist Keyon Harrold who, Rhodes exclaims, “takes it to the moon.”  “Slow Dance in the Jungle” features vocalis VADIA singing a wistful, lyric-less melody accompanied by Rhodes and Johnson.  The composer indicates “The rest of the project is pretty rhythmic and has a “summery” kind of vibe. But I was intentional about this song because I wanted to express something more vulnerable – something more delicate.”

“Dawn of the Horizon”, takes an auditory journey through one of Rhodes’ favorite Bible verses, “Weeping may endure for a night, but joy comes in the morning.”  Rhodes notes “The song starts in the middle of the night.  It’s almost a little eerie and dangerous but by the time the melody comes in, dawn is approaching and you can see it on the horizon.”  The solo itself represents a dark and chaotic time rife with confusion and lacking hope.  The solo peaks in intensity right before the joyful melody comes back to the fore, conjuring images of the sun breaking over the horizon.

The final track on R.E.A.C.H, “Right Place Right Time” is the first song that was written and recorded by the duo at the Kennedy Center.  The track seems to summate the entire transformative experience that took place on that fateful week in February.  The composer indicates that the duo had just deboarded a red eye flight from California, and had rushed to the Kennedy Center.  After some trouble finding the studio in the Kennedy Center’s massive facility, the duo didn’t know what to expect from this arrangement, but they had to trust that they were in the right place at the right time.  As fate had it, their spirit and optimism lent itself to an album’s worth of musical invention.

R.E.A.C.H is a stunning document of improvisational ingenuity.  The composer hopes that the listener will gain inspiration from this release, and make it the soundtrack to a part of their life, making it a part of their journey.

Born and raised in Sacramento, California, Damani Rhodes recalls his early musical influences being in the church.  After being inspired by the passionate performance of a young drummer at a Sunday service, he was given a drum kit from Sam’s Club by his father which he played for several years until it was unplayable.  Around the same time, Rhodes was given a guitar with the top two strings removed, on which his stepfather taught him to play the bassline from Miles Davis’ “All Blues”.  It was on these two tattered instruments that Rhodes first developed the basis for rhythm and harmony.  While these early passions exponentially grew within Rhodes, It wasn’t until he was 18 that his talent would be refined on the piano.  After being moved by the teachings of a jazz improvisation professor, the doors fully opened for Rhodes, leading him to a journey of discovery and invention.

In 2017,  Damani founded a drum education tech company (Mobile App) DrumTrax that helps drummers improve their skills in order to find their own voice and explore their creativity.  With over 50,000 app installs, the app is continuing to contribute to the drum community worldwide.