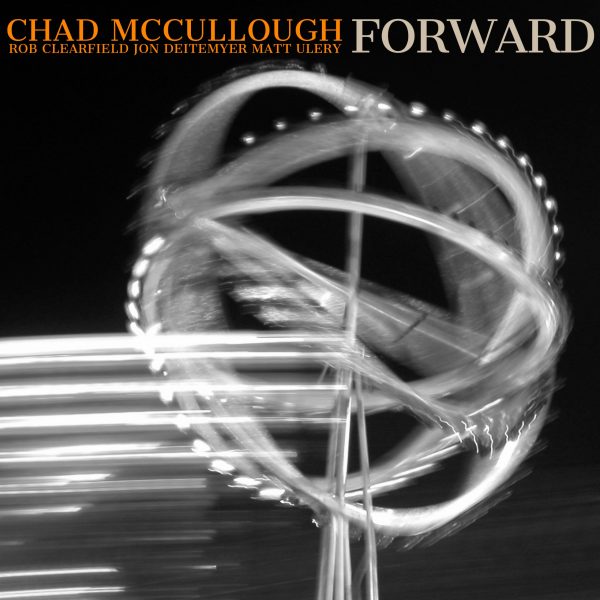 Masterful Trumpeter and Composer Chad McCullough Announces the Release of Forward on Outside in Music, Out October 16th

Outside in Music is thrilled to announce the October 16th release of Forward, the new album from trumpeter and composer Chad McCullough. On his 8th release as a leader, McCullough has assembled a top-flight rhythm section made up of three of Chicago’s trailblazing musical voices: pianist Rob Clearfield, bassist Matt Ulery and drummer Jon Deitemyer.  Renowned producer Ryan Cohan augments the affair by contributing additional programming and part-writing to Forward; creating ambient spheres for McCullough’s lyrical compositions to live within and augmenting the ensemble in post-production. The phenomenal musical interchange of the ensemble gives this cohesive album the feel that its sum is much larger than its unique parts.

Forward is McCullough’s first release under his own name in over a decade. Since releasing his debut Dark Wood, Dark Water in 2009, the formidable trumpeter has appeared as co-leader on two albums with the Spin Quartet, made up of a Geof Bradfield, Clark Sommers and Kobe Watkins as well as a series of five albums with Belgian pianist Bram Weijters, including 2018’s 25-movement opus Pendulum, and with the Slovakian pianist Michal Vanoucek. As a sideman, McCullough has appeared on dozens of projects including ones led by Ulery, Dustin Laurenzi, Shawn Maxwell, The Kora Band, James Davis and more. Now, McCullough is excited to step out and present his original compositions and arrangements in the company of Chicago’s best.  “I’ve been doing so much collaborative work, and wanted to make a different kind of statement with this release. Not that this isn’t collaborative – in many ways it’s more so, but I wanted to write music about places or experiences with meaning to me. I wanted to showcase the ensemble and give the trumpet a space to breathe in the middle of it all.”

Forward takes its cues – musically and thematically – from McCullough’s adopted city of Chicago. 7 years ago, McCullough relocated to the Windy City from his native Seattle in hopes of joining the vibrant and creative music scene. “The music coming out of Chicago really resonated with me. When I moved here, I immediately felt like I was where I was supposed to be.” The trumpeter was met with a warm welcome and started gigging the day after he landed, often alongside the musical heroes that inspired his move in the first place. One of those heroes was Matt Ulery, who McCullough had long admired even before he relocated. To date, McCullough has appeared on two of the bassist’s albums (Festival, 2016 and Sifting Stars, 2018, Woolgathering), and they have performed countless gigs together including a particularly memorable set at the Chicago Jazz Festival in 2018.

One of the highlights of Forward is the seamless interplay between the rhythm section, anchored by drummer Jon Deitemyer. “I always feel both supported and challenged when I play with him,” said McCullough, adding that “I completely trust his intention and intuition.” Pianist Rob Clearfield, who recently relocated to Paris and McCullough fondly refers to as a “wizard,” is equally striking on the project. Ulery, Deitemyer and Clearfield have played together in various incarnations steadily over the past decade, lending an almost familial characteristic to the date. Despite joining this rhythm section for only a handful of live dates over the years, McCullough felt right at home with them in the studio, and the cohesive results borne on Forward give the impression that this band has been playing together for ages. Perhaps it helps that much of the music was written specifically with these particularly players in mind.

“Ryan Cohan really is the not-so-secret weapon of this project,” McCullough exclaims, “He’s such a brilliant human being, and when he asked if he could be involved with this I was thrilled. His writing takes these tunes over the top, and his arrangements brought things to life in a whole new way. He truly made this project what it is, and I can’t say enough about his patience and contributions.”  Ryan notes “From my first time hearing and playing with Chad, his big beautiful horn sound, forward thinking artistry and total commitment to the music greatly impressed me. So, when the opportunity presented itself to work on Chad’s latest album, Forward, in multiple capacities – especially as co-producer collaborating closely with him on realizing his vision for the recording – of course, I was thrilled to be involved.”

Forward begins with the ceremonious opening refrain of “November Lake,” a soulful intro from McCullough before the band departs on a sultry melody accompanied by gentle comping from Clearfield and a sensitive broken swing from Deitemyer.  McCullough’s melodic passages soar over the steadfast rhythm section, displaying the composer’s stunning facility on his horn.  “Oak Park” begins with a piano ostinato which develops into a tender, contemplative melody from McCullough. The composer notes, “I composed this while sitting in Antwerp, Belgium during a tour with my great friend Bram Weijters (who helped me write this tune). Frank Lloyd Wright’s studio was in Oak Park, and there are a ton of houses he designed there. I am a huge fan of architecture and wanted to write coming from that place of inspiration. Musically, the precision of the odd-meter sections alternates with the folk-like melody, and the entire piece is through-composed to give it a sort of structural logic.”

The ensemble shifts gears with an unhurried mixed meter on “Grace at the Gavel or Grace at the Gallows.”  McCullough states “This was the first tune that Ryan Cohan wrote additional parts for and it really brought it to life. The arrangement for the melody at the end still gives me chills.” Pieces like “Focal Point” and “Water Tower Sunset,” the final two tracks on the album, take on a more personal note.  “Focal Point” was written after a particularly memorable vacation between McCullough and his fiancé exploring the lighthouses along the Michigan coast with a vintage medium-format camera. The piece explores the fanciful exploration of a new territory, and features a particularly dynamic accompaniment from Deitemyer.

The album concludes with “Water Tower Sunset,” a piece which encapsulates the energy of a sunset, which the composer correlates with sitting on his back deck watching the horizon eclipse the sun behind an old water tower.  On Forward, McCullough leaves audiences with in-depth meditations of several locations and events that have great meaning to the composer. This musical walkway through the artist’s life gives the audience insight into the mind of a masterful composer and seeks to uplift audiences far and wide.

Heralded for his “solos of mercurial poetry and high craft.” (Chicago Tribune) Chicago-based trumpeter/composer Chad McCullough is active throughout the world. Dan McClenaghan writes, “He is a rare instrumentalist who makes each note sound as if it were imbued with a deeper meaning. Certainly a player with great chops, his approach is one that is measured and deliberate, often introspective, sometimes gorgeously melancholic, and one that employs a continuity of mood and atmosphere.”

Chad holds a M.M. from the University of Washington, and a B.M. from the University of Idaho, where he was a Lionel Hampton Scholar, and was the first student to graduate with a jazz emphasis on his degree. In 2009 he participated in the jazz & creative music workshop at the Banff Centre in Canada. He was awarded a DCASE grant for an intensive study with Grammy-nominated trumpeter Tim Hagans from the City of Chicago, and is currently on the jazz faculty at DePaul University and the University of Wisconsin – Madison. Chad plays custom AR Resonance mouthpieces and trumpets, and a Hub Van Laar flugelhorn.