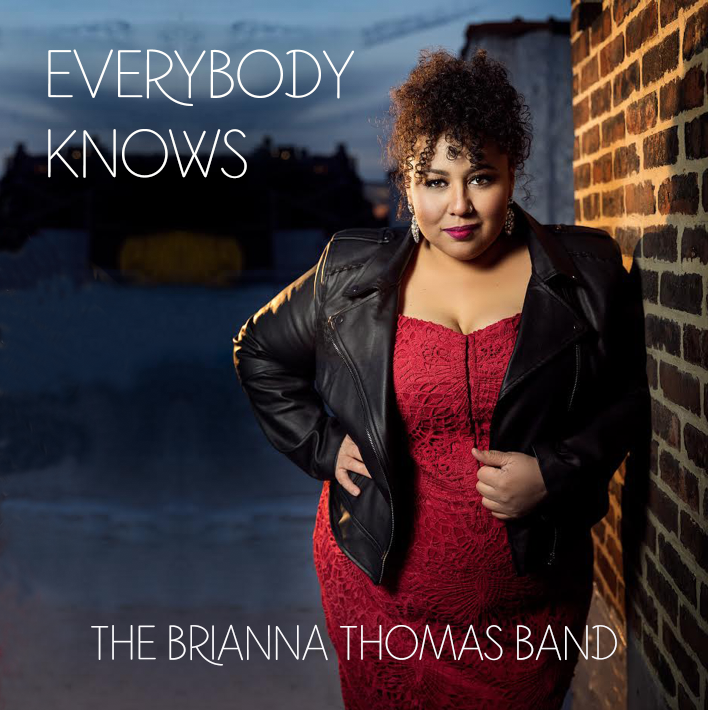 “I heard Brianna Thomas sing and I stopped in my tracks. Her soul and spirit are pure, beautiful, moving jazz at its finest”.  Marcus Samuelsson

Vocalist, composer, arranger and bandleader Brianna Thomas is proud to announce the October 2nd release of her sophomore album Everybody Knows produced by Grammy © Award Winner Brian Bacchus. Showcasing a uniquely soulful and captivating voice, Brianna Thomas presents a book of songs that encapsulates common human experiences and honors the universal truths that “everybody knows.” This collection of reimagined classics alongside some exquisite originals is brought to fruition by The Brianna Thomas Band, a group that embodies a dynamic and rich sound, influenced by the diverse backgrounds and regions each member comes from. This first rate band features the Peoria, Illinois native alongside pianist Conun Pappas (New Orleans, LA), guitarist Marvin Sewell (Chicago, IL), bassist Ryan Berg (Minneapolis, MN), percussionist Fernando Saci (San Paulo, Brazil) and drummer Kyle Poole (Los Angeles, CA). The Rock and Roll Hall of Famer, Steve Miller (who wrote the liner notes for this album) considers himself Brianna’s mentor. The soulful expression and masterful instrumentation exemplified by Brianna’s ensemble here, resembles that of her father’s band, with whom the vocalist first exhibited her blossoming talents at the tender age of six. The first single, “How Much Forgiveness”, is out now and can be heard here.

A follow up to her 2014 debut, You Must Believe in Love, Everybody Knows serves to remind listeners of the virtues and ideals that, although sometimes difficult to practice, are known by everyone. The music heard on Everybody Knows celebrates the good in humanity and strives to encourage continued compassion for all – the bandleader’s hauntingly sentimental, yet when called for, powerful performance illustrates and elevates this sentiment. Everybody knows “It’s a Sin to Tell A Lie”; Everybody understands the need to forgive (“How Much Forgiveness”); Many are familiar with both the pain (“Since I Fell For You”) and joys (“The More I See You”) of love and Nina Simone’s original, civil rights anthem “Mississippi Goddamn” is a story everybody still knows today. The vocalist lent her compositional talents to two tracks on the album: “How Much Forgiveness” and “I Belong to You” Posing the question, “how much forgiveness can belong to you?,” Thomas reflects upon the practice of understanding. “I Belong to You” tells the tale of unrequited love.

Brianna’s singing is deeply enriched by an understanding of masterful voices. Sarah Vaughan’s influence contributes to Brianna’s artistic savvy, as well as a keen instrumental perspective, while her stylistic breadth and vocal grandeur is evocative of Dianne Reeves. Her performance carries a coyness reminiscent of Nancy Wilson alongside an Ella-esque skill and enthusiasm for scatting. Perhaps Brianna’s greatest asset is the soulfulness of her sound.

Growing up in the US Heartland on the Illinois River, Brianna’s hometown of Peoria, IL served as a well-rounded musical environment that fostered Brianna’s emerging abilities. Brianna’s first music teacher and biggest influence was her father CJ Thomas, a vocalist, drummer and creative powerhouse, and it was with his band, “Dave & The Dynamics” that Brianna took her first stage, at the age of six.  Dave & The Dynamics played a gamut of music so wide that it gave freedom of thought and expression and surpassed the boundaries of separatism and judgment. This group played virtually anything soulful that moved them: from  James Brown, The Temptations, Otis Redding and Stevie Wonder to Louis Armstrong, and John Coltrane to Bonnie Raitt, Prince and Earth, Wind & Fire. Brianna recalls, “my father always told me “it doesn’t matter what you sing, but whatever you sing, sing it with conviction!”

With this offering, The Brianna Thomas Band hopes this music evokes a feeling of unity and understanding. Using her unmistakable talents for good, Brianna Thomas “hopes people can find common ground in the diversity of this music and freedom in any truth they hear.”

More About the Artist
Brianna’s talents have propelled her to many successes including performances at the Montreux, North Sea, and Umbria Jazz Festivals and in venues ranging from the Bahamas to Geneva, Switzerland. Brianna was a resident in both the 2001 and 2002 Betty Carter Jazz Ahead Programs – an international artist-in-residence program that assembles a select group of jazz musicians to perform their original compositions at the Kennedy Center. At Jazz Ahead she worked with a host of premier jazz educators and performers such as Carmen Lundy. Brianna’s extensive list of performances includes appearances with Steve Miller, Dianne Reeves, The Legendary Count Basie Orchestra, Fred Anderson, Carmen Lundy, Von Freeman, Lucky Peterson, Houston Person, The Barber Brothers, The Jazz At Lincoln Center Orchestra. Brianna recorded a song for the film Bolden, with music scored by Wynton Marsalis. She was also featured in Marsalis’ Ever Funky Lowdown, which debuted in 2018 and in Black Brown and Beige presented by Wynton in 2018.   In 2019 she was featured in a 40 city tour with Michael Mwenso and the Shakes. The words of legendary trombonist Curtis Fuller best illustrate Brianna Thomas’ abilities, hailing her as a “marvelous new artist who has all it takes to reach the top of the jazz profession and music in general.”