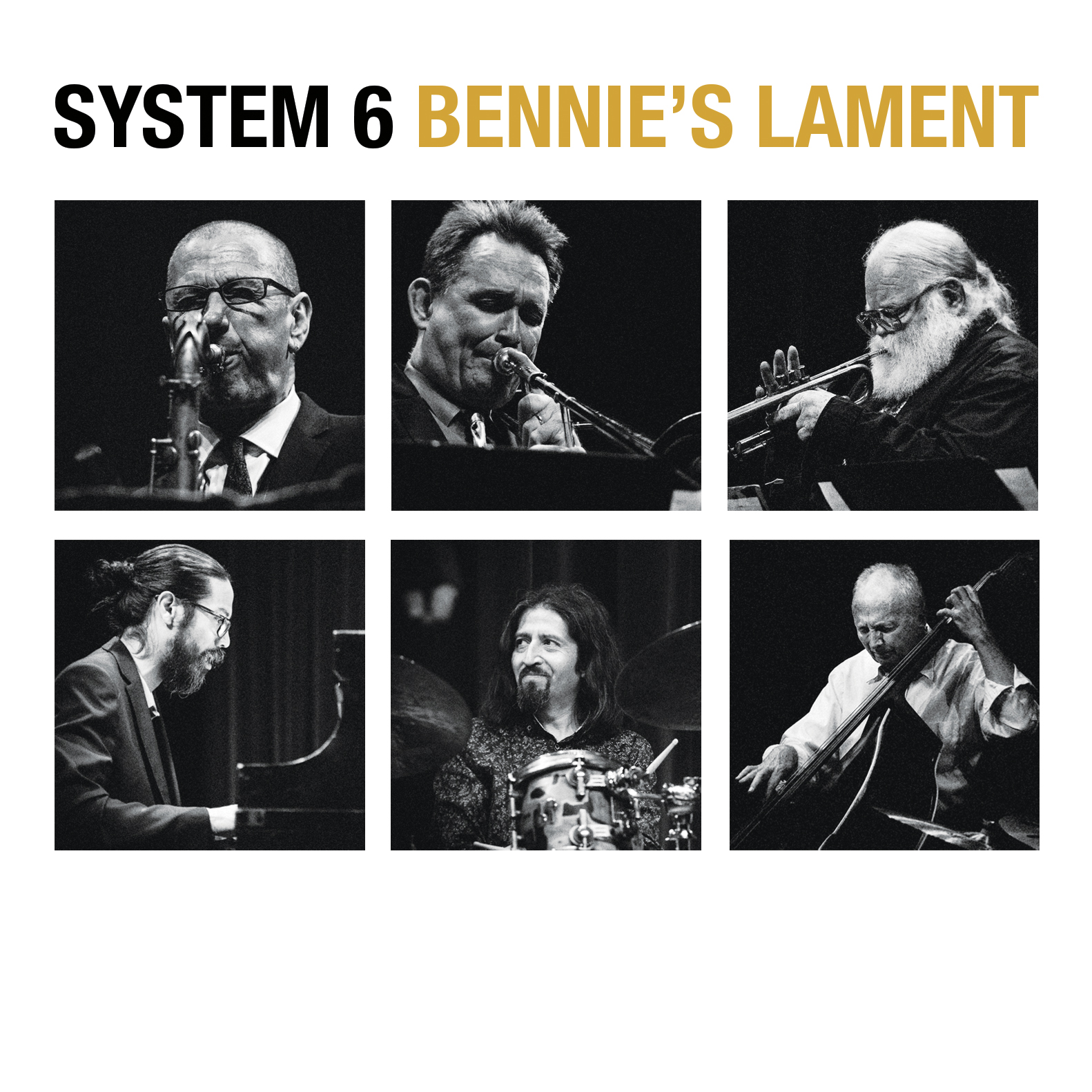 Saxophonist Benn Clatworthy and System 6 Set to Release BENNIE’S LAMENT
Due out October 2, 2020

London-bred and Los Angeles-based saxophonist Benn Clatworthy is proud to announce the October 2, 2020 release of Bennie’s Lament, the latest from his sextet System 6. Clatworthy, who came to LA to study with woodwind extraordinaire Phil Sobel in the early 1980s, has led various incarnations of System 6 over the past decade, and Bennie’s Lament is the second recording with this particular assemblage of some of SoCal’s finest instrumentalists. The rhythm section of Yayo Morales on drums, Bruce Lett on bass and Bryan Velasco on piano is stout yet nimble, with the motor to swing in double time and the feel for noirish ballads. Clatworthy plays the woodwinds— tenor, and soprano saxophones as well as clarinet, bass clarinet, flute and alto flute—and Ron Stout and Joey Sellers round out a compact but potent brass section on trumpet and trombone, respectively.

Clatworthy’s done most of the writing here, penning nine of the album’s 11 original compositions; Sellers and Morales each get into the box score, too, conceiving a tune apiece. But, refreshingly, no one here is too concerned with their individual stats. The musicians here, like all musicians, suggests Clatworthy, are in search of something more profound. In Clatworthy’s case, he’s driven by what he describes as a “search for beauty.”

The tune that speaks best to this raison d’être is the record’s closer, “The Pursuit.” Clatworthy jumps right in, using his tenor saxophone to issue a strident, almost pleading call into the deep. There’s a playful bit of call-and-response that ensues, with Stout and Sellers sounding brawny yet beautifully layered in answering the leader’s siren call, before Clatworthy steps forward to speak a musical gospel punctuated with revelatory runs of exaltation.

On the other side of Bennie’s Lament is a rich tapestry of an opener called “The Decider,” opening with festive yet hard-charging rumba rhythms before sliding into an elegantly controlled rubato. As the tempo slows, Clatworthy’s soprano sax issues like a stab of brilliant sunlight, and, gradually, out of orchestrated storminess, the tune re-emerges on the other side as a fast swing before ending much the same way as it begins.

Next is “How They Talk,” a tune inspired by the cadence and speech patterns of cable news’ talking heads. Morales’s percussive entrance presents like an unceasing, metronome-like cog in a fully automated assembly line—like the cable news programs, it’s at times there in the foreground, at times there in the background, and like the 24-hour news cycle, it never stops.

But that’s where the similarities end—no hot air or vacuous platitudes here. Instead, the musicians let their instruments do the talking. Sellers, Lett, and Velasco all solo memorably across the track’s straight-ahead middle before Morales shepherds the group back to the evocative dissonances to which the listener was introduced eight minutes prior.

“Terry Briggs,” a noirish ballad with an air of mystery, was written for Clatworthy’s late friend Terry Briggs, a singer known to sing in the style of Johnny Hartman whose jazz club in Santa Barbara was a regular hit for SoCal musicians. While “Pelican Plus One” is a moody, time-alternating reflection on, what else, the predatory habits of pelicans. Have you ever noticed that when a pelican is fishing, he’s usually accompanied by a seagull? Clatworthy has and was inspired to write a tune about it. The body of the tune is written in 9/4, while the bridge is in a double time 4/4 highlighted by Lett’s bouncy walking basslines.

“Two Little Brothers” is a musical portrait of Morales’s two young sons at play, effervescing with curiosity, fearlessness, and an extended drum solo from dad, proving that fun is by no means the exclusive province of the young.

The title track, an homage to John Coltrane’s “Lonnie’s Lament,” a tune Clatworthy had admired and played in clubs for years, serves, appropriately, as the album’s apex. Clatworthy and co. play this tribute in 6/8—that’s how Clatworthy has always played the Coltrane masterpiece— and at a quicker tempo than the inspirational source material, but the shared musical and emotional DNA is unmistakable. Meanwhile, Sellers’s “Good Grape” is a less emotionally fraught proposition; it’s meant to honor red wine. No doubt Bacchus would appreciate a composition so simultaneously rich and smooth, qualities aided in no small measure by Clatworthy’s turn on the bass clarinet here.

“No Collusion,” another Clatworthy original, is an E-flat blues inspired by the current US president and his penchant for prevarication. Looking for someone to believe in, Clatworthy taps Sellers, his trusty trombonist, who’s showcased here soloing through the swinging middle and charging through each restatement of the tune’s theme–no alternative facts here. “Sign of the Times” is another metaphor for our contemporary civic discourse, a fast driver with, in a true sign of the times, no clear tonal center.

The penultimate tune is “In Strayhorn’s Bag.” A tribute to the brilliant composer and arranger Duke Ellington once called “my right arm, left arm, and all the eyes in the back of my head,” it gives pianist Bryan Velasco an earned close-up and Clatworthy a rare and similarly earned opportunity to stretch out on a ballad—rare because there are but a few ballads on this mostly mid-to-uptempo recording but, more importantly, earned because Clatworthy—and all of System 6—are so generous in spreading the love around equitably.