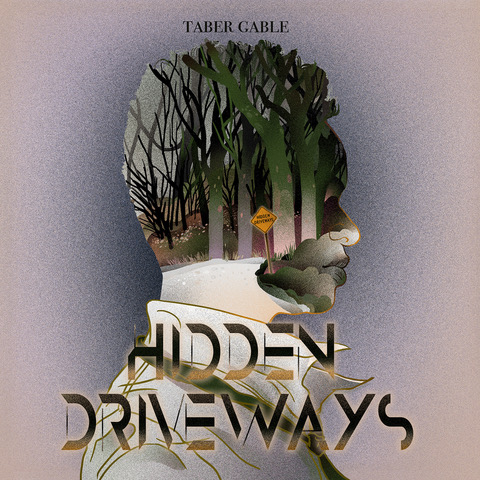 “As an artist I believe in making music not genres. This album is my perspective of the Eclecticism of Black American Music and how it has informed my craft over the years.”
– Taber Gable

Regarded as a highly sought-after pianist/keyboardist, the multifaceted Taber Gable is now proud to spotlight his own, sometimes hidden talents, as a composer, arranger and vocalist, with the release of Hidden Driveways. Due out October 9, 2020, this eleven-track collection of Gable-penned originals sees the Knoxville, TN-native, NYC-resident in the company of some of today’s leading jazz contemporaries: saxophonist Sarah Hanahan, guitarist Andrew Renfroe, bassists Kyle Miles and Drew Moore and drummer Jonathan Pinson. The title, Hidden Driveways simultaneously tips its hat to the eclectic range of hidden places within the likes of rock & roll, punk rock, blues and country, alongside other genres, that can all trace their roots back to African-American descent. “Hidden Driveways” also reminisces upon Gable’s upbringing in the south, where he often saw signs with this caution (as seen on the album artwork), while driving through the hills and valleys of Tennessee. The album’s lead single “Unspoken Realities” is out now.

In performance and composition, Taber Gable unfolds a sonic landscape that has built its foundation upon a multitude of musical influences. From the young age of nine – tracing some of his first musical experiences back to the piano at his local church – Gable found himself organically gravitating towards a range of styles which included jazz, gospel, classical, pop, R&B, soul, neo soul, amongst others. With a melancholy Drake-tinged delivery, “Tears” is a standout track from this collection, which exhibits a trap beat tastefully added by Jonathan Pinson, while “Committed” is a funk-inspired tune.

“Unspoken Realities” draws similarities between a romantic relationship and an artist’s relationship with the music industry. The track discusses the initial innocence of musicianship, when an artist simply loves music for the sake of the art, before the experience of rejection and self-doubt – a sometimes parallel cycle of events to that of a physical relationship. On this track, Taber’s sentiments toward finding and maintaining inspiration as an artist are wrapped in the lyrics of a love song about a fleeting relationship. A final standout track to the album is “Prayer for my People”, written in late 2019. After further personal research on black heritage, Taber was inspired to compose a track that followed the format of a hymn, featuring a repeated outro section, left open for meditation and reflection. With this release subsequent to the brutal killings of Breonna Taylor, Ahmad Arbery and George Floyd to name a few, this track serves as Taber’s humble offering to support the concern and continuous cry for change that must occur. Masterfully recorded in one take, Jonathan Pinson closes this hauntingly sentimental composition with a thumping bass drum, which symbolizes the heartbeat of the many lives lost. Taber reflects: “this track truly was the most magical moment of the recording, having everyone so in sync and in reflection about all that is occurring in our times.” Throughout Hidden Driveways, Taber showcases his talents on piano, keyboards, synths and vocals, and is credited to the composition and arrangement of all eleven tracks.

While completing his Bachelor’s Degree in Jazz Studies at the University of Hartford, Taber Gable had the pleasure of learning from the likes of Andy LaVerne, Steve Davis, Rene McLean, Javon Jackson and Nat Reeves. Most recently, he graduated from The Juilliard School with a Masters in Jazz Performance. During this time, he had the opportunity to study under the tutelage of Kenny Barron, Wynton Marsalis, and many other notable teachers. In recent years, Taber Gable has been called on to play and tour alongside many great musicians such as Marcus Strickland, EJ Strickland, Terrace Martin, Trevor Lawrence, Jonathan Barber, Braxton Cook, Nubya Garcia, Carolyn Leonhart and many more. Gable is a highly sought after musician in the New York jazz scene as well as being internationally known for his cross-genre abilities and captivating live performance style.