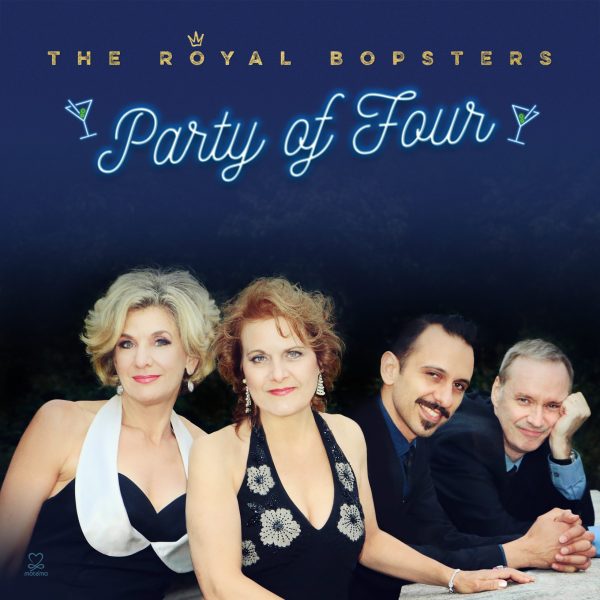 
Motéma Music is honored to announce Party of Four, the sophomore release from renowned vocal jazz quartet The Royal Bopsters, which streets November 13, 2020. This twelve-track venture, which follows up their critically acclaimed 2015 debut, celebrates both the proud history and the bright future of vocal jazz.  A hard-swinging amalgam of vocal virtuosity, electrifying group chemistry, and masterful arranging, Party of Four displays the group’s stunning facility to swing deeply and sing passionately while navigating incredibly precise four-part harmonies.

A master class in the art of vocal jazz and vocalese, Party of Four demonstrates the dazzling possibilities of four voices coming together as one. Bopsters Amy London, Dylan Pramuk, Pete McGuinness, and the late Holli Ross (to whom the album is dedicated) are joined by guest lead vocalists, NEA Jazz Master Sheila Jordan (91 years young) who delivers a delightful rendition of “Lucky to Be Me” and NEA Jazz Master Bob Dorough, whose humorous recording of his classic “Baby, You Should Know It” became one of his final recordings when he sadly passed in 2018. GRAMMY®-winning bassist and jazz personality Christian McBride also guests on bass for two strong tracks.

Party of Four follows up The Royal Bopsters’ debut release – The Royal Bopsters Project – which was an unprecedented vocal jazz summit featuring five of history’s most celebrated vocal bop innovators and monarchs: Mark Murphy, Jon Hendricks, Sheila Jordan, Bob Dorough and Annie Ross.  The album was proclaimed  “Extraordinary.” by Downbeat (4.5 stars), “A priceless landmark” by Jazz Times (Best Albums of 2015), and  “A magnum opus of jazz and song” by WBGO Radio.  Party of Four, with liner notes by WBGO’s Michael Bourne, builds on that solid foundation and is poised to become one of the defining jazz vocal albums of the year.

Cited as “expert practitioners of vocalese” in The New Yorker, The Royal Bopsters celebrated their first release with a star-studded, sold-out week-long residency at New York’s iconic Birdland Jazz Club with guests Annie Ross, John Hendricks and Bob Dorough. Darmon Meader, of the New York Voices, sang tenor on the first album, and then soon after the Birdland show Pete McGuinness, a three-time GRAMMY®-nominated arranger, stepped into the tenor chair for the group. Party of Four – the title penned by Holli Ross – began to take shape as Pete and Dylan brought additional arrangements to the group in 2016. The new music shone, and seeds were planted for the ensemble’s sensational second chapter. NEA Jazz Master Sheila Jordan, who began her career singing with Charlie Parker, and who now, with the passing of Annie Ross this July, has become the reigning Queen Matriarch of Vocal Bop, has commented “The Bopsters are my favorite vocal group.” The love is mutual, and The Bopsters include Sheila as a guest in their live shows wherever possible. Dorough, who is most famous for writing Schoolhouse Rock, also guested frequently until his sudden death in 2018. He and Annie, as well as Mark Murphy, are all much loved and sorely missed by the Bopsters.

Each Royal Bopster is a renowned jazz educator, and collectively they instruct at the entire gamut of excellent jazz programs in the NYC area: The New School (London was a founder of the program), NYU, William Paterson, Manhattan School of Music, Montclair State, City College, Hofstra and Jazz House Kids (where London & Pramuk teach and co-created their Vocal Academy). The group’s vast collective knowledge of the history and technique of the artform of vocal jazz shines through on every note.

Party of Four offers audiences a jubilant recognition of multiple generations of architects and proud purveyors of the vocal jazz art form.  Dedicated to Bopster Holli Wasser Ross, the album is a resounding celebration of life, rhythm, harmony and tradition at a time when the world can definitely use a little cheering up.

More About the Bopsters and Party of Four

Swinging soprano Amy London has been a vocal mainstay in New York City since the 1980s. She sang lead in the vocal quartet in the 6 Tony Award-winning and GRAMMY®-nominated City of Angels on Broadway for three years, has released four critically acclaimed solo albums and is the vocalist on Jim Snidero’s Jazz Conceptions and Scholastic’s DVD Ella Fitzgerald: The Tale of a Vocal Virtuosa. A renowned vocal jazz educator, London is faculty at New School, Hofstra, City College and Jazz House Kids, and has directed vocal jazz camps worldwide. She is also noted as an influential instructor for award-winning vocalists Jazzmeia Horn, Brianna Thomas and Jose James.

Holli Ross, a brilliant alto, who was sought after as an instructor (20 years as Hofstra U voice faculty) and vocal therapist, had a 30-year vocal harmony pedigree, singing with the groups String of Pearls and Mad Romance. She penned the published lyrics to “Boplicity (Bebop Lives),” a hit for Mark Murphy, as well as setting lyrics to Sarah Vaughan’s “’I Have Waited So Long,” recorded by Janis Siegel with the Count Basie Orchestra.  Party of Four is dedicated to the memory of Holli, who finally succumbed after a valiant three year battle with cancer in May of 2020.

Stunning improviser and three-time GRAMMY®-nominated arranger Pete McGuinness, the newest group member, has long been a presence on the New York jazz scene. Pete is an award-winning jazz vocalist (semifinals: Thelonious Monk International Jazz Vocal Competition; first prize: NYC Jazzmobile Vocal Contest), trombonist and leader of his own big band.  His innovative arrangement chops can be heard on four tracks on the new album. Pete is also full-time Professor of Jazz Arranging at William Paterson U.

Dylan Pramuk, singing bass, who first connected with London as a student at the New School, has since gained a Masters Degree in Vocal Jazz and now teaches at NYU, City College,  Montclair State U and Jazz House Kids. It was a shared passion for Lambert, Hendricks and Ross that led London, Pramuk and Ross to found The Royal Bopsters in 2012.  Pramuk arranged seven of the tracks on the album, bringing a strong talent for writing and a flair for the dramatic to the stage.

Party of Four Track By Track.
(Derived from the liner notes by Michael Bourne.)

Party of Four begins with a rousing rendition of the Gershwin classic “But Not for Me,” where the voices riff around each other, masterfully emulating the sound of a big band via Pete McGuinness’s arrangement  Celebrating the classic Chet Baker recording of this song, the group presents a soli section; Chet’s wonderful scat solo expertly harmonized for the vocal ensemble.  Holli’s extra lyrics question why the song’s loveless melancholic wastes so much time on a fruitless endeavor like love.

The album continues with a medley arranged by Dylan Pramuk.  “On A Misty Night/The Gipsy” is inspired by two classic recordings: the 1972 Tadd Dameron big band arrangement on the album The Magic Touch, and a vocalese written by Georgie Fame to a solo of Chet Baker.  The piece features jazz luminary Christian McBride, who begins the track with a call-and-response with the ensemble.  McBride embarks on a beautiful solo, while the Bopsters add rhythmic hits behind his thunderous bass.

“How I Love You (Let Me Count the Reasons),” another Dylan Pramuk arrangement, begins with a solo voice accompanied by Cameron Brown on bass, with periodic harmonic accents coming from the remainder of the group.  This tender ballad is based on a Dexter Gordon improvisation over the William Best and Ivory Watson song “(I Love You) For Sentimental Reasons.”  This heartfelt vocalese was initially written by Pramuk for the occasion of his wedding.  “Performed as a surprise for my lovely bride,” said Dylan, “I’ve interpolated Elizabeth Barrett Browning’s romantic ‘Sonnet 43. How do I love thee?  Let me count the ways.’”

“Lucky to be Me” features the incomparable NEA Jazz Master Sheila Jordan.  A long-time champion of the group, Sheila performed with them in London, Athens, and at the 2019 Newport Jazz Festival.  After the Bopsters’ rubato verse, the renowned duo of Sheila Jordan and bassist Cameron Brown launch the melody and Sheila scats a chorus, magically.  Dylan integrates a half-chorus of a Bill Evans solo, adding lyrics before a laughing Sheila returns to the song from On the Town.

“Why’d You Do Me the Way You Did?,” a Steve Schmidt composition with lyrics by Mark Murphy and additional lyrics by Amy London, tells the tale of a love affair gone wrong.  The ensemble tastefully integrates soulful harmonies to accompany London.

Showing the group’s stunning range, the Bopsters lend their vocal prowess to the Tito Puente classic “Cuando Te Vea (When I See You).”  The track features lyrics translated by Holli Ross, a deeply grooving tumbao from bassist Christian McBride, an improvised “mouth trombone” solo from Pete (who incidentally played the real thing professionally for many years) and an overall fiery arrangement from Pramuk.

The next track “Baby You Should Know It” features the late Bob Dorough.  In this performance, which is one of his final recordings, Dorough reaches back to a selection from his 1966 album Just About Everything…  Holli remarked “The song has that familiar Bob humor, that insistence, that ‘Why should I waste my time with all that love talk, when Baby, you should know it!’”  Dorough’s impish voice adorns this bluesy track with gripping harmonies delivered by the Bopsters.

The group achieves a shimmering bright swing with “Our Spring Song.”  A gorgeous original, composed and arranged by Pete McGuinness with lyrics by Amy London, the group’s dazzling harmonic prowess is featured in a group-scat soli based on a sax section of Pete’s big band arrangement.

“Rusty Dusty Blues” gives the album a healthy dose of sultry blues.  The version here features a cheeky vocalese written by Jon Hendricks, based on the improvisation of Count Basie’s band.

Arranged by Pete McGuinness, “Infant Eyes” offers an arresting performance of one of Wayne Shorter’s most beautiful compositions in a decidedly fresh context.  Steve Schmidt is featured on piano.

Finally, McGuinness shines on “My Shining Hour,” displaying his stunning facility for melodic invention in a scat solo over this Johnny Mercer classic which originated in a 1943 Fred Astaire musical The Sky’s the Limit.