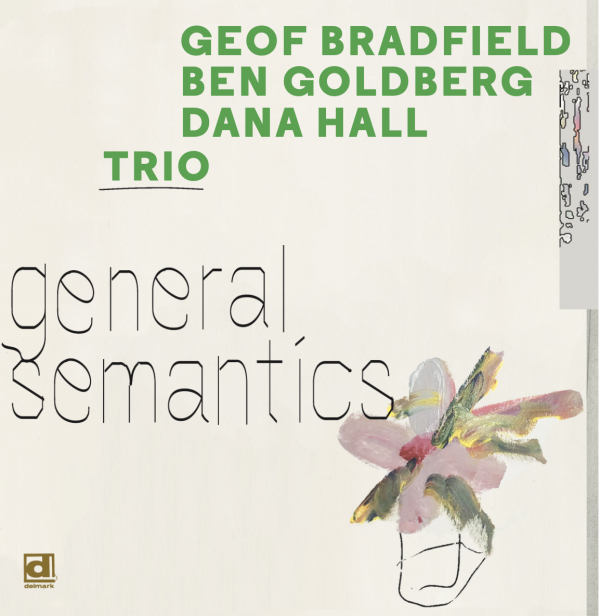 To be released September 18, 2020 on Delmark Records

Delmark Records is proud to announce the September 18th release General Semantics, a collaboration between the renowned reedists and composers Geof Bradfield and Ben Goldberg along with percussionist Dana Hall.  This release marks the debut of this exciting trio with a unique instrumentation, the confluence of reed instruments with percussion.  A masterwork of rhythmic and melodic intrigue, General Semantics features original music by the trio as well as unique interpretations of Duke Ellington, Cecil Taylor, and Hermeto Pascoal classics.  Bradfield is featured on soprano and tenor saxophone, and bass clarinet, Ben Goldberg on clarinet and contra alto clarinet and Dana Hall is featured on percussion.

Recorded in Fall 2018, General Semantics is a stunning document of an adventurous musical outing from three world-class musicians.  The fresh vitality that emanates from each track of this ambitious outing stems partially from the fact that Bradfield and Goldberg had not played together until the week of this album’s recording.  “Ben is incredibly prolific and has such a voice, I’ve admired his writing for years,” Bradfield notes.  The concept for this trio was born in 2017 on a chance encounter between the three musicians at the Hyde Park Jazz Festival in Chicago.  “The music came together easily as we discovered our common vocabulary and musical intentions.” Goldberg notes, “For me it was a thrill to be drawn a little more deeply into the astonishing musical culture of Chicago, by two of its more wide-ranging and active instigators.”  The longevity of the relationship of Bradfield and Hall, who have played together for 20+ years, is apparent when one notes the incomparable synergy and cohesiveness displayed on this release.

Regarding the pared-down nature of the ensemble, Bradfield remarks: “…the unusual instrumentation, especially the lack of a bassist, enables the musicians to transcend traditional instrument roles of accompaniment, improvisation, and interaction and create music that embraces form and harmony alongside freedom and spontaneous improvisation.”  The organic interplay between the three players in this group allows for the beautiful impromptu fluctuation between collective improvisation and singular melodic invention with sensitive support from the others.

The album begins with the group’s take on Cecil Taylor’s “Air”. Composed in the 1960’s, this rendition is based on a version from Steve Lacy’s 1961 album The Straight Horn of Steve Lacy.  Goldberg studied briefly with Lacy, and he’s had a huge influence on both horn players.  This take begins with a ceremonious fill by Hall followed by an intense, brooding melody and contrapuntal improvisation between Bradfield and Goldberg, filling the sonic range with first-rate melodic invention.

Goldberg’s playful composition “Hit Flip Switch” features soprano saxophone paired with soprano clarinet.  The piece perfectly exemplifies the feeling of joy that pervades New Orleans Jazz.  Bradfield notes “I love the vibe that we got on the live performance recording.  The house was packed, people were sitting right on top of us… that memory is especially poignant right now in the time of COVID.”  The same instrumentation is employed on Bradfield’s arrangement of Hermeto Pascoal’s “8 de Agosto”.  A contrapuntal melody leads to a collective improvisation that demonstrates the players’ stunning improvisational facility.  Bradfield and Goldberg play simultaneous melodic lines that weave together like the cogs of a finely-tuned machine.  Bradfield explains that Hermeto Pascoal “wrote a song every day for a year so that everyone would have a song for their birthday,” as he notes that August 8th is Ben’s birthday, fittingly enough.

“Half the Fun” begins with a fantastic contra-alto clarinet solo before moving towards a driving ostinato while Bradfield explores the melody.  Bradfield’s  arrangement is a reduction of an Ellington Big Band recording and it conjures the feel and density of the original with a fraction of the instrumentation.  The release concludes with “Under and Over”, beginning with Bradfield’s fervent melodic refrains accompanied by Hall’s rhythmic musings.  The ensemble falls into a supple groove, with Goldberg taking the lead on a blues-tinged melody.

This departure from the large ensemble venture of Bradfield’s 2018 Delmark debut Yes, and…Music for Nine Improvisers offers a completely different context to hear these three celebrated musicians.  Bradfield, Goldberg and Hall offer up an evocative release that explores new works as well as powerful compositions by some of the most intriguing artists of yesteryear.

“Geof Bradfield has drawn plenty of praise for his work as a reed soloist, and it’s all deserved… But in the last few years, Bradfield has made just as much impact with his precise and colorful writing, in compositions that evoke a vivid sense of place through the same mixture of detail and sweep.” Neil Tesser

A committed educator, Bradfield is Professor of Jazz Studies at Northern Illinois University and has given master classes and lectures at the Brubeck Institute, the Manhattan School of Music, the Jazz Education Network conference, and numerous other national and international venues.

Beginning in 1992, when his group New Klezmer Trio “kicked open the door for radical experiments with Ashkenazi roots music” (SF Chronicle), clarinetist Ben Goldberg has established himself as “one of the most vibrant, flexible, and inventive clarinetists in jazz and improvised music” (Downbeat), “an artist who seems to find beautiful melodies at the end of every path.” (NPR). Through his many bands and compositional projects The New York Times has noted Ben’s music for “a feeling of joyous research into the basics of polyphony and collective improvising,” and he was named #1 Rising Star Clarinetist in the Downbeat Critics Poll in both 2011 and 2013. In 2015 Ben released Orphic Machine, a song-cycle with lyrics from the “speculative poetics” of Allen Grossman, performed by a nine piece ensemble including Nels Cline, Ron Miles, Myra Melford, and Ches Smith, and sung by violinist Carla Kihlstedt. The LA Times called Orphic Machine “knotted and occasionally spooky composition marked by dazzling interplay.”

Ben leads or co-leads The Out Louds, Invisible Guy, Unfold Ordinary Mind; Go Home, “a searching ensemble that welcomes lyrical improvisation while embracing the groove” (The New Yorker); Ben Goldberg School; and Ben Goldberg Trio with Greg Cohen and Kenny Wollesen. He is a member of the avant-chamber jazz ensemble Tin Hat; and performs in a duo with pianist Myra Melford called DIALOGUE.

Drummer, percussionist, composer, bandleader, ethnomusicologist, and educator Dana Hall has been an important musician on the international music scene since 1992, after leaving aerospace engineering for a life in music. Hall has professional performance and tour credits on six continents and extensive concert, club, and festival experience throughout Africa, Europe, and Asia with the ensembles of others. Former Artistic Director of the Chicago Jazz Ensemble, Hall was a member of the Terell Stafford Quintet from 2002–2015, touring extensively with the group and featured on its last four recordings.

In addition to his work in groups led by others, Hall is also the leader of a number of ensembles and projects including Black Fire, a project dedicated to the music of pianist and composer Andrew Hill and spring, a dynamic musical endeavor featuring two multi-instrumentalist woodwind specialists, acoustic bass, and his own drums, cymbals, and mbira. His debut CD Into the Light was released to great critical acclaim.

Hall is a tenured Professor of Music and the Director of Jazz Studies at DePaul University. He uses and endorses Yamaha Drums, Zildjian Cymbals, Remo Drumheads, and Vic Firth Drumsticks.