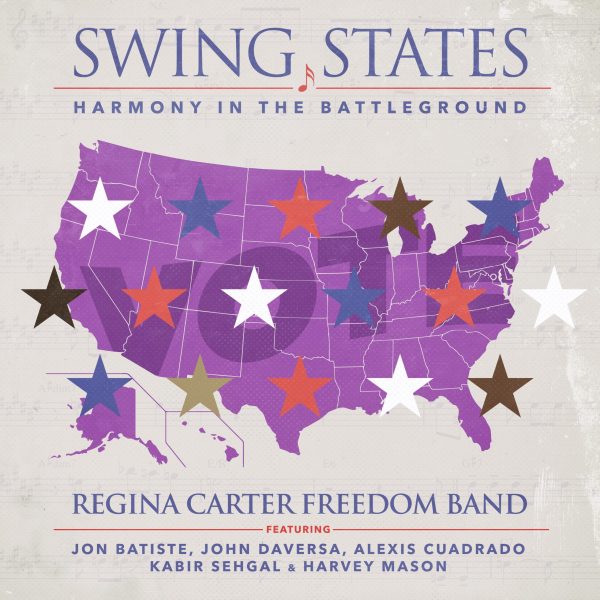 Tiger Turn/eOne is proud to announce the July 31st release of Swing States: Harmony in the Battleground, the new album from multi-GRAMMY nominee, MacArthur Fellow, and Doris Duke Award recipient, violinist Regina Carter. For this momentous release, Carter has brought together an astonishing ensemble of consummate musicians including multi-GRAMMY award winners John Daversa (trumpet, flugelhorn) and Kabir Sehgal (bass, percussion), GRAMMY nominees Harvey Mason (drums) and Jon Batiste (piano) – renowned for leading the house band on The Late Show with Stephen Colbert – alongside the widely-acclaimed Alexis Cuadrado (bass). Releasing before the most consequential election in American history, and in the wake of the COVID-19 pandemic and Black Lives Matter protests, this politically charged fourteen-track collection strives to illuminate the power of democracy and serve as a beacon of hope during these unprecedented times.

The COVID-19 pandemic has proved to be a humanitarian crisis like no other, and in 2020 – a year that serves as a hugely significant one to American politics – presents new and unfamiliar challenges to the country’s democracy. While we face this unprecedented time, celebrated musical force Regina Carter has set out to deliver an optimistic and encouraging project that extols the importance of taking part in the democratic process. Angered and dumbfounded by the sheer volume of registered voters who decided not to vote in 2016, Regina reflected, “voting is a civic duty and an extremely important responsibility, even more so now as we are living in surreal times…we have become a divided country of Red vs. Blue, Us vs. Them or Not Our Kind and that pot is starting to boil over.” On Swing States: Harmony in the Battleground, the opening track provides immediate insight into Carter’s childhood memories of the discrimination African Americans faced within the democratic system of the US as she highlights the sacrifices that many had to endure to gain the right of suffrage.

With the support of this veritable group of musical all stars, Regina selected the official (and some unofficial) songs of the “swing states” that will determine the election, such as “Pennsylvania”, “Swanee River” (Florida), and “Rocky Mountain High” (Colorado). A selection of other reimagined, apropo American classics round out the album.

A native of Michigan – a swing state with sixteen pivotal electoral votes – Regina opted to represent her home state of Michigan by including “Dancing in the Streets,” a song that is synonymous with Motown. Regina’s searing rendition of “We Shall Overcome” – an anthem of the civil rights movement that is still painfully relevant today – can also be regarded as a soundtrack for enduring and overcoming the ongoing health crisis. Representing executive producer Kabir Sehgal’s home state is “Georgia On My Mind” and as he notes, “as much as I’d like to think of my native Georgia as a swing state, for now I will have to be satisfied knowing that “Georgia On My Mind” is beloved by people of all parties.” Regina chose to close the album with the theme song to Faygo Pop, a popular soda made in Michigan and in doing so, provides the listener with some much needed levity during the current times.

Swing States: Harmony in the Battleground was recorded at the Clive Davis Institute of Recorded Music at New York University, with each of the group pieces arranged by John Daversa. Daversa also joins Kabir Sehgal on production duties, alongside Doug Davis and Harvey Mason Jr.

“The Swing States project is a musical contribution that I hope will help galvanize folks to get out, exercise their right to vote and encourage their brothers and sisters to do so as well.” – Regina Carter

Perhaps the pandemic will reveal the resiliency of American institutions as well as the innovativeness of its people. At long last there may be a concerted effort to make voting easier: early voting, absentee voting, voting by mail, perhaps even online voting. The current situation might prove to be the catalyst to enfranchise more to participate in the democratic process. Sehgal continues, “we hope that Swing States: Harmony in the Battleground helps people forget about which states are red and which are blue. We have fifty swing states (and a few territories). We’re all Americans. We’re all humans. Let’s work together to become survivors.”