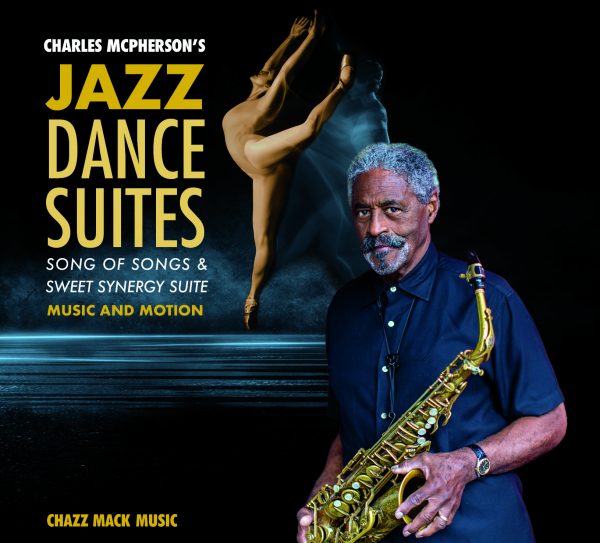 The Seminal Recording of McPherson’s Compositions for the San Diego Ballet, featuring Song of Songs and Sweet Synergy Suite

Master saxophonist, composer and bebop luminary Charles McPherson is excited to announce the September 25, 2020 release of the latest addition to his pantheon of hallmark jazz recordings, Jazz Dance Suites.  As an architect of this artform who has released inventive records since 1964, the genius of Charles McPherson has been chronicled by a vast library of recordings that span the past six decades.  Now 80 years old, McPherson’s latest release captures his groundbreaking collaboration with the San Diego Ballet, an association which began in 2015. A family affair, Jazz Dance Suites is inspired by McPherson’s daughter Camille, a soloist in her 8th season with the prestigious dance company. Joining McPherson on Jazz Dance Suites are some of the most exciting names in modern jazz; Terrell Stafford on trumpet, Lorraine Castellanos on vocals, Jeb Patton and Randy Porter on piano, Billy Drummond on drums, David Wong on bass and Yotam Silberstein on guitar.

Jazz Dance Suites demonstrates a decidedly fresh and exciting relationship between the jazz and dance artforms and speaks to McPherson’s stellar range as an artist.  Since 1972, McPherson has toured internationally both as a bandleader and as a sideman with the upper echelon of jazz greats such as Billy Eckstine, Nat Adderley, Dizzy Gillespie and Wynton Marsalis. Throughout his six decades of being an integral performer of the music, Charles has not merely remained true to his bebop origins but has expanded on them. Jazz Dance Suites is a departure from the traditional bop sensibilities of most of his previous work. It contains numerous examples of improvisational brilliance while emphasizing McPherson’s writing which demonstrates a broad range of influences and reflects a genre that is new to his compositional output: dance music.

The first suite, Song of Songs, written for the ballet in 2019,  is inspired by the Old Testament book of Song of Solomon and focuses on the theme of unrequited love. Each of the eight movements in the piece focus on an emotion expressed by or related to a character or specific event in the original text.  The opening piece “Love Dance” introduces musical ideas that appear throughout the rest of the suite.  The song begins with vocalist Lorraine Castellanos singing a melody with Middle Eastern scalar material and lyrics in Hebrew.  The track features soulful solos from McPherson, Jeb Patton and Yotam Silberstein, however these solos are short, reminding the audience that this music is created for choreography, not just as a vehicle for improvisation.  The second movement, “Heart’s Desire” is a showcase for McPherson’s sound and lyricism, his solo developing the emotional content of the melody, expressing the core intent of the piece through his kaleidoscopic sound.  “Praise” is another highlight from Song of Songs.  It is a bossa nova setting of the melody of “Love Dance” in a duet between Silberstein and Castellanos.  “The Gospel Truth” ends the suite with concentrated optimism and an ebullient volleying of solos between the members of the ensemble.

Reflection of an Election was written in response, and in protest to the 2016 U.S Presidential Election.  This piece is a selection from McPherson’s second ballet suite, Reflection, Turmoil and Hope and was adapted from its initial orchestration for saxophone, violin, cello and bass to be performed by a saxophone and rhythm section.  Here, McPherson nods at the great big band lead alto playing including pronounced scoops that are reminiscent of Johnny Hodges, and, by extension, the music of Duke Ellington.  The piece also harkens shades of Charles Mingus’ blues-fueled protest-centric pieces.  McPherson takes the listener on a powerful, intense journey that characterizes the composer’s response to the 2016 U.S election.

Sweet Synergy Suite was the first work composed by McPherson for the San Diego Ballet.  The piece as a whole prominently features jazz and Afro-Latin fusion, and reflects a wide array of musical influences over the course of the suite’s six movements.  The first movement “Sweet Synergy” is a bright-tempoed salsa influenced piece which features trumpeter Terrell Stafford engaging in a call-and-response with alto.  Jeb Patton delivers a blazing solo over McPherson’s changes.  “Delight” has a decidedly charming and highly memorable melody, employing an interweaving of unison, harmony and polyphony between the trumpet and saxophone.  Another highlight from McPherson’s seminal suite is “Song of the Sphinx”.  The track is rich with harmonic intrigue, smoothly contoured melodies and thoughtful rhythmic pacing.  The suite concludes with the sophisticated hard bop vibe of “Tropic of Capricorn” delivering the listener back to the Afro-Latin feel that started the suite.  The piece builds its dynamics in a masterful manner and displays McPherson’s incredible facility on his horn.

In the first quarter of the 20th century, jazz music was intrinsically linked to dance.  With the invention of bebop, the artform shifted away from the world of dance and towards a style that demands focused attention from listening audiences.  Now, a century later, Charles McPherson has shown us that dance and the nuance of bebop and modern jazz can exist in the same context.  As Charles McPherson’s daughter Camille notes “…dear reader, I invite you to listen. I invite you to let these suites move you as they have moved me. Let them tell you a story; let them stir your soul. And know that all of them were inspired by, conceptualized with, and danced to with the purest, boldest love imaginable.”