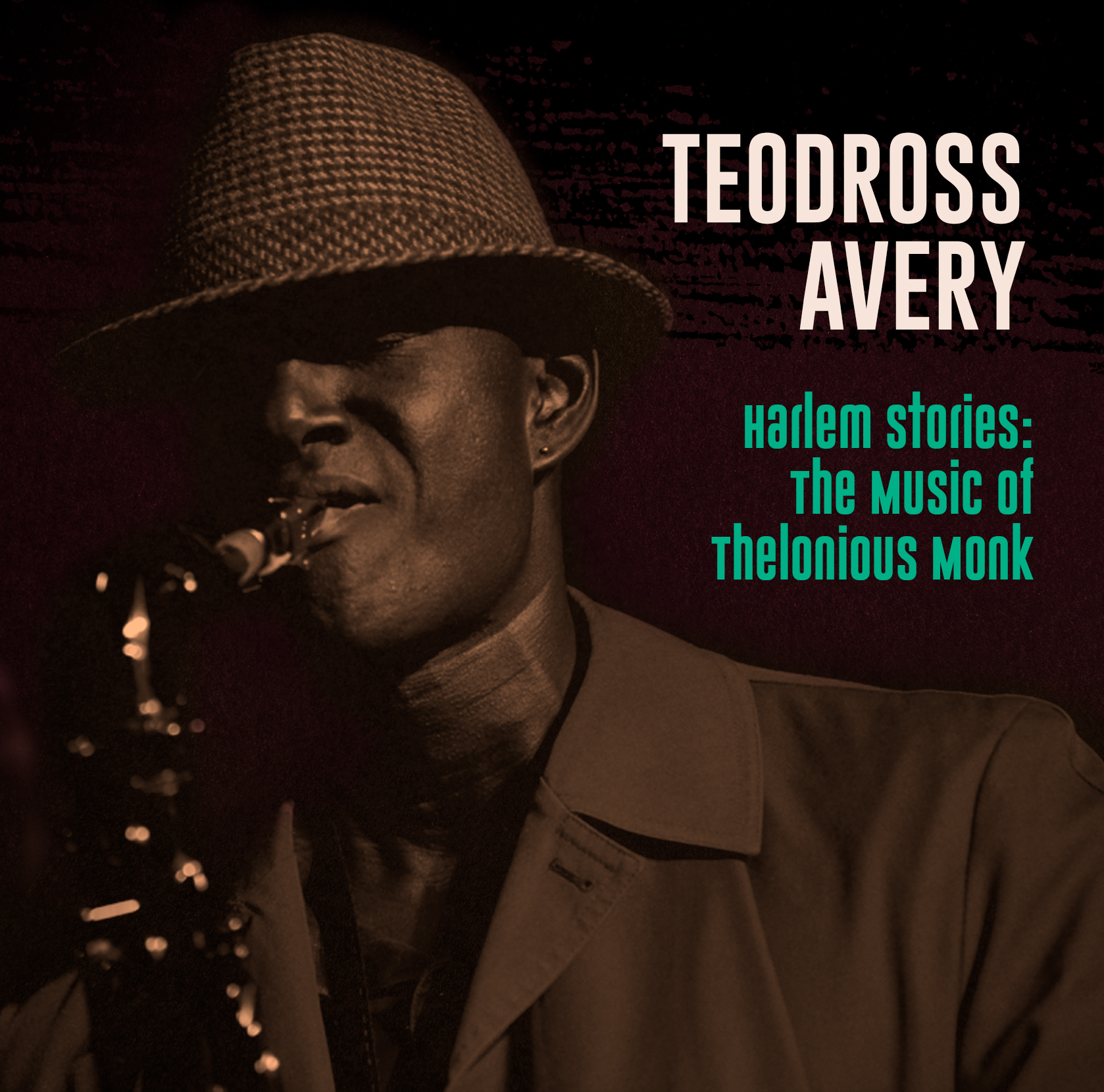 WJ3 Records is proud to announce the August 21st release of Harlem Stories: The Music of Thelonious Monk, the new album from soprano and tenor saxophonist Teodross Avery. On his ninth release as a leader, Avery delivers a ten-track collection with the support of two different quartets; the bandleader is joined by pianists Anthony Wonsey and D.D. Jackson, bassist Corcoran Holt, drummers Willie Jones III (president of WJ3 Records) and Marvin “Bugalu” Smith and percussionist Allakoi Peete. Much like his widely-acclaimed 2019 release, After the Rain: A Night for John Coltrane, Harlem Stories: The Music of Thelonious Monk is less a “tribute” to Monk than a deep study of the music – the saxophonist has a proclivity for swimming against the current, for digging deep into musical traditions and excavating raw diamonds rather than shiny objects.  To showcase this analysis and interpretation to his best, most innovative ability, Avery not only selected some of the finest musicians of their generation, but he chose artists who understood Monk’s concept of rhythm entirely on their own terms.

Avery’s studies of Monk began long ago: “When I was 15 years old, I used to listen to Monk’s album, Monk’s Dream, with the volume on 10 on my dad’s huge speakers. I began to hear how important the swing rhythm was to Thelonious Monk’s music. It became clear to me that Monk wanted his complex melodies and harmonies to affect the musicians and the listeners alike with non-stop swing rhythms. This was his method. He wanted that swing beat to just permeate the sound while he delivered his unique sound on top.” In 1991, as an eighteen-year-old freshman at the Berklee College of Music, Avery was invited by guitarist Rick Peckham to join the Thelonious Monk Ensemble. “We were playing Monk’s music from all periods of his career,” Avery recalled. “The early Blue Note recordings, The Five Spot recordings with Johnny Griffin and Roy Haynes, and the Prestige sessions with Sonny Rollins.” Avery’s profound understanding of Monk’s music is evident in his choice of repertoire, instrumentation, and bandmates. “I chose songs where melody and rhythm were so damn swinging that all you had to do was count it off and play, namely “Monk’s Dream,” “In Walked Bud,” and “Teo.” Those songs just play themselves.” Avery also chose to feature songs which clearly showcased Monk’s unique rhythmic and melodic personality such as “Boo Boo’s Birthday,” “Trinkle Tinkle,” and “Pannonica.”

Choosing the quartet format for which Monk was known is itself a bold move as it invites comparisons with the iconic bands featuring Johnny Griffin, Sonny Rollins, Charlie Rouse, and of course, Coltrane. But Avery, one of the most exciting and self-assured players of his generation, raised the stakes by putting together two different quartets: while bassist Corcoran Holt plays on all tunes, tracks 1-5 feature Anthony Wonsey on piano and Willie Jones III on drums, with tracks 6-10 featuring pianist D. D. Jackson and drummer Marvin “Bugalu” Smith. In addition, percussionist Allakoi Peete joins the first band.

The pairing of Anthony Wonsey and Willie Jones III gives the first band a more classic, hard bop feel. The group kicks off with a reimagined take on “Teo,” Monk’s homage to tenor saxophonist and longtime producer Teo Macero based loosely on the Eddie Durham tune “Topsy,” a jam session favorite at Minton’s Playhouse when Monk was the house pianist there. On “Monk’s Dream,” Wonsey and Holt’s solos are impeccably balanced, never straying from the song’s essence without sounding “Monkish”, while Avery’s powerful solo exploits the full range of the horn, bringing a Coltranian sense of vertical harmony to the tune. “Ruby, My Dear” – perhaps Monk’s best-known ballad composed for his first girlfriend, the Cuban-born Rubie Richardson – is treated with an arrangement that reflects a cha-cha rhythm, perhaps evoking some of Rubie’s Latin-by-way-of-British West Indies heritage. “Evidence” and “Rhythm-a-ning” are jam session standards. “Evidence,” a particular favorite among drummers presents the opportunity for Willie Jones III to shine while “Rhythm-a-ning” is brought back to its origins, before Monk could claim it as his own. The melody first appeared as a horn riff in Mary Lou Williams’s 1936 arrangement of “Walking and Swinging,” and then it became Charlie Christian’s riff on “I Got Rhythm” which he called “Meet Dr. Christian.”

The second band brings a more experimental sensibility to the music. Whereas the first band operates almost telepathically, this band feels more conversational, righteously cacophonous, ready to go wherever the dialogue takes them. “In Walked Bud,” Monk’s homage to his friend and mentee Bud Powell, begins with Jackson’s funky, angular, virtuosic introduction, launching the band on a journey in which each measure feels like new territory. On “Ugly Beauty,” Monk’s only composed waltz and “Pannonica,” Monk’s paean for his friend, the Baroness Pannonica de Koenigswarter, Avery switches to soprano sax. “Trinkle Tinkle” is not for the faint-hearted. Monk composed it in honor of the great “ticklers” of Harlem stride piano owing to its treacherous melody. His first recording of it in 1952 secured his place in that rarefied circle along with Willie “the Lion” Smith, Thomas “Fats” Waller, and James P. Johnson. However, it was John Coltrane’s mastery of “Trinkle Tinkle” that set the bar so high few musicians were willing to tackle it. No surprise Avery takes up the challenge, matching Coltrane note for note without ever compromising his singular voice. The band closes quite appropriately with “Boo Boo’s Birthday,” written for his daughter Barbara’s fourteenth birthday (she was born September 5, 1953). Jackson’s rubato solo piano introduction captures Boo Boo’s childhood personality—elegant and refined, sweet and spirited.

With the release of Harlem Stories: The Music of Thelonious Monk, Teodross Avery understands that while Monk’s music is universal, timeless, and knows no boundaries, its roots are planted firmly in New York. For Avery it meant Harlem: “I wanted to make sure that we brought the feeling and the spirit of Harlem into the music. Harlem has always been the center of Black American urban culture since the 1920’s and I just wanted to capture that feeling in the music. At different times the music is quick, soulful, complex, ugly and beautiful. I hope those feelings come through to the listener.”

Derived from liner notes by Robin D. G. Kelley, author of Thelonious Monk: The Life and Times of an American Original

While growing up in Oakland and Vacaville, California, Teodross Avery’s parents exposed him to a wide range of music including traditional Eastern and Western African music, Soul, Rock, and Jazz. Jolted by the sound of John Coltrane’s ‘Giant Steps,’ Teodross switched from guitar to the saxophone at thirteen. At 17, Teodross eventually won a full music scholarship to attend the prestigious Berklee College of Music in Boston.

After graduating, Teodross moved to New York City and after just one week there, he had performed at Bluenote Jazz Club with the Cedar Walton Sextet, featuring Art Farmer on trumpet. He also played and/or recorded in groups that were either led by or included jazz titans such as Hank Jones, Ben Riley, Harold Mabern, Cyrus Chestnut, Lewis Nash, Donald Harrison, Bobby Watson, The Roy Hargrove Big Band and Dee Dee Bridgewater, among many others. Teodross has also worked with the likes of Leela James, Roy Ayers, Mos Def, Lauryn Hill, Joss Stone, Talib Kweliand Matchbox Twenty. As a composer and producer, Teodross has amassed a stunning number of credits, which include the feature films Beauty Shop, Brown Sugar, and Love Jones. He has also written music for Amy Winehouse’s debut album, ‘Frank’ (Island Records).

Teodross received a Doctorate in Jazz Studies (DMA) from the University of Southern California in 2016. He holds a Masters degree in Music from the prestigious Steinhardt School of Education at New York University (2006). He is also the recipient of multiple awards, including The Sony Innovator Award (1992), The National Foundation for The Advancement in The Arts’ Clifford Brown/Stan Getz Fellowship (1992), and The NAACP ACT-SO Award (1991). Since 2017, Dr. Teodross Avery has been the head of Jazz Studies and Contemporary Music at the California State University Dominguez Hills (CSUDH).