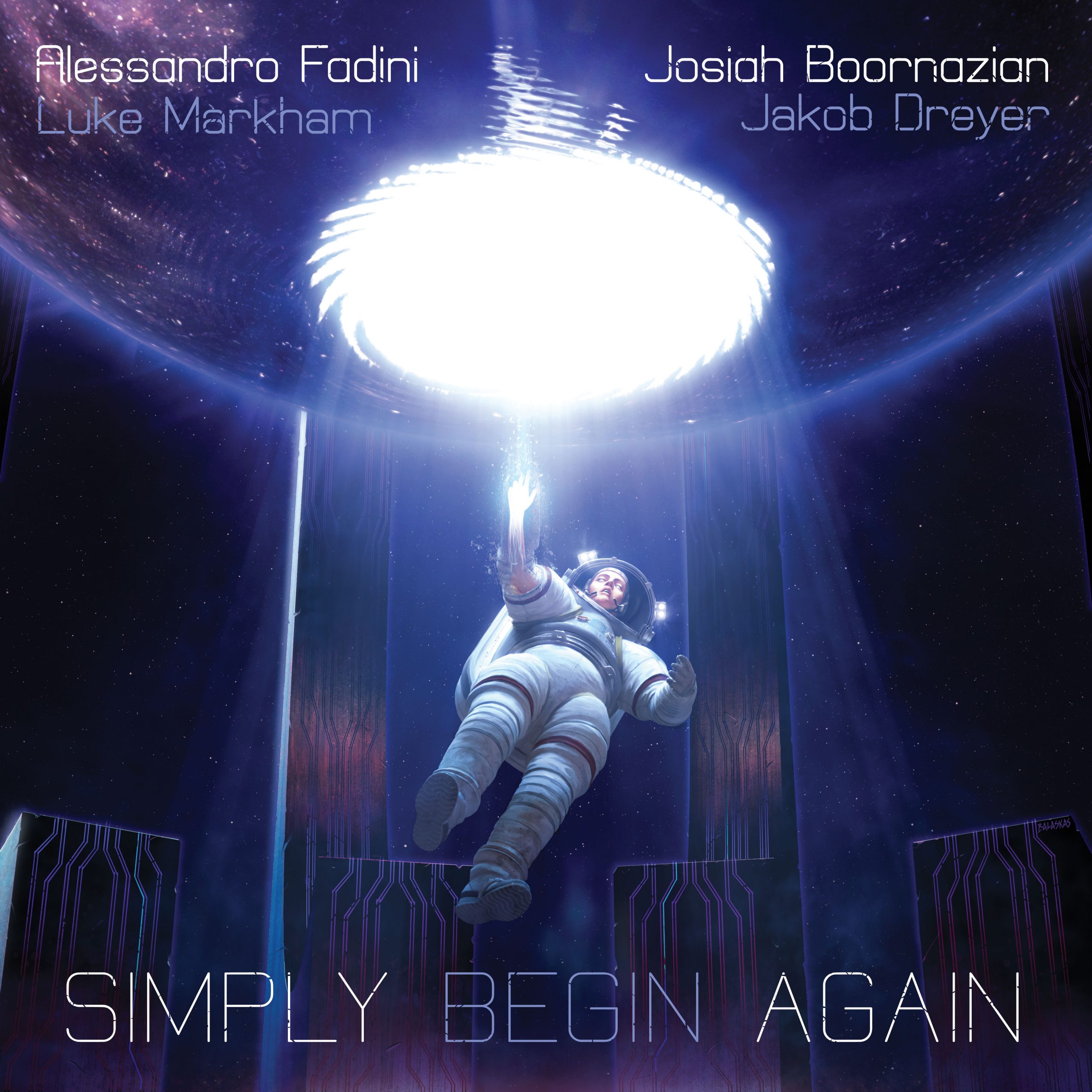 “What interests me when listening to music is  something I haven’t heard before: a twist, a surprise… notes that are a  little bit different. I smiled more than once while listening to Alessandro Fadini’s music.” -Marc Copland

Fresh Sound New Talent is proud to present Simply Begin Again, the second release by acclaimed New York City-based pianist Alessandro Fadini and alto saxophonist Josiah Boornazian. After the success of 2016’s A Dark and Stormy Day; Simply Begin Again re-introduces us to the same steadfast quartet in a brand new context.  Drawing influence from hip hop, rock and contemporary classical music, this modern jazz outfit seamlessly integrates electronic and acoustic instruments.  This amalgam demonstrates the quartet’s dedication to fuse the traditions of yesteryear with today’s innovations, both musically and technologically.  The quartet does just that while weaving otherworldly narratives of space travel and exploration that ultimately speak to the human condition.  Simply Begin Again was recorded in Paramus, New Jersey in November, 2018 and features Fadini on keys and Boornazian on saxophone along with drummer Luke Markham and bassist Jakob Dreyer.  Alongside nine new preconceived compositions, listeners will be treated to seven compositions that were freely improvised in the studio, demonstrating the inherent cohesiveness between these four musicians, which can not be overstated. Simply Begin Again was released digitally on May 20th.

A particularly lively track from Simply Begin Again, “Fermi Paradox”  is inspired by the famous Italian scientist Enrico Fermi who, among other notable achievements, first proposed paradox which asked how it is possible that, given the billions of planets in the galaxy, earthlings still have not encountered any definitive contact with or evidence of alien civilizations.  Boornazian’s experimentation with varying legato and staccato phrasing, intervallic play and masterful use of space imbues an intentionality upon the rhythm section that informs the rhythmic nuances of drummer Luke Markham and the infallibly placed chordal jabs by Fadini.  The composition is a playground for rhythmic and melodic invention, and this quartet is taking full advantage.

The title track of Simply Begin Again is a musical metaphor for the practice of mindfulness meditation.  This dynamic track guides the listener through the experience of tapping into pure consciousness while dealing with a never-ending stream of discursive thoughts.  “The melody,” according to Fadini “(representing consciousness) floats over an endless river of thoughts (represented by the drums and bass bubbling around, constantly moving). But the focus and determination of the Self (represented by the piano ostinato) remain constant, and even though feelings and emotions are in flux (symbolized by the shifting harmony and varied dynamics), everything ultimately reverts to a cyclical balance.”  The track demonstrates Fadini’s stunning facility on the keys, and right out of the gate, Boornazian offers celestial sounds from his horn processed through multiple effects pedals, adding an ethereal quality to the unique soundscapes presented by the piece.

“Mr. Impossible” tells the story of humanity’s first journey to Mars.  Each section of this cleverly constructed piece represents a phase of man’s expedition to the Red Planet.  The track features a piano solo by Fadini, the section symbolizes the first portion of the journey through space and the unaccompanied portion, Fadini indicates, “represents the moment when the spaceship reaches deep space, emphasizing the feelings of uncertainty and emptiness associated with traveling through the void of space.”  The 11/8 groove of the piece seems to add to the constant forward motion of this composition based on exploration and discovery.  The track is dedicated to saxophonist Boornazian, who Fadini espouses applies the same courage and curiosity to music that will one day get mankind to mars.

Experimenting with a tonal palette that ranges from playful to transcendent, Fadini and Boornazian steer their ensemble and audience through the dizzying infinitude of space.  Transcending the status quo, the group’s sonic exploration on this release can only be matched by its collective instrumental facility and deeply ingrained jazz sensibilities.

Alessandro Fadini is an Italian-born, New York-based pianist, composer, and app programmer. Also formally educated in advanced mathematics, Alessandro’s richly complex playing has been described as “aggressive” and “über-proficient,” and his collaborations with Boornazian are known to be “subtle and spacious.” He is currently working toward his Doctor of Musical Arts degree at Stony Brook University in Stony Brook, NY.

Josiah Boornazian is an award-winning saxophonist, composer, and educator currently active in Brownsville, Miami, New York City, Washington state, Europe, and California. Known for his use of electronic effects pedals, Ableton, free improvisation, and his unique original compositions, Josiah’s high-energy music blends jazz, electronica, rock, classical, and ethnic influences into an atmospheric and dense palette which is exciting, innovative, and wide-ranging in emotional impact. Rooted in groove-based post-fusion, Josiah’s music combines musical surprise and variety with head-thumping beats and ear-bending electronic sonic textures. Josiah holds a Doctor of Musical Arts degree from the University of Miami and is an Assistant Professor of Music of Applied Saxophone and Jazz at the University of Texas Rio Grande Valley.