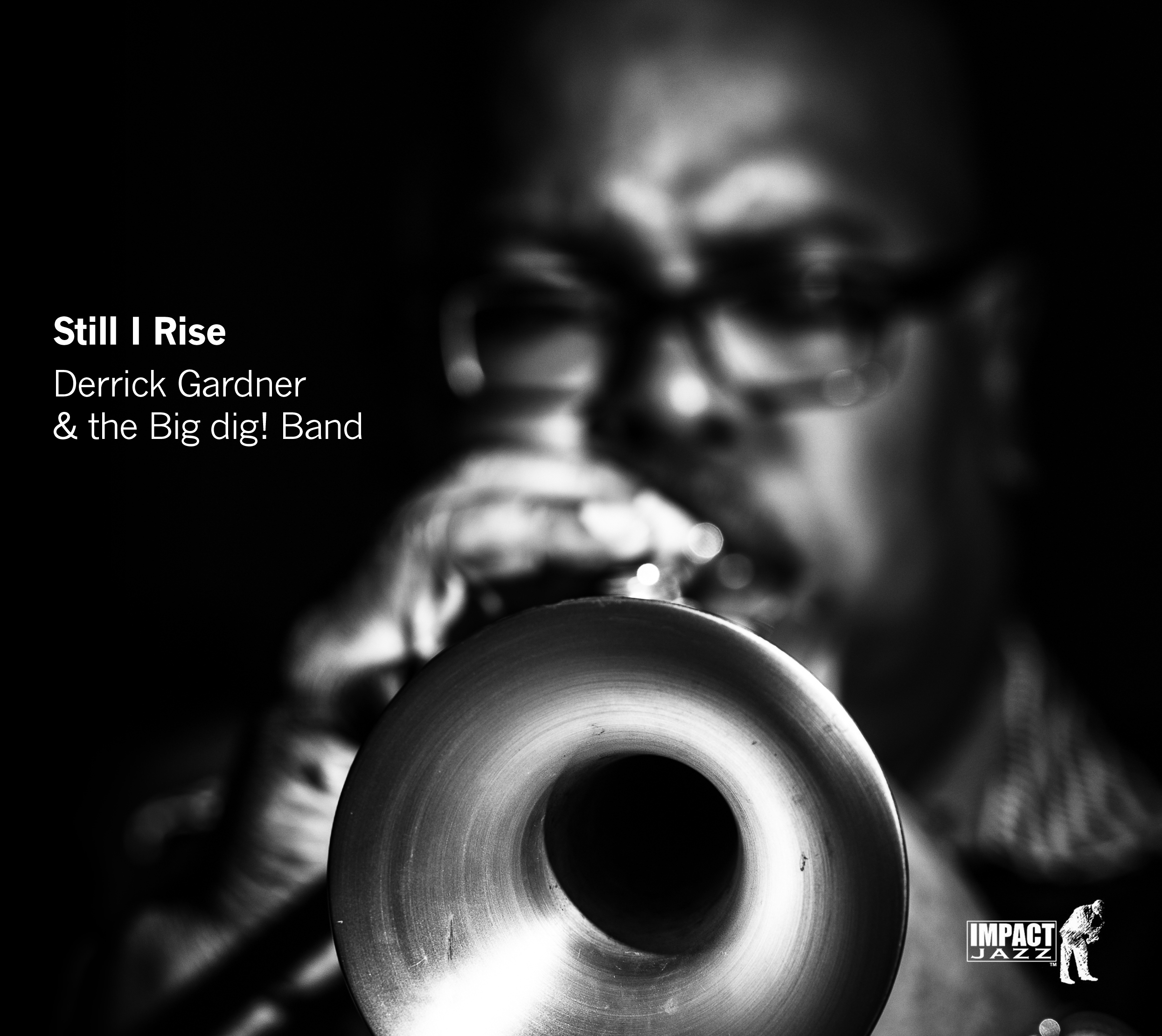 The senior members of the Big dig! Band have deep connections to some of the most important jazz orchestras in history. Derrick’s brother, Vincent Gardner has played with the Jazz at Lincoln Centre and Count Basie Orchestras, and is the artistic director of the Jazz Houston Orchestra. Mark Gross played in the Duke Ellington Orchestra while Bijon Watson has worked with the Gerald Wilson and Clayton-Hamilton Jazz Orchestras. Rob Dixon has played with the Maria Schneider Orchestra and the Illinois Jacquet Big Band. These musicians, along with Zen Zadravec, Curtis Taylor, and others, have chalked up credits with a veritable who’s who in jazz, from the Marsalis brothers and Dianna Krall to Gregory Porter, Nicholas Payton, James Carter and Benny Golson.

Since his arrival in Winnipeg in 2011, Derrick has held the Babs Asper Chair in Jazz Trumpet at the Desautels Faculty of Music at the University of Manitoba, and has instilled a love for the art form in countless students. Several of the members of the Big dig! Band—Luke Sellick, Curtis Nowosad, Tristan Martinuson, Anthony Bryson, and Kasey Kurtz—are alums of the Jazz Studies program, and are establishing themselves in New York and elsewhere. Manitoba artists Greg Gatien, Ken Gold, Jeff Johnson, Andrew Littleford, Joel Green, and Bill Green, all members of the Winnipeg Jazz Orchestra, round out the band.

Still I Rise not only showcases Derrick Gardner’s formidable skill as a trumpeter, but also his finesse as a composer and arranger. Featuring blues tunes to extravagant show-stoppers to languid ballads, Still I Rise displays Gardner’s ability as a bandleader to open spaces for not only his star players but his trailblazing youngsters to take center stage with inspired soloing.

The album opens with “Push Come da Shove,” a C-minor blues with an extended form laid over a rhythmic pedal point. The arrangement features a standout trombone section inspired by the left hand of legendary pianist McCoy Tyner as recorded on Coltrane’s “Resolution” from A Love Supreme. While the title track is dedicated to African-American poet, singer, and civil rights activist Maya Angelou, “Soulful Brother Gelispie” is dedicated to drummer Randy Gelispie, one of the unsung heroes of jazz drumming. “Melody for Trayvon” is dedicated to the African American teen Trayvon Martin, whose senseless 2012 slaying initiated a firestorm of riots and protests over gun violence. “As a composer and a student of human history, I see my music as a kind of activism. I’m invoking sadness, solemnity, and anger in the minor tonality and the weight of the orchestration—I want to create an empathic response that will move us toward eliminating this kind of sanctioned brutality,” says Gardner.

“Blues à la Burgess” is dedicated to the composer’s father Burgess Gardner, an accomplished jazz trumpeter and Derrick’s biggest influence. “My father is one of the bluesiest musicians I’ve ever heard—he’s able to find the blues in any and every tune he plays.” Compositionally, the tune is based on a phrase taken from one of Burgess’s solos. After “8 Ball, Side Pocket,” which is a contrafact based on “Corner Pocket” by the great guitarist Freddie Green, the album is brought to a close by the “hodgepodge bouquet of chaos” found in “Heavens to Murgatroyd!,” which takes its humorous title from the Hanna-Barbera cartoons of Derrick’s childhood. On the digital release of Still I Rise, fans are treated to three extra tracks: “To Whom it May Concern”, “One Thing Led to Another” and “DAAAYUUUM”. While “To Whom it May Concern” was composed as a jazz waltz with a bass feature – reminiscent of Ellington’s “Jack the Bear” and Oscar Pettiford’s “Tricotism” – “One Thing Led to Another” is a slow bossa nova in the style of  Antonio Carlos Jobim. Featuring an illuminating horn section, the compositional foundation of “DAAAYUUUM” lies in a blues melody that runs through the whole tune.

Still I Rise is a sleek, powerful and swinging project, maintaining a current and fresh delivery throughout. Beneath the skilled surface, displayed by each member of this eighteen-piece big band is a driving energy which is both musical and political.

For more information on this release, visit www.StillIRiseAlbum.com