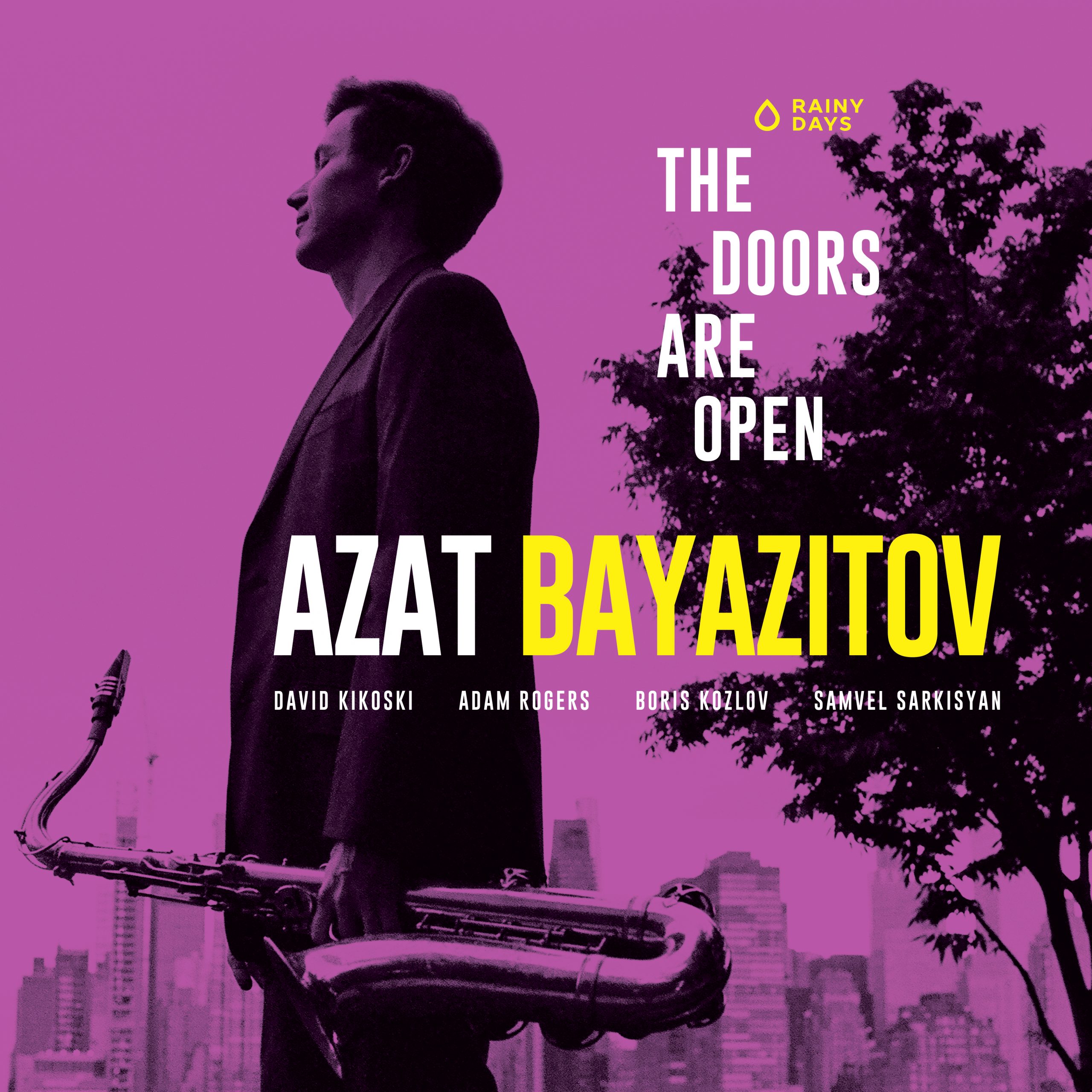 On June 19 the Russian jazz label Rainy Days Records will release the album “The Doors Are Open” by Russian saxophonist Azat Bayazitov who recorded while living in New York. This is the second solo album in the work of Azat; the first, “ If You Still Trust, ” appeared on Butman Music Records in 2015 (see an interview with Azat “Jazz.Ru” ).

As a child, Azat learned to play the violin in a music school in his native Kazan, but later his choice fell on the saxophone. After the first concert of a jazz big band that was seen – it was Oleg Lundstrem’s orchestra, which, incidentally, had Kazan roots – the young musician finally realized that he wanted to connect life with jazz. After the Kazan College of Music, Azat in 2007 went to Moscow and entered the RAM. Gnesins to the class of the legendary jazz teacher Alexander Oseychuk . During his studies at the Academy, Azat performed as a soloist in the Anatoly Kroll Orchestra Academic Band, a member of the Big Jazz Orchestra conducted by Peter Vostokov, played at different times with Boris Kozlov, Arkady Shilkloper, Oleg Butman, Igor Butman’s big band, Esh and many others. In 2013, Bayazitov headed the Philharmonic Jazz Orchestra of the Republic of Tatarstan for several months, and in 2014 he became the soloist of the Moscow Jazz Orchestra in Moscow under the direction of Igor Butman , in which he worked for three years.

In 2017, Azat Bayazitov appeared on the New York jazz scene. Now he is 32. In an interview with the famous American jazz journalist Ted Panken, he says:

– If you play [in New York] only jazz, you have only jazz works. If you play all the music, you will have all other works too. I earn only music. I play with rock bands, play funk and latin music. I play in churches. In New York there is a wide range of different kinds of music, nothing like that anywhere else.

The recording of his new album, held at Bunker Studio in New York on May 12, 2019 (sound engineer Aaron Nevezi ), was attended by musicians of different generations, whom love for jazz brought to New York from different parts. 24-year-old drummer Samvel Sargsyan, originally from Rostov-on-Don, graduated from the legendary jazz school for them. Kim Nazaretova, then studied at the Prince Klaus Conservatory in Groningin (Netherlands), and then went to the capital of world jazz to continue his studies at the School of Music. Aaron Copland at City University of New York. 52-year-old double bass player Boris Kozlov – from the second wave of “Russian jazz emigration”: the student of the legendary Anatoly Sobolev has been working in New York since 1991 and now is one of the most sought-after jazz bassists in the jazz capital, has been playing the repertoire projects Mingus Big Band and Mingus Dynasty for 22 years on the double bass Charles Mingus himself and recorded with many musicians, including the pianist ensemble Dave Kikoski . 59-year-old Dave first met with a young saxophonist from Tatarstan at a jam in Moscow in 2013. He is from New Jersey, in New York for 35 years, has toured the world a lot, has been to Russia more than once, including with the Opus 5 project , which plays with Boris Kozlov, is recorded with all jazz New York, primarily on the influential Criss Cross label . The 55-year-old guitarist Adam Rogers also released his albums on the same label , and for other record companies he recorded in the ensembles of Randy Brecker, Regina Carter, Norah Jones, Chris Potter and others. He is the only New Yorker on this album, symbolizing the worldwide unity of the jazz community. And, as Bayazitov emphasizes in an interview with Ted Panken, he saw his task on this album as giving freedom to the interpretation of music to all participants in the recording. By the way, the American interviewer notes, the name of the saxophonist, Azat, in Tatar means “free”.

Azat wrote the music for all eight tracks on the album himself. The programmatic names of many plays prompt the listener with images that inspired a musician from Russia. The “huge sky of Kazan” is dedicated to his native city, which probably should be hinted at by the first few measures of the opening solo cadence, in which you hear the echo of Tatar folk pentatonic scale; but then the cadence takes on the features of the blues, and with the introduction of the rhythm section in the imagination of the listener, the familiar features of Billy Joel’s “New York State of Soul” suddenly come to life – in which, however, there wasn’t such a monumental blues double bass solo as Boris Kozlov played here.

Azat wrote the theme “On the Other Side of the Bridge” on his first trip to New York with Igor Butman’s Moscow Jazz Orchestra in 2014, when he sat on the Brooklyn side of the East River, looked at the Brooklyn Bridge, at the skyscrapers of Manhattan and imagined that one day he could have settled there, behind the bridge. And on his second trip with the Butman’s orchestra across America, the musician first visited the wide expanses of the central regions of the United States, and these impressions formed the basis of the difficult play “The Engine of the Midwest”. Here, the composer embodies the impressions of changing landscapes outside the train windows and changes in the tempo of movement of an old train with a large locomotive pipe, alternating rhythmic drawings of jazz funk and jazz waltz. These alternations generate contrasting grounds for both Dave Kikoski’s resilient piano solo and Bayazitov’s fluid solo episodes.

The composer also takes up the idea of ​​alternating simple elements to create a complex structure in the title track of the album, “Doors are Open,” the title of which he interprets as the idea of ​​jazz as such – such as he sees it: freedom of choice inside a carefully defined form. For Bayazitov, this is the freedom to choose any of the many doors that open up the corridors of the development of the improvisational thought of the soloists, outlined by the form of composer’s will. Here it is Bayazitov himself on a tenor saxophone and Adam Rogers on an electric guitar, choosing ever new branching rhythmic and melodic moves and transitions behind the doors, which opens to them the alternation of only two chords underlying this composition.

Along with the opening and title plays, bright and difficult melodic material lies at the heart of the final track of the album, the name of which was coined by fellow countryman and long-time associate of Azat, Kazan pianist Andrei Rudenko, sounds so good in American English (“ A Highway To The Dreams“) And so poorly translated into Russian – except perhaps allegorically:” The direct path to the dream. ” This material opens up rich melodic opportunities for soloists (guitar solo Rogers stands out), but it is on the final track that the memorable solo of drummer Sargsyan sounds – fervent, modern and convincing, despite the brevity: it is noticeable that the young musician has a biting funky rhythm, which before that The USA managed to record only on the newest album of vibraphonist Joe Locke (2018), it is most suitable for temperament.

In the advertising production of the St. Petersburg-based record company Rainy Days Records , which releases this album, one can often find the ironically provocative slogan “Bebop Is Dead” (“Bebop died”). The label’s artistic director, drummer Sasha Mashin , said in an interview with Jazz.ruthat the goal of a new record company is to break beyond the bounds of stereotyped thinking, which in jazz is often expressed in the desire to “fight and die so that everything is played the way they were played in forty-one or fifty-two,” and if a musician is looking for new ways, then he is harassed: “bebop can’t be played like that!” Of course, Mashin does not call for a ban on the historical styles of jazz, including the 1940-50s bebop. – he seeks to develop music of the 21st century at the turn of the second and third decades of the 21st century, and not to “endlessly reproduce what was invented then.” He sees the meaning of Rainy Days Records.it is in this. And one cannot fail to admit that the new album by Azat Bayazitov, which was produced by Mashin, really contains music of the 21st century – but only deeply rooted in the notorious “bebop”, which is in the interview two years ago (and on the advertising products of his record company ) was chosen as an ironic target, a symbol of everything inert and obsolete. Bayazitov’s album proves that bebop in its pure form, of course, turned into museum music – but at the same time it is paradoxically alive, because the bebop ideas gave rise to those development vectors of post-bop styles that were developed, say, in a game on the same tenor saxophone Sonny Rollins, John Coltrane, Joe Henderson, Hank Mobley, Michael Brecker, Joshua Redman – that is, those whose influence shaped the way Azat Bayazitov plays and ideas, which Azat develops in his music. Bebop, of course, died – but, as they say, “he did not die very well.” And this inspires hope that for the successful development of jazz art it is not at all necessary to completely abandon one’s own history.
VIDEO: The Doors Are Open album trailer