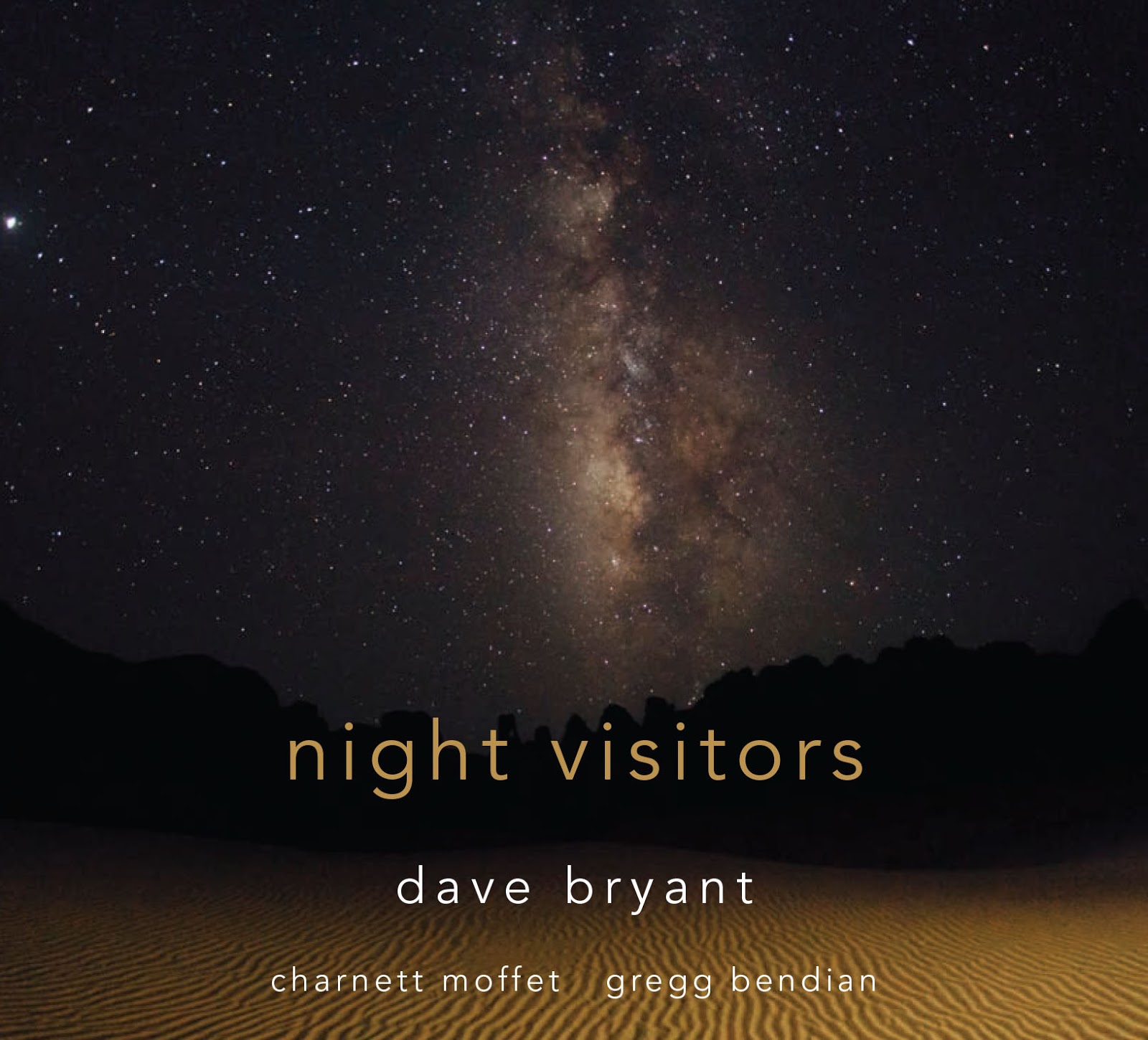 Pianist, keyboardist, composer and electronic musician Dave Bryant is excited to announce the June 19th release of Night Visitors, debuting a new trio with a stellar rhythm section.  Consummate pianist and former Ornette Coleman collaborator Dave Bryant, one of the few keyboardists Coleman ever performed and recorded with, celebrates the compositional and improvisational methodology of the late saxophone titan.  Fans of Ornette’s recordings with Prime Time will immediately recognize the sweet-and-sour harmolodic sounds that permeate the eleven tracks on Night Visitors. Bassist Charnett Moffett and multi-percussionist Gregg Bendian join forces with the ex-Prime Time keyboardist to take harmolodics into uncharted musical waters, attuned to each other’s melodic invention, their individual lines embracing anew when they meet to resolve a theme.

Night Visitors is a fascinating, inspiring, and memorable album, especially if you’re a fan of edgy, hard-hitting jazz spiced with flashes of electronics.  Not one to rest on his laurels or remain immersed in the past, however, Bryant’s take on Coleman’s unique musical theory is fresh and ever-evolving, and the recording’s harmolodic influences are balanced by a host of other strands from jazz, rock, blues, and beyond.  The undeniable creative chemistry between these three seasoned improvisers is evident from the first moments of the album’s first track.

The first track of this release, “Lime Pickle” started its life as an exercise for Bryant’s students. The bass line employs all twelve tones of the chromatic scale. A near-inscrutable and somewhat jarring rhythmic turnaround gives this trio version a manic, skittering feel in contrast with the melody’s rhapsodic quality. The result is piquant and spicy with a lingering flavor; much like its namesake, an Indian condiment enjoyed by Bryant and his son. Bendian and Moffett are full-on from the first note, never letting up or boiling over.

A dedication to comic book artist Jim Steranko (a personal friend of both Bryant and Bendian) for his 80th birthday, “Scorpio 80” stands out as the only overtly straight ahead, blues-based tune on the recording. The swaggering rhythm, MIDI-generated horn stabs, and bluesy minor key harmonies impart a gritty film noir sound—the Scorpio in the title refers to the arch nemesis of Nick Fury, one of Steranko’s best-known characters, as well as the artist’s astrological sign.

The album’s sole cover tune, “Dee Dee” was written by Ornette Coleman for jazz photographer Dee Kalea, with whom the saxophonist had close familial ties.  One of Coleman’s giddy up-tempo themes, Bryant gives the tune an organ trio interpretation.  The incredibly flexible musicianship displayed by both Moffett and Bendian on this piece reinforces the sense that they may be two of only a very small handful of musicians on the planet who can comfortably embrace free jazz, jazz-rock, harmolodic concepts, and the grits-and-gravy ’60s funky organ trio thing.

Closing the album on a mysterious, introspective note, “Three Night Visitors” is a three-part suite that combines spontaneous improvisation and predetermined compositional elements in a seamless continuum. Several of the piece’s most important features, such as Bendian’s use of the glockenspiel and dumbek and Moffett’s unifying ostinato, were conceived on the spot. Distinctive electronic effects on the lead keyboard sound impart a shimmering ‘desert mirage’ effect.

A Virginia native who gravitated towards more adventurous modern jazz, Bryant was fascinated early on by Ornette Coleman’s music. After graduating from Berklee in 1983, Bryant initiated a correspondence with Coleman and then went on to study informally with him for the next several years. Bryant’s first recording was the pioneering avant-garde jazz-rock trio album Shock Exchange in 1986. An unfettered and energetic foray influenced by harmolodic music theories, the album jacket featured enthusiastic liner notes by Coleman. Bryant worked with Coleman off and on through the 1990s, mostly as a member of Prime Time, and appeared on Coleman’s 1995 album Tone Dialing (Harmolodic/Verve Records).

Bryant first encountered bassist Charnett Moffett while touring with Ornette in the mid-1990s, and they all later jammed together at Coleman’s home. The two were reunited by chance in 2017 in an ad hoc quartet assembled by Denardo Coleman for guitarist (and Prime Time bandmate) Bern Nix’s memorial service.

Bryant’s contact with Bendian, on the other hand, seemed predestined. Both avid comics readers, they met through legendary artist Jim Steranko. They soon discovered many mutual musical interests, including ’70s fusion and progressive rock. Prior to Night Visitors, Bryant and Bendian played together on several live gigs in Boston.