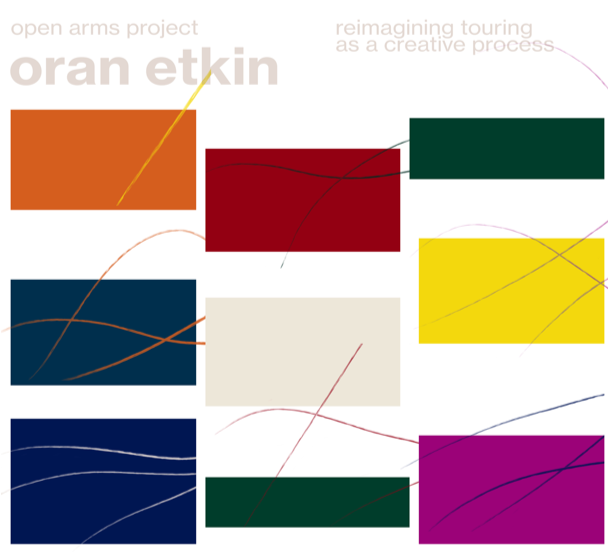 On April 17th, 2020 renowned musician and composer Oran Etkin begins the roll-out of a new recording project: Open Arms Project.  Each month, Etkin will release a new single on all major music-streaming services as well as a music video filmed and recorded around the world during his recent tours.  The April 17 and May 22 releases were recorded in Rio de Janeiro, Brazil and feature renowned vocalist and flutist Danilo Caymmi along with guitarist Davi Mello. Following months will feature collaborations in Zimbabwe, Czech Republic, France and more.

“Open Arms to me is an attitude”, reflects Etkin. “It’s felt in the warmth with which I was greeted in each country and how we welcomed each other into our musical worlds. It is at the core of how we approach making new music together with open ears, unafraid to discover a new side of ourselves outside our comfort zone.  And it’s also an answer to the rigid isolation of hate and fear that has been growing in the political discourse all around the world, in almost every country I’ve traveled to.”  Now as over half of the world’s population is under stay-at-home orders, often unable to even embrace their loved ones with open arms, this soulful musical call for a new approach to how we relate to each other seems even more prescient and relevant to our current times.

Etkin’s unique sound on the clarinet, bass-clarinet and saxophone emanates from an openness to deep musical connections that often transcend cultural and generational boundaries. Etkin began reimagining how touring can become part of the creative process with his Gathering Light project, released in 2014 on Motema. Flipping the traditional record-then-tour model, he first toured in Indonesia, China, Japan, Israel and West Africa and then let the rhythms and melodies he encountered influence the music he created with his New York based band. Since then, he has only deepened his concept of “gathering light”: taking time off between shows to live, perform and record with traditional mbira masters in Zimbabwe; building collaborative projects with Czech, Slovak & Roma (Gypsy) musicians in Prague; nurturing friendships and collaborations in many cities where his tours took him from Paris to São Paulo.

About The First Two Singles

The first two singles/music videos, “Retirantes” (April 17) and “É Doce Morrer No Mar” (May 22) feature guitarist Davi Mello and renowned Brazilian singer and flutist Danilo Caymmi. They are composed by and pay homage to Danilo’s father, Brazil’s legendary songwriter Dorival Caymmi. Born in 1914, Dorival Caymmi captured the spirit of his native Bahia region of Brazil and inspired a great lineage of Bahia-born musicians, from Caetano Veloso to Gilberto Gil and Gal Costa. The first song, Retirantes is based on the African-derived Ijexá rhythm prevalent in Bahia, with Mello’s guitar incorporating the traditional drum patterns.  Danilo’s flutes (he plays two traditional flutes at once) and Etkin’s clarinet dance together in intertwining rhythmic patterns. The second song, É Doce Morrer No Mar (How Sweet To Die In The Ocean) speaks of a sailor dying in the lap of Iemanja (the Orisha of the ocean). Etkin starts the song in the sweet low register of the clarinet and as Caymmi enters, the clarinet and voice continue in dialogue like the ocean and the sailor, rising in energy until the climax in Etkin’s solo, before going back into the sweet depths to end the song.

Oran Etkin has been described as “ebullient” by New York Times and “composer of eminent individuality” by Yusef Lateef.  He was voted #1 Rising Star Clarinetist in DownBeat Magazine’s Critic’s Poll and has performed as a leader at venues including Montreal Jazz Festival, North Sea Jazz Festival, Jazz at Lincoln Center, WolfTrap, Kennedy Center and more.  He has been invited twice to be a guest lecturer at Harvard University to discuss his compositional approach and is also the founder of the Timbalooloo educational program for children.  Etkin released six albums as a leader including four on the Motema label. Etkin’s duo concert with Sullivan Fortner in Paris was chosen as one of the Top 6 Musical Highlights of the year by Liberation, which described it as “a concert of weightlessness, class, spark, inspiration and sharing. Magic uninterrupted for two hours.   The crowd went wild. For such is the music of Etkin: sensitive to the exchange with the audience.”