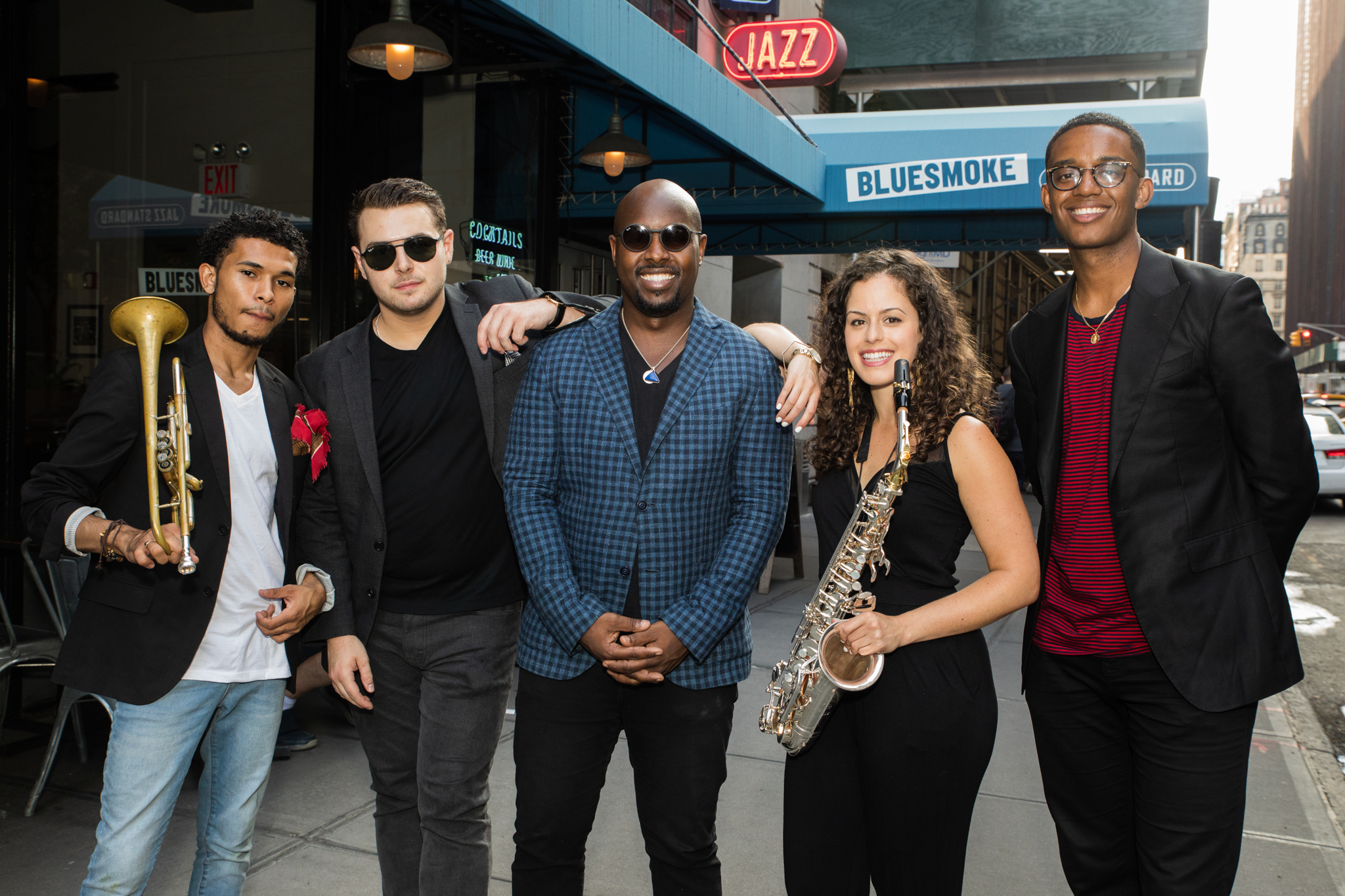 This April, celebrated Drummer Ulysses Owens Jr. hits the road with a new crop of excellent young jazz musicians.  With a nod to the legacy of Art Blakey and Betty Carter, (both of whom led long-standing bands which became educational institutions for young players), Owens ushers in the next generation of jazz titans with his latest ensemble, Generation Y.  Having discovered these young artists through his professorship at The Juilliard School and while performing regularly as a fixture on the global  jazz scene, Ulysses’ musical endeavors over the past several years mark his transition from a young lion to a celebrated veteran grooming the next generation of talent.  Generation Y features alto saxophonist and flutist Alexa Tarantino who’s work with Arturo O’Farrill, Wynton Marsalis, the Diva Orchestra and Earth, Wind and Fire has already gained her serious notoriety.  Recent Juilliard graduate Drew Anderson brings his stunning trumpet facility to the ensemble.  Luther Anderson, a recent graduate of Michigan State University, takes the piano chair.  Finally, bassist Phillip Norris has been touring with Ulysses for several years in between his current studies at the Juilliard School.

Generation Y is a dynamic group that conveys the power of the jazz tradition by showing that the future of the music is in good hands.  The ensemble kicks off their tour with an April 22nd performance at Baltimore’s Keystone Korner.  The set begins at 7:30 and tickets start at $20.  The following day, the group travels to Orlando FL for a 7:30 performance at Timucua Arts Foundation, tickets start at $10.  On April 24, Generation Y will travel to South Carolina for a 7:30 performance at The Jazz Corner, tickets are $25.  Generation Y will perform 5:45 and 8:45 sets on June 27th and 5:15 and 7:30 sets on June 28th at the Little Nell for Jazz Aspen Snowmass.

Generation Y is a quintet comprised of the most dynamic young jazz musicians on the scene. This group is dedicated to moving the music forward, with a love of the jazz tradition. Ulysses Owens Jr., has been the driving force behind such great artists as Nicholas Payton, Christian McBride, Wynton Marsalis, Mulgrew Miller, Joey Alexander and many others.

Heralded as a “powerhouse of a showman” (Glide Magazine), a “legitimate jazz triple threat” (Critical Jazz) and a drummer who “take[s] a back seat to no one” (The New York Times), performer, producer and educator Ulysses Owens Jr. goes the limit in the jazz world and beyond. Owens has been named a Rising Star by DownBeat’s Critics Poll for five years straight, 3rd Runner-Up in “Classic Drum” category by Modern Drummer Magazine “Readers Poll.” He is a recipient of the 2013 ASCAP Plus Award, the 2014 Global Music Award and the 2015 Jazz at Lincoln Center Swing! Award. Claiming four successful albums of his own (It’s Time for U, Unanimous, Onward and Upward, and Falling Forward.) Owens has also gained special attention for his performances on the GRAMMY award-winning albums Dedicated to You (Kurt Elling) The Good Feeling (Christian McBride Big Band.) GRAMMY award-nominated albums; Giant Steps, and Countdown (Joey Alexander) Out Here, Live at The Village Vanguard (Christian McBride Trio) and most recently, Nat King Cole, and Me (Gregory Porter.) An active faculty member of the Jazz Studies Program at his alma mater, The Juilliard School, Visiting Artist in Residence at Utah State University, and Faculty Artist in Residence at Edward Waters College in Jacksonville, Florida where he teaches the Music Business course. He also oversees artistic and community programming for hundreds of children and teens as Artistic Director for Don’t Miss a Beat, Inc., a youth-empowerment non-profit founded by his family in 2008 in his hometown of Jacksonville, Florida. Owens’ most recent album, “Songs of Freedom,” features the music of Abbey Lincoln, Joni Mitchell, and Nina Simone; released by the Resilience Music Alliance record label.

This album was selected by JAZZIZ Magazine of one of 10 Jazz albums to listen to in March 2019. The album features bassist René Marie, Alicia Olatuja, and Theo Bleckmann as the featured vocalists, and David Rosenthal, Allyn Johnson and Reuben Rogers in the band. Ulysses remains consistently in demand for new projects as an artist, producer, and educator, remaining one of the most sought-after drummers and thought leaders of his generation. Yet what matters to him consistently is giving back and continuing to be grateful for a new day, to make a difference in the lives of others.