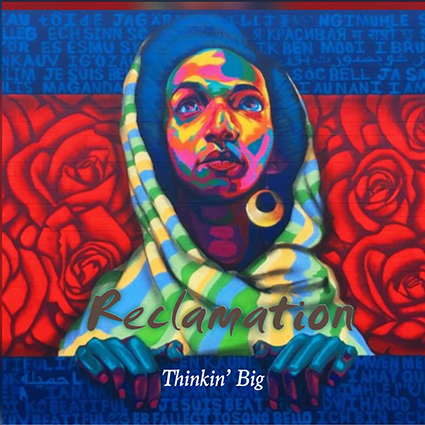 Thinkin’ Big’s the name of the twenty-piece band from Chicago that performs Jonah Francese’s material on its sophomore album Reclamation. It could, however, apply equally well to the social issues addressed by individuals of varying ethnicities and gender identities on the nineteen-track project. Said topics arise forcefully in the form of short interviews the Mexican-American Francese, a Berklee alumnus and current Chicago University PhD candidate, conducted that appear as spoken word interludes amidst the nine musical performances.

The ten interviewees, three of them musicians on the album, constitute a cross-section of minorities dealing with race, oppression, identity, gender, and equality, issues that have emerged more pointedly during the Trump era and in the wake of the #MeToo movement. With the speakers accompanied by pianist Brett White, the minute-long interludes address what it means to be a person of colour in America and the challenges immigrants face, among other things. As much as these pieces accentuate struggles, advances and successes are also mentioned, America once more showing itself to be a work in progress.

As pertinent and timely as the interview content is, it’s the band’s renderings of Francese originals and well-curated covers, all of them arranged by the bandleader, that most recommend the release. Boasting six woodwinds, five trumpets, four trombones, two guitars, and a rhythm section, Thinkin’ Big is definitely a powerful unit, and consistent with that some pieces maximize that muscular potential. But the band’s also capable of dialing it down, such that a track like “Rich Man’s Empty Pocket” sometimes plays like a small ensemble performance. While seven of the nine pieces are instrumental, with scatting appearing on one and vocals the other, track titles often allude to social and environmental issues, “Rich Man’s Empty Pocket” and “Forgotten Forests” two conspicuous examples.

“Rich Man’s Empty Pocket” initiates the musical part of the album strongly with a slow’n’sultry slice of jazz-funk, with electric pianist David Ling, bassist Neil Patton, and drummer Marshawn Fondren laying down a slinky pulse for the horns to sweetly swing over. Standout details include Fondren’s tasty snare-and-bass drum accents, smooth electric guitar and electric piano solos, and the robust wail the band gets up to during the track’s more exultant moments. An eleven-minute travelogue, “Sunburnt Daydreams” takes flight with an authoritative solo saxophone leading the charge, after which horn textures and intricate counterpoint heighten the expansiveness of this jazz orchestra performance. “Destroyer of Ignorance” bolts from the gate with a take-no-prisoners jazz-rock groove before Tracy Robertson pushes it into a soulful zone with smooth scatting and Austin Yancey rebrands it as a big band showcase with a hard-grooving baritone sax turn.

Not every moment’s intense. “Forgotten Forests” initially waxes plaintively, with acoustic piano accompanying an uncredited fiddler, until others enter to convert the piece into a big band performance and eventually a fusion workout with violin (electric, if I’m not mistaken) as the lead. The familiar sing-song melodies of “Chim Chim Cheree” (from 1964’s Mary Poppins) are nicely voiced by flutist Kristen Dye and the other woodwinds as the rhythm section buoys the tune with punchy swing, the arrangement impressing in its polyphonic splendour. A heartfelt treatment of Richard Smallwood’s gospel tune “Total Praise” caps the musical portion of the album, with vocalists Robertson, Mark Joseph, Jania Foxworth, and Lyric Rachae Stephen on hand to elevate the cover and lift the spirits.

The dynamism Thinkin’ Big brings to tracks such as “Sunburnt Daydreams,” the aggressive jazz-rocker “Humidify,” and the blues-bopper “To Ash” helps Reclamation make a strong mark, and certainly the material speaks resoundingly on Francese’s behalf as a composer and arranger. The ambitiousness of the seventy-eight-minute project impresses too, in particular the range of topics addressed and the many stylistic influences woven into the performances. One wonders, however, whether a smaller number of interludes might have been the wiser choice, given that the momentum of the musical content’s intermittently slowed by their appearance; further to that, the general message of the interviews could have been conveyed by, say, five or six as opposed to the ten presented. As caveats go, it’s a small one yet still worth mentioning.