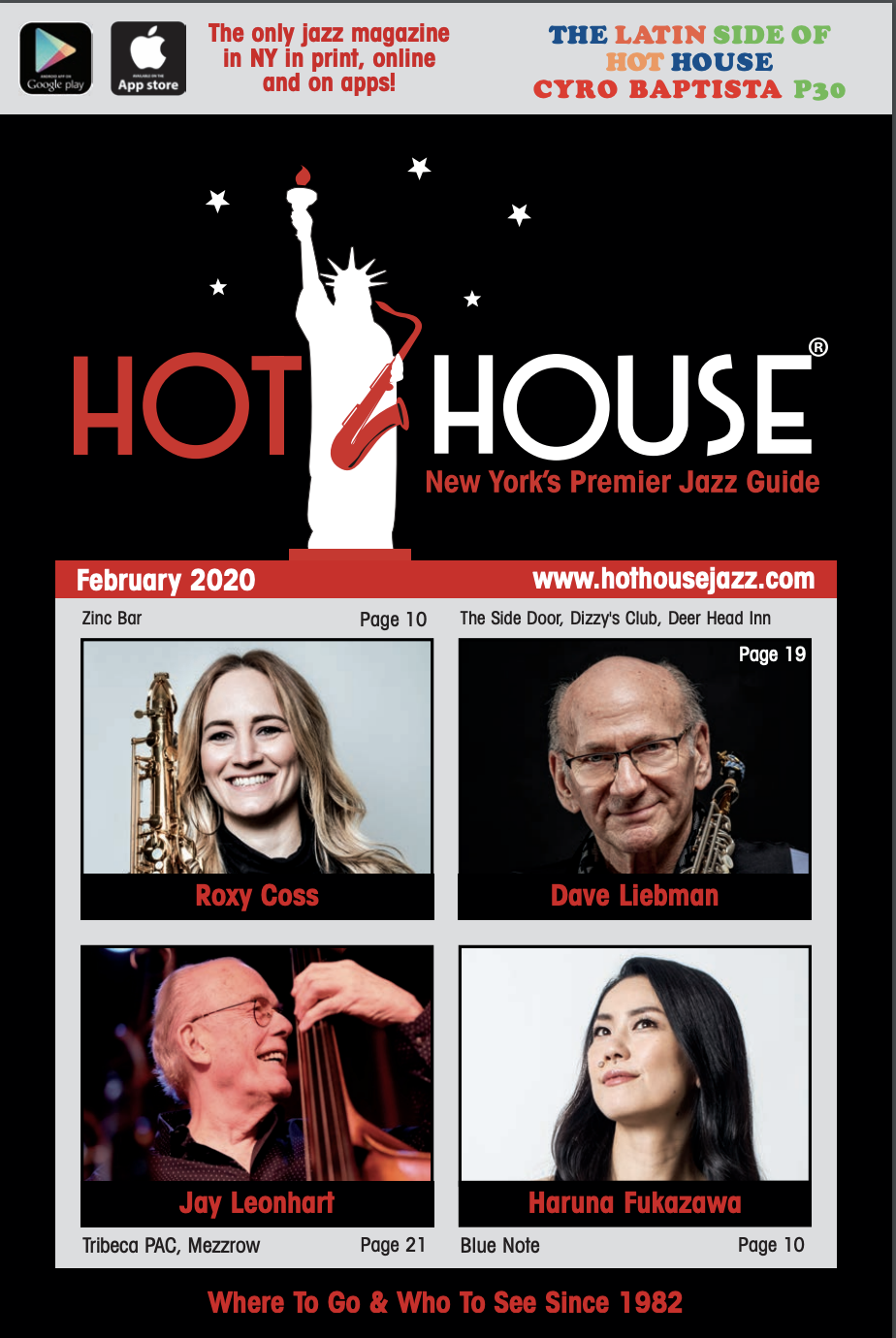 What’s notable about the two albums here is that both are distinguished by excellent ensemble execution, appealing arrangements, cogent solos and way-above-average originals. They also feature front lines that deviate creatively from the usual quintet arrangement: Sax and guitar on one; two flutes or flute and soprano sax on the other.

Quintet, from Roxy Coss (Outside In), features the tenor and soprano saxophonist’s established quartet—Miki Yamanaka on piano, Rick Rosato on bass and Jimmy Macbride on drums—augmented by guitarist Alex Wintz. They play seven of Roxy’s previously recorded originals, in fresh quintet takes, and her chart of the standard “All or Nothing at All.”

In this case, familiarity is a genuine virtue. This is a tight, potent band, easily maneuvering through Roxy’s not-always-easy charts with aplomb. Alex is a fine addition to the front line, reeling off precise, ringing solos and blending well with Roxy’s saxes—especially with the soprano—during melody passages. The soprano and guitar create a closely harmonized theme on “Breaking Point” at a fast lope, while Alex traces, lagging, Roxy’s lead on “Free to Be,” producing a fugue effect.

Roxy’s tone on tenor sax is robust and commanding, and her soprano has a distinct burring vibrato, especially in the lower register. She can wield her tenor with agility and force as she does on the uptempo pieces that bookend the CD. “Don’t Cross the Coss” is a rambunctious bebop head from sax and guitar, underpinned by a rhythm section led by Miki’s Fender Rhodes, with a boiling tenor solo plus scintillating tenor-drums exchanges. “Females Are Strong as Hell” is more soul jazz/hard bop, with the tenor sax digging into a muscular solo, then Miki (on acoustic piano) and Alex trading fours and twos.

Roxy’s tunes are all distinctive, and vary greatly. Two that stand out are the impressionistic/programmatic “Mr. President,” a Trump critique incorporating shifting times and tempos, ominous chords—including from arco bass—and even some suggestions of bolero. And there’s the engagingly romantic tenor sax ballad “Enlightenment,” over a processional shuffle from piano trio. It all makes for a completely engaging album from a saxophonist affirming her place in the jazz firmament.

Soprano sax in the City By Eugene Holley, Jr.

Soprano saxophonist, composer, educator and NEA Jazz Master Dave Liebman cut his teeth in ensembles led by Miles Davis and Elvin Jones in the 1970s. “I chose the soprano because I thought I could find something that could be Dave Liebman,” he says, “rather than Dave Liebman through Wayne Shorter, Miles or Coltrane.”

He succeeded, creating his own distinctive soprano sax sound. That’s no small feat, when you consider that the benchmarks of the instrument are John Coltrane, Wayne Shorter and Steve Lacy.

The 73-year-old’s powerful, poetic and piercing saxophone can be heard on the more than 200 recordings he has to his credit as a sideman and leader. That sound is the centerpiece of Dave’s latest CD, Earth, with his group, Expansions, consisting of pianist Bobby Avey, saxophonist Matt Vashlishan, drummer Alex Ritz and bassist Tony Marino.

Earth is the final installment of a four-album opus that started in 1997 with Water, featuring Pat Metheny, Cecil McBee and Billy Hart. Air followed in 2006, with engineer Walter Quintus; then Fire in 2016, with Kenny Werner, Jack DeJohnette and Dave Holland.

On Earth, the emphasis is on color and texture, along the lines of 20th-century classical music. The recording’s selections evoke different aspects of the planet. “Concrete Jungle” calls to mind the city’s hustle and bustle, while “Sahara,” represents the power of the sun. “Earth Theme” conjures the planet’s birth, and “Volcano/Avalanche” reminds us of the Earth’s shifting and turbulent landscape.

“This recording is a continuation, in that my compositions, which comprise this record, and the other three—Air, Fire and Water—come from impressions of these elements,” Dave says. “For example, ‘Sahara,’ one of the titles on the new record, evokes a picture of the music. I would have really been a film scorer, because [I see music] visually: You say red to me and I see it visually in its different facets, and it translates over to the horn.”

Another difference on Earth is the fact that Dave—unlike at the start of the elements recordings—is now an elder statesman and mentor. “Matt and Bobby studied with me and my wife, who teaches ear training in the Poconos,” the saxophonist says. “They’ve been a part of my tribe, and I knew what they could do. The thing is, when you’re the oldest guy in the band—in terms of experience—you bring that to the stage, and they’re thirsting for that. They want to know how I think about music. Mentoring is a great thing.”

Mentoring is something Dave had an abundance of, having worked in Miles Davis’ ’70s ensembles. He recorded on the trumpeter’s seminal albums On the Corner and Dark Magus, and with Elvin Jones on several of the drummer’s recordings, including Genesis and Live at the Lighthouse, during the same period. “Elvin did not call out a chord, or say that bar 13 is an E-flat7,” Dave says. “He didn’t say much, and neither did Miles, because he had his reputation, personality and power behind him. He was legendary, and Elvin was, too. He was like a father to me, with his sense of humanity, and the way he treated people. He was a big personality, with a big smile; Miles would turn his back [to the audience] and go back to his dressing room.”

Dave took the best of Davis’ and Jones’ leadership styles and created many ensembles and recordings covering a wide range of genres. His albums as a leader include First Visit in 1973 and Lookout Farm in 1974. In 1981, he co-founded Quest, a supergroup that was composed of pianist Richie Beirach, bassist Ron McClure and drummers Billy Hart and Al Foster.

Five years later, Dave left New York and moved to Stroudsburg, in Pennsylvania’s Poconos, where he lived for 32 years. The area was a haven for many jazz greats including Phil Woods, Urbie Green and Steve Gilmore. “My wife knew that area, and we were done with New York,” the saxophonist says.” I had been in the city my whole life.”

The release of Earth coincides with Dave’s move back to the city, and is a reminder of his time in the country. “These four elements—fire, air, water and earth—are a picture of my reflections on my Stroudsburg years,” he says. “We moved back to New York because we had our time out there. We brought up our daughter, and we were able to make a scene there. And not to be morbid, but if I began in New York, I’m going to end in New York.”

The emerging voice of trumpeter and composer Rachel Therrien displays a truly original sound. Since the release of her debut album On Track in 2011, she has shown a keen awareness of post-bop, Latin and contemporary trumpet styles. Said awareness is clear with her frequent sideperson work, in which Rachel has performed with Paquito D’Rivera, Lee Konitz and Michel Legrand, to name a few. With appearances at high-profile events such as the Montreal International Jazz Festival and accolades from top periodicals such as DownBeat, Rachel’s star will only continue to rise in 2020. The trumpeter’s quintet consisting of alto saxophonist Caroline Davis, pianist Marta Sanchez, bassist Rick Rosato and drummer Jay Sawyer joins her onstage for a concert at Birdland this month. Expect the focus to be on music from her most recent album Why Don’t You Try.

Drummer Vince Ector sports an impressive résumé. He attended the University of Pennsylvania, spent six years with the United States Army Band, and has worked with jazz luminaries including Freddie Hubbard, Randy Weston, James Moody and Jimmy Heath. Vince is both an accomplished musician and a dedicated educator: He is a lecturer in jazz percussion at Princeton University, on the Jazz for Teens faculty at NJPAC, and a sought-after artist in residence. His current tour supports the 2019 release of his critically acclaimed recording Theme for Ms. P, dedicated to his mother. His music blends jazz, funk and pop, reflecting his diverse tastes. His Plainfield gig includes alto saxophonist Justin Jones, guitarist Paul Bollenback, organist Pat Bianchi, and a special guest: saxophonist and “Jazz in the Sanctuary” artistic director Anthony Nelson.