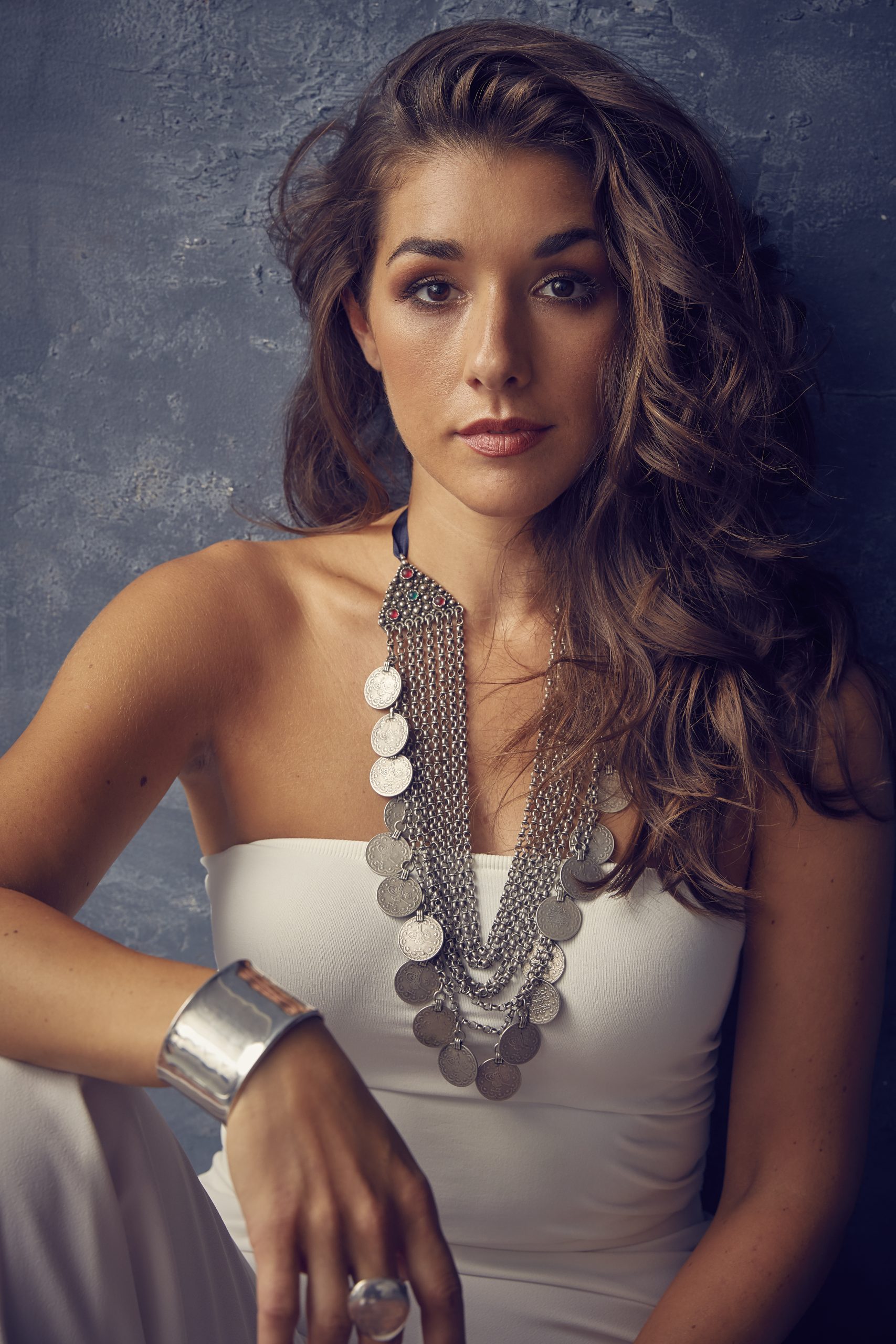 Women are the most powerful creatures on the planet, they have been the bedrock of society since time began, a stabilizing life force.  Yet, twenty years into the 21th century, despite paradigm shifts made throughout history from the likes of Harriet Tubman, Sojourner Truth, Susan B. Anthony, Indira Gandhi, and Malala Yusef among countless others around the globe, women are still fighting for basic human rights.  Vocalist Thana Alexa’s sophomore album, ONA follows five years after her debut Ode To Heroes (Harmonia Mundi/Jazz Village, 2015).  Not only is it a stunning, powerful statement on what it means to be a woman in all aspects: giver of life, friend, sister, daughter, lover, it is the most complete artistic statement to date from the PORIN (Croatian Music Academy) nominee and Downbeat Rising Star vocalist.  ONA, is Croatian for she, (coincedentally, onna no hito, is woman in Japanese) and the complete tale Alexa tells on womanhood from start to finish is riveting.  Her excellent group with keyboardist Carmen Staaf, guitarist Jordan Peters, bassist Matt Brewer, husband/co producer Antonio Sanchez on drums  in addition to the ROSA vocal group, spoken word from LGBT activist and poet Staceyann Chin and guests violinist Regina Carter and vocalist Becca Stevens, come together in a sparkling unified vision.

The title track is a rallying cry of sorts, both primal and unmistakably modern.  A drone of  voices fade in from the Rosa Vocal Group. Some of the voices utilizing striking use of quarter tones, setting the stage for a hypnotic chant in an equally so 11/8 meter.  Alexa’s lead vocal assertively takes the center with arresting lyrics for the first verse:

My roots reach into the ground

Man wants to keep me down

But my Wolfpack won’t allow

They call us nasty when

We speak above the Man

Won’t teach our girls their version of

What they want as feminine

We must be better than

Just to be equal to

Even when we succeed

Stop all your staring, boy

You’re wrong if you think

I Was born to be your toy

With these passionate searing words, the vocalist takes no quarter in expressing her stance as a human, an indictment on the political and social institutional sexism that is an unfortunate part of the modern culture.  Women are speaking up, and rising, making  so many waves, threatening the conventional power structure who are absolutely clueless as far as the struggles of people of color, LGBTQ, disabled, poor and mentally ill- the rhetoric of Alexa is challenging such forces and calling them out.  As the paradigm is finally starting to crumble,  those in power are using baseless fear tactics that are catering toward the current anti intellectual climate.  She also flexes her chops as a sensational improviser here who has grown by leaps and bounds since her work in Gene Ess’ Fractal Attraction, Michael Olatuja’s Lagos Pepper Soup, Antonio Sanchez & Migration and most recently SONICA.  Alexa glides over Sanchez’ truly interactive comping and deep listening; his drums becoming more open and resonant from the t-shirt deadened tom colors found earlier in the track.  The vocalist’s inventive improvisation punctuated with growls and wails calls upon the type of stylings found from Urzsula Dudziak and Meredith Monk, in addition to soaring high note swoops recalling Ella Fitzgerald.

Women rising is a fitting motif continuing on to “The Resistance”  Sanchez’s deadened toms, and an effects treated snare with tiny tambourine bells frame a stone groove as the singer puts forth more provocative lyrics inspired by her visit to the Women’s March.  The gathering was the biggest single day protest in American history. Critics of the protest (as told in the documentary White Savior: A History of Racism In American Churches) argued that this protest, which has done so much to move women forward, was primarily a vehicle of white women– however the impact it made was for all women.  It was an immediate mobilization of social justice, right after the election of Donald Trump, and one of the most heartening things to see in years.  Sanchez’ deep pocket groove, Brewer’s vamping bass and Staaf’s Fender Rhodes  lay a wonderful cushion as Alexa moves through the verse, the drummer’s Bonham cum Blakey bass drum triplets  add considerable momentum.  The spoken word from LGBTQ activist Staceyann Chin’s fiery invocation, appropriately places volcanic drums underneath echoing her scorching fervor.  The reprise of the chorus with it’s marching snare is positively adrenaline pumping and the tune ends cathartically with layers of melodic development over attractive chords.

“Pachamama” is a moving lament to Pachamama, the goddess of the Andes, and is a deep reminder that Earth is a mother to us all.  Alexa sings with some of the deepest tenderness and maturity on the album, Matt Brewer’s gorgeous melodic bass solo hangs the gentle caress of Sanchez’ cymbals, and guest Regina Carter’s violin solo drips with emotion and a deep cerulean hue that makes the 11 minute ballad more than engaging.

Alexa’s second offering to her late brother and best friend Niki, “Set Free” is another treasure of a ballad.  The lyrical content explores the nature of the soul, and the concept of the soul as energy.  The track, a follow up to “Ghost Hawk” on the debut album is every bit as moving  and deeply emotional, the listener can imagine the kind of person Niki was, and how much a part of the ever present.  He lives through the vocalist, and through this touching piece, the listener truly gets to know him.  “Teardrop” a hit from trip hop group Massive Attack. has been a tour de force live staple for Alexa for years.

The piece is a vehicle for her voice as if it was a horn or drums, taking advantage of her interests in these areas.  Sanchez, with dead snare, faithfully stays true to the original rhythm, with a bit of extra seasoning, and Alexa’s interpretation of the lyrics are nuanced, as to her, the line between reality and fantasy is blurred when one deals with, love, obsession, attraction desire and all the things that entails.  The expert use of multi tracking and her flexible rich alto voice are major contributions to the overall mood of the piece.  Themes of love, desire, and sexuality are followed up on with “Animal Instinct” . Alexa’s comfort with her own sexuality in the poetic lyrics create a vivid, erotic soundscape for the listeners.  Aside from the extended technique aspect of Sanchez’ drums, Jordan Peters contributes a sensual, smoky, distorted guitar solo heightening the sensuality. “He Said, She Said” is a wonderful paean to the marriage of one of Alexa’s best friends, featuring guest vocalist, Becca Stevens.  The album closes with a truly inventive spin on Tears For Fears, classic “Everybody Wants To Rule The World”.  Alexa’s arrangement begins with an ingenious vocal vamp intro in 7/4, with the familiar lyrics section being driven by Sanchez in that time signature, while the 6/4 shuffle is only explored at the tune’s coda which one again brings back the previous layers to an immensely rewarding conclusion.

ONA is leaps and bounds above Ode To Heroes on a production level.  Alexa’s debut was produced  like your garden variety jazz record, everything sounding quite live in the studio with minimal overdubs.  Like the best pop, rock, jazz-funk and jazz-rock records, Alexa uses the studio as an instrument and explores it to the fullest capacity.  The record, largely cut at The Lab, Alexa and Sanchez’s home studio,  took over a year to complete and the effort shows.  Her skills as a producer have increased ten fold as has her comfort level with technology. Antonio Sanchez, as co producer has lended his considerable chops, so those familiar with albums such as Bad Hombre,Lines In The Sand, and his work on Sargeant Pepper Revisited, will find some familiar sonic terrain.  Sanchez uses dampening techniques and additional percussion to expand the sound of the drum set, and some of his favorite production tricks appear here.  These techniques include the reverse drums on “The Resistance”, a wide stereo spread, pans, and little sub mix details.  Alexa’s use of devices such as the TC Helicon and loopers from Boss have come in handy too, turning her voice into a virtual choir.  Everything is mastered nicely too without a lot of audio evidence of extreme brick walled, compression.  The album is a studio piece of art.

With ONA, Thana Alexa has established herself as the pre eminent vocalist of her generation.  Her deep conviction to her feelings as a woman and social change is a victory not just for biological women, LGBTQ women, women with disabilities, but ALL women, and humanity.  Alexa just doesn’t sit on the sidelines talking about what’s wrong, she actively (along with Antonio Sanchez) pursues social justice, and uses her art to create  positive change.  It is very early in the year, but ONA is already staking claim to being one of the best albums of the year, and her future development is going to be very interesting. Rise up! Rise up!